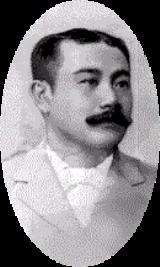 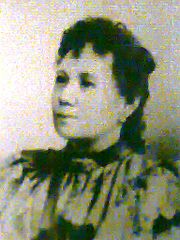 Aniceto Lacson y Ledesma (17 April 1857 in Molo
Molo, Iloilo City
Molo is one of the seven districts of Iloilo City. It was built by Spaniards and was formerly called the Parian due to its large number of Chinese residents and their business establishments in the area at the time....
, Iloilo
Iloilo
Iloilo is a province of the Philippines located in the Western Visayas region. Iloilo occupies the southeast portion of Panay Island and is bordered by Antique Province to the west and Capiz Province and the Jintotolo Channel to the north. Just off Iloilo's southeast coast is Guimaras Province,...
, Philippines
Philippines
The Philippines , officially known as the Republic of the Philippines , is a country in Southeast Asia in the western Pacific Ocean. To its north across the Luzon Strait lies Taiwan. West across the South China Sea sits Vietnam...
– 3 February 1931 in Talisay
Talisay City, Negros Occidental
Talisay City is a 5th class city in the province of Negros Occidental, Philippines. It neighbors Silay City to the north, and Bacolod City to the south. According to the August 1, 2007 census, it has a total population of 96,444 people. As of 2007, it has a total land area of 20,118 hectares...
, Negros Occidental
Negros Occidental
Negros Occidental is a province of the Philippines located in the Western Visayas region. Its capital is Bacolod City and it occupies the northwestern half of Negros Island; Negros Oriental is at the southeastern half...
, Philippines) was a sugar farmer, revolutionary general and businessman in the Philippines. He was the fifth son of seven children of Lucio Lacson y Petronila and Clara Ledesma of Iloilo, Philippines who migrated to Negros when Aniceto was still young. Aniceto’s early education began under private tutelage in Molo, Iloilo. He later studied commerce at the Ateneo Municipal de Manila
Ateneo de Manila University
The Ateneo de Manila University is a private teaching and research university run by the Society of Jesus in the Philippines. It began in 1859 when the City of Manila handed control of the Escuela Municipal de Manila in Intramuros, Manila, to the Jesuits...
, where his classmates included future general and comrade Juan Araneta
Juan Araneta
Juan Anacleto Araneta , was a pioneer sugar farmer and revolutionary leader during the Negros Revolution.-Early life:Juan was born to Romualdo Araneta and Agüeda Torres in Molo, Iloilo, Philippines...
, Dr. José Rizal
José Rizal
José Protacio Rizal Mercado y Alonso Realonda , was a Filipino polymath, patriot and the most prominent advocate for reform in the Philippines during the Spanish colonial era. He is regarded as the foremost Filipino patriot and is listed as one of the national heroes of the Philippines by...
, and other Filipinos
Filipino people
The Filipino people or Filipinos are an Austronesian ethnic group native to the islands of the Philippines. There are about 92 million Filipinos in the Philippines, and about 11 million living outside the Philippines ....
who later figured in the Philippine Revolution
Philippine Revolution
The Philippine Revolution , called the "Tagalog War" by the Spanish, was an armed military conflict between the people of the Philippines and the Spanish colonial authorities which resulted in the secession of the Philippine Islands from the Spanish Empire.The Philippine Revolution began in August...
. While a student in Manila
Manila
Manila is the capital of the Philippines. It is one of the sixteen cities forming Metro Manila.Manila is located on the eastern shores of Manila Bay and is bordered by Navotas and Caloocan to the north, Quezon City to the northeast, San Juan and Mandaluyong to the east, Makati on the southeast,...
, he had the opportunity to meet the Supremo of the Katipunan
Katipunan
The Katipunan was a Philippine revolutionary society founded by anti-Spanish Filipinos in Manila in 1892, whose primary aim was to gain independence from Spain through revolution. The society was initiated by Filipino patriots Andrés Bonifacio, Teodoro Plata, Ladislao Diwa, and others on the night...
, Andrés Bonifacio
Andres Bonifacio
Andrés Bonifacio y de Castro was a Filipino nationalist and revolutionary. He was a founder and later Supremo of the Katipunan movement which sought the independence of the Philippines from Spanish colonial rule and started the Philippine Revolution...
, with whom he had a secret blood compact
Blood compact
Blood compact was a ritual in the Philippines where tribes would cut their wrist and pour their blood into a cup filled with liquid and drink each other's blood as part of the tribal tradition to seal a friendship, a pact or treaty, or to validate an agreement...
. He was the only Negrense who had this honor and consequently became a member of the Katipunan.

Aniceto first married Rosario Araneta, a direct descendant of the Kabungsuan royal family of Mindanao
Mindanao
Mindanao is the second largest and easternmost island in the Philippines. It is also the name of one of the three island groups in the country, which consists of the island of Mindanao and smaller surrounding islands. The other two are Luzon and the Visayas. The island of Mindanao is called The...
, daughter of Patricio Cabunsol Araneta and Leoncia Araneta, with whom he sired eleven children. They were:

With his second wife, Magdalena Torres, he had 10 children. They were:

When his father became bedridden, he took charge of all the work in the haciendas
Hacienda
Hacienda is a Spanish word for an estate. Some haciendas were plantations, mines, or even business factories. Many haciendas combined these productive activities...
and did much to improve the properties. As a result, through his efforts his father became one of the richest men in Negros and the Philippines. When the time came to divide his father’s properties his other brothers chose the best haciendas. Aniceto, for his part, chose the uncultivated ones. Thus, he received more land from his father than his brothers. Through hard work, he improved all the land and turned it into one of the best producing haciendas in Negros.

In the later 19th century, a Swiss
Switzerland
Switzerland name of one of the Swiss cantons. ; ; ; or ), in its full name the Swiss Confederation , is a federal republic consisting of 26 cantons, with Bern as the seat of the federal authorities. The country is situated in Western Europe,Or Central Europe depending on the definition....
businessman by the name of Luchinger decided to sell his vast properties in Matabang, Talisay, which he earlier purchased from Nicholas Loney, the biggest sugar cane producer in Negros at that time. It was offered to Aniceto Lacson, but he did not have enough ready cash. Luchinger was willing to sell it on installment provided Aniceto’s father Lucio refused as the venture appeared risky. Aniceto negotiated with Luchinger to agree to sell it to him without guarantor. Knowing that Aniceto was hardworking, honest and followed through with his business commitments, Luchinger agreed.

His home in Talisay City, Negros Occidental is owned by his descendants the Claparols family.


The Republic of Negros

The Cantonal Republic of Negros was established with Aniceto Lacson as its president. This republic lasted only from November 27, 1898 until March 4, 1899 when the negrenses and revolutionaries surrendered to the American General, James Francis Smith
James Francis Smith
James Francis Smith was an American Brigadier General, associate justice to the Supreme Court of the Philippines, Governor-General of the Philippines, and associate judge of the U.S. Court of Customs Appeals until his death....
. This government lasted only for three months and four days.