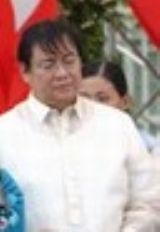 On 2003, he was accused by Senator Panfilo Lacson
Panfilo Lacson
Panfilo "Ping" Morena Lacson, Sr. is a Filipino politician. He was Director-General of the Philippine National Police from 1999 to 2001 and has been a member of the Philippine Senate since 2001.-Early life and education:...
of money laundering to a secret bank account under the fictitious name of Jose Pidal, which was later on claimed by his brother Ignacio Arroyo, Jr.

He traces his roots from Ignacio Arroyo and Doña Maria Pidal, who had 3 children namely: candidate for sainthood, Maria Beatriz Del Rosario Arroyo
Maria Beatriz Del Rosario Arroyo
Maria Beatriz del Rosario Arroyo was a Filipino nun and the founder of the Dominican Sisters of the Most Holy Rosary of the Philippines.-Early life, education and religious career:...
, Jose Maria Arroyo and Mariano Arroyo. Jose became a senator in 1919 while Mariano
Mariano
Mariano is a masculine name from the Romance languages, corresponding to the feminine Mariana.It is an Italian and Spanish variant of the Roman Marianus which derived from Marius, and Marius derived from the Roman god Mars or from the Latin maris "male" .Mariano and Marian are sometimes seen as a...
was governor of Iloilo in 1928. Senator Jose Ma. Arroyo and spouse Jesusa Araneta
Araneta family
The Aranetas are influential Filipino family that originated from Gipuzkoa, the Basque region of northern Spain. The name is derived from the Basque word "aran" meaning valley, with the suffix "eta" denoting a "place of" .-Origins:...
-Lacson from Negros Occidental
Negros Occidental
Negros Occidental is a province of the Philippines located in the Western Visayas region. Its capital is Bacolod City and it occupies the northwestern half of Negros Island; Negros Oriental is at the southeastern half...
had 7 children, one of whom was Ignacio Lacson Arroyo who married Lourdes Zaragoza Tuason. The two are the parents of Jose Miguel "Mike" Arroyo, as well as Ignacio Arroyo, Jr.
Iggy Arroyo
Ignacio Tuason Arroyo, Jr., also known as Iggy Arroyo, is a Filipino politician. He is a member of the Philippine House of Representatives representing the Fifth District of Negros Occidental. He is the brother of former First Gentleman, Jose Miguel Arroyo. He was born to Ignacio L. Arroyo and...
.

His family hails from the province of Iloilo
Iloilo
Iloilo is a province of the Philippines located in the Western Visayas region. Iloilo occupies the southeast portion of Panay Island and is bordered by Antique Province to the west and Capiz Province and the Jintotolo Channel to the north. Just off Iloilo's southeast coast is Guimaras Province,...
, with ancestry from Fujian province, his brother Ignacio "Iggy" Arroyo, Jr.
Iggy Arroyo
Ignacio Tuason Arroyo, Jr., also known as Iggy Arroyo, is a Filipino politician. He is a member of the Philippine House of Representatives representing the Fifth District of Negros Occidental. He is the brother of former First Gentleman, Jose Miguel Arroyo. He was born to Ignacio L. Arroyo and...
serves as the Representative of the Fifth district of Negros Occidental  for the Philippine Congress His major project as spouse of the President was the funding of the training of Philippine athletes for the 2005 Southeast Asian Games
2005 Southeast Asian Games
The 23rd Southeast Asian Games were held in the Philippines from November 27 to December 5 in 2005. The games were participated by the eleven nations of Southeast Asia. This was the first time that the opening and closing ceremonies were held in a large open field, despite the fact that Manila...
held in the Philippines. An attorney by profession, he became the main target of attacks both against his wife's administration and his own involvement in a multiplicity of alleged scandals by the political opposition that once led to his voluntary exile.

His only daughter Evangelina Lourdes 'Luli' Arroyo, 37, married J. Aloysius 'Luigi' Bernas at 5 pm on November 5, 2008, in Tagaytay Highlands. Bernas is a former investment banker and ex-director of Ayala Foundation. The wedding was a private affair, and only ten people were invited.

Twenty-two days after undergoing the critical open heart surgery, Atty. Arroyo was able to walk out of the hospital almost fully recovered.