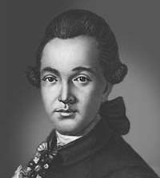 Encyclopedia
Matvey Fyodorovich Kazakov ' onMouseout='HidePop("88377")' href="/topics/Moscow">Moscow
Moscow
Moscow is the capital, the most populous city, and the most populous federal subject of Russia. The city is a major political, economic, cultural, scientific, religious, financial, educational, and transportation centre of Russia and the continent...
– 1812 Ryazan
Ryazan
Ryazan is a city and the administrative center of Ryazan Oblast, Russia. It is located on the Oka River southeast of Moscow. Population: The strategic bomber base Dyagilevo is just west of the city, and the air base of Alexandrovo is to the southeast as is the Ryazan Turlatovo Airport...
) was a Russia
Russia
Russia or , officially known as both Russia and the Russian Federation , is a country in northern Eurasia. It is a federal semi-presidential republic, comprising 83 federal subjects...
n Neoclassical
Neoclassicism
Neoclassicism is the name given to Western movements in the decorative and visual arts, literature, theatre, music, and architecture that draw inspiration from the "classical" art and culture of Ancient Greece or Ancient Rome...
architect. Kazakov was one of the most influential Muscovite architects during the reign of Catherine II
Catherine II of Russia
Catherine II, also known as Catherine the Great , Empress of Russia, was born in Stettin, Pomerania, Prussia on as Sophie Friederike Auguste von Anhalt-Zerbst-Dornburg...
, completing numerous private residences, two royal palaces, two hospitals, Moscow University
Moscow State University
Lomonosov Moscow State University , previously known as Lomonosov University or MSU , is the largest university in Russia. Founded in 1755, it also claims to be one of the oldest university in Russia and to have the tallest educational building in the world. Its current rector is Viktor Sadovnichiy...
, and the Kremlin Senate
Kremlin Senate
The Kremlin Senate is a building within the grounds of the Moscow Kremlin in Russia. Initially constructed from 1776-1787, it originally housed the Moscow branch of the Governing Senate, the highest judiciary and legislative office of Imperial Russia. Currently, it houses the Russian presidential...
. Most of his works were destroyed by the Fire of 1812
Fire of Moscow (1812)
The 1812 Fire of Moscow broke out on September 14, 1812 in Moscow on the day when Russian troops and most residents abandoned the city and Napoleon's vanguard troops entered the city following the Battle of Borodino...
; they were later rebuilt with various degrees of alteration.

Kazakov was born in Moscow. His father was a government clerk and a former serf who earned his freedom by serving in the Navy. When Kazakov was twelve years old, he joined the architectural school of Dmitry Ukhtomsky
Dmitry Ukhtomsky
Prince Dmitry Vasilyevich Ukhtomsky, Дмитрий Васильевич Ухтомский was the chief architect of Moscow, Russia during the reign of Empress Elizabeth.-Biography:...
, where he worked and studied until 1760. After a devastating fire in Tver
Tver
Tver is a city and the administrative center of Tver Oblast, Russia. Population: 403,726 ; 408,903 ;...
in 1761, Kazakov was assigned to rebuild Tver as a junior architect under P.R. Nikitin, and dedicated seven years to this project. The Travel, or Transit, Palace was completed by Kazakov in 1767.

Kazakov stepped out of Bazhenov’s shadow, receiving his first personal royal commission to design a temporary Prechistenka palace for Catherine II
Catherine II of Russia
Catherine II, also known as Catherine the Great , Empress of Russia, was born in Stettin, Pomerania, Prussia on as Sophie Friederike Auguste von Anhalt-Zerbst-Dornburg...
. This job brought him a Crown Architect’s license (1775) and a steady flow of private orders. In 1775, Kazakov and Bazhenov worked together again on temporary royal pavilions for the celebration of peace with Turkey. These Gothic
Gothic Revival architecture
The Gothic Revival is an architectural movement that began in the 1740s in England...
structures inspired Catherine II to award the architects two independent commissions in Gothic style—Tsaritsyno Palace to Bazhenov and Petrovsky Palace to Kazakov.

Numerous private houses built by Kazakov shaped the city before 1812. These were very simple classicist structures consisting of a symmetrical rectangular core with portico and very modest exterior decoration. "Kazakov's Moscow" disappeared in the fire of 1812; the few surviving houses were later altered, rebuilt, or torn down.

Kazakov's legacy remains in public buildings, country palaces and churches. Kazakov's major works, unlike Bazhenov's and the private houses of his own design, are almost invariably centered around Kazakov's trademark rotunda
Rotunda (architecture)
A rotunda is any building with a circular ground plan, sometimes covered by a dome. It can also refer to a round room within a building . The Pantheon in Rome is a famous rotunda. A Band Rotunda is a circular bandstand, usually with a dome...
halls. 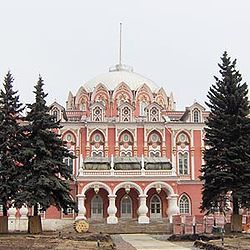 Petrovsky Palace or Castle (Петровский подъездной дворец, "St.Peter's Arrival Palace") was begun in 1776 and officially completed November 3, 1780 (though it is likely that construction continued for a few years afterwards). This palace was intended to be the last overnight station of royal journeys from St. Petersburg to Moscow. Catherine visited once, in 1785; Paul I
Paul I of Russia
Paul I was the Emperor of Russia between 1796 and 1801. He also was the 72nd Prince and Grand Master of the Order of Malta .-Childhood:...
abandoned it; Napoleon burned it down. The palace was restored in the 1830s and again in 1874 with minor alterations.

The red-brick castle with white detail originally had two royal apartments on the first floor and plenty of service space on the ground floor. They all converge on a central rotunda hall. The descriptor of "Gothic
Gothic architecture
Gothic architecture is a style of architecture that flourished during the high and late medieval period. It evolved from Romanesque architecture and was succeeded by Renaissance architecture....
" is not exactly appropriate here, since Kazakov borrows heavily from Naryshkin Baroque
Naryshkin Baroque
Naryshkin Baroque, also called Moscow Baroque, or Muscovite Baroque, is the name given to a particular style of Baroque architecture and decoration which was fashionable in Moscow from the turn of the 17th into the early 18th centuries.-Style:...
and earlier Russian themes like the oversized bottle-shaped pillars by the main entrance.

The building remained a royal hotel until 1918, but also housed a variety of non-royal residents; Lermontov
Mikhail Lermontov
Mikhail Yuryevich Lermontov , a Russian Romantic writer, poet and painter, sometimes called "the poet of the Caucasus", became the most important Russian poet after Alexander Pushkin's death in 1837. Lermontov is considered the supreme poet of Russian literature alongside Pushkin and the greatest...
used to stay in the castle at his friends' apartment. Starting in 1920, the palace housed Zhukovsky Air Force Academy, which vacated the site in the 1990s. As of today, the palace is closed, expecting a massive reconstruction or restoration. City Hall plans to convert it either to a unique luxury hotel or another President
President of the Russian Federation
The President of the Russian Federation is the head of state, supreme commander-in-chief and holder of the highest office within the Russian Federation...
's lodge, which may destroy whatever is left by the military. These plans are not yet authorized. 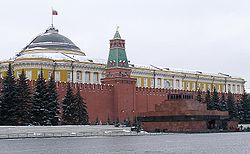 The Kremlin Senate project was started in 1776 by Karl Blank
Karl Blank
Karl Blank was a Russian architect, notable as one of the last practitioners of Baroque architecture and the first Moscow architect to build early neoclassical buildings. His surviving, undisputed legacy consists of three baroque churches and Moscow Orphanage...
on a large triangular property in the northern corner of the Kremlin, following a 1775 draft by Kazakov. Blank was demoted in 1779, and Kazakov took the lead. He envisaged the Governing Senate
Governing Senate
The Governing Senate was a legislative, judicial, and executive body of Russian Monarchs, instituted by Peter the Great to replace the Boyar Duma and lasted until the very end of the Russian Empire. It was chaired by the Ober-Procurator...
as the Temple of Law. The triangular structure is centered around the Rotunda Hall, which has a diameter of 24.6 meters. Its dome originally carried a St. George statue, then a statue of Justice which was destroyed by French troops in 1812. Later, the state flag flew from the dome, as seen from Red Square, and the dome became a Soviet propaganda icon.

In the 1990s, the Senate was converted to house Russian presidential administration. An indiscriminate reconstruction destroyed Kazakov's interiors. Preservation advocate Alexei Komech
Alexei Komech
Alexei Komech , preservationist, architectural historian and critic in Russia who helped to protect the cultural heritage of Moscow and Saint Petersburg for over 50 years. He was the Director of the Moscow Art History Institute and a member of the Moscow's City Government's Architectural...
reported from the site, "crushed walls, ripped air ducts and piles of 200 year old bricks remind me of wandering around ruins of Berlin
Berlin
Berlin is the capital city of Germany and is one of the 16 states of Germany. With a population of 3.45 million people, Berlin is Germany's largest city. It is the second most populous city proper and the seventh most populous urban area in the European Union...
in 1946".

Assembly of the Nobility (Благородное собрание, later dubbed "House of Unions", Дом Союзов) was built as a clubhouse between 1784 and 1790. Despite numerous exterior alterations (the last from 1903–1908), the Pillar Hall (Колонный зал, 1784–1787) inside is very close to Kazakov's original. The hall is named after 28 internal Corinthian
Indo-Corinthian capital
Indo-Corinthian capitals are capitals crowning columns or pilasters, which can be found in the northwestern Indian subcontinent, and usually combine Hellenistic and Indian elements...
columns, all wood with white faux marble finish. It has arguably the best acoustics in Moscow and has always been a prime stage for classical music. In the Soviet era, it housed party congresses and Lenin's and Stalin's funeral services.

Golitsyn Hospital (Голицынская больница) was built with a 900,000 rouble private endowment of the late Prince Dmitry Golitsyn
Golitsyn
-People:*Golitsyns noble family *Nicholas Galitzine, last Tsarist prime minister of Russia*Anatoliy Golitsyn, Soviet KGB defector*Georgy Golitsyn, Soviet physicist and writer on nuclear winter...
(1721–1793), on the condition that the hospital would remain free to all, regardless of wealth or creed. Kazakov was the Golitsyn family's architect. The hospital was begun on July 21, 1796; this time, Bazhenov assisted Kazakov as site manager. With support from the dowager Empress Maria Feodorovna, the first stage was completed by July 22, 1802. In 1812, the 130-bed hospital was spared by fire. It housed the wounded of both French and Russian armies. Later, the First and Second City Hospitals were built nearby. In 1918, all three hospitals were merged together and are known today as "First City" (Первая Градская). The central core of the hospital remains very close to Kazakov's original.

Pavlovskaya Hospital (Павловская больница, now "Fourth City Hospital") is the only work of Kazakov's that has remained unaltered over two centuries. Established in 1763, it was the oldest public hospital in Moscow. In 1802, Kazakov started to rebuild the main building in the strict Neoclassicist style; side buildings were added by Giliardi in the 1820s. In the process of construction, Kazakov was indicted for fraud; he was spared from criminal persecution but lost his license, which barred him from state-funded projects.

In 1806, the ailing Kazakov finally retired from practice. After the Battle of Borodino
Battle of Borodino
The Battle of Borodino , fought on September 7, 1812, was the largest and bloodiest single-day action of the French invasion of Russia and all Napoleonic Wars, involving more than 250,000 troops and resulting in at least 70,000 casualties...
, Kazakov's children evacuated him to Ryazan. The city burned down in September 1812. Relatives tried to shield him from the news about the fire of Moscow, but eventually the news reached him. Kazakov died October 26, 1812 and was buried in Ryazan's Trinity Monastery.

Kazakov had three sons, all trained in architecture. Pavel and Vasily died young; Matvey survived his father and died at age 39.

Kazakov's most successful students and assistants were Joseph Bové
Joseph Bové
Joseph Bové was a Russian neoclassical architect with Italian roots who supervised reconstruction of Moscow after the Fire of 1812.-Biography:...
, Ivan Yegotov (1756–1814), Fedor Sokolov (1752–1824), and Alexei Bakarev (1762–1817).