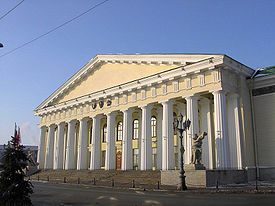 The G. V. Plekhanov Saint Petersburg State Mining Institute and Technical University is Russia
Russia
Russia or , officially known as both Russia and the Russian Federation , is a country in northern Eurasia. It is a federal semi-presidential republic, comprising 83 federal subjects...
's oldest higher education institute devoted to engineering. Located in Saint Petersburg
Saint Petersburg
Saint Petersburg is a city and a federal subject of Russia located on the Neva River at the head of the Gulf of Finland on the Baltic Sea...
, the institute is one of the oldest mining schools in Europe, and home to one of the world's finest and most exclusive collections of minerals, gem samples and mining equipment miniatures used for teaching purposes.

The institute is housed in an Empire style building on the 21st line and the Neva River embankment on the south shore of Vasilievsky Island
Vasilievsky Island
Vasilyevsky Island is an island in Saint Petersburg, Russia, bordered by the rivers Bolshaya Neva and Malaya Neva in the south and northeast, and by the Gulf of Finland in the west. Vasilyevsky Island is separated from Dekabristov Island by the Smolenka River...
. It was built in 1806-1811 to a design by the serf-architect Andrey Voronikhin
Andrey Voronikhin
Andrey Nikiforovich Voronikhin was a Russian architect and painter. As a representative of classicism he was also one of the founders of the monumental Russian Empire style...
, who also designed the Kazan Cathedral on Nevsky Prospekt and buildings on Paul I's estate at Pavlovsk
Pavlovsk Palace
Pavlovsk Palace is an 18th-century Russian Imperial residence built by Paul I of Russia near Saint Petersburg. After his death, it became the home of his widow, Maria Feodorovna...
south of the city. The statues flanking the entrance were sculpted by Stepan Pimenov; the reliefs were done by Vasily Demuth-Malinovsky. The Column Hall and the Caryatid Hall were decorated by Michael Scotti.