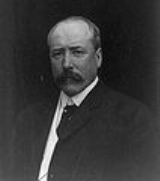 Encyclopedia
Alton Brooks Parker was an American
United States
The United States of America is a federal constitutional republic comprising fifty states and a federal district...
lawyer
Lawyer
A lawyer, according to Black's Law Dictionary, is "a person learned in the law; as an attorney, counsel or solicitor; a person who is practicing law." Law is the system of rules of conduct established by the sovereign government of a society to correct wrongs, maintain the stability of political...
, judge
Judge
A judge is a person who presides over court proceedings, either alone or as part of a panel of judges. The powers, functions, method of appointment, discipline, and training of judges vary widely across different jurisdictions. The judge is supposed to conduct the trial impartially and in an open...
and the Democratic nominee for U.S. president
President of the United States
The President of the United States of America is the head of state and head of government of the United States. The president leads the executive branch of the federal government and is the commander-in-chief of the United States Armed Forces....
in the 1904 elections.

Parker was born in Cortland, New York
Cortland, New York
Cortland is a city in Cortland County, New York, USA. As of the 2000 census, the city had a population of 18,740. It is the county seat of Cortland County.The City of Cortland, near the west border of the county, is surrounded by the Town of Cortlandville....
. He graduated LL.B. from Albany Law School
Albany Law School
Albany Law School is an ABA accredited law school based in Albany, New York. It was founded in 1851 by Amos Dean , Amasa Parker, Ira Harris and others....
and practiced law in Kingston, New York
Kingston, New York
Kingston is a city in and the county seat of Ulster County, New York, USA. It is north of New York City and south of Albany. It became New York's first capital in 1777, and was burned by the British Oct. 16, 1777, after the Battles of Saratoga...
. He was a justice of the New York Supreme Court
New York Supreme Court
The Supreme Court of the State of New York is the trial-level court of general jurisdiction in thestate court system of New York, United States. There is a supreme court in each of New York State's 62 counties, although some smaller counties share judges with neighboring counties...
from 1885 to 1897, and Chief Judge of the New York Court of Appeals
New York Court of Appeals
The New York Court of Appeals is the highest court in the U.S. state of New York. The Court of Appeals consists of seven judges: the Chief Judge and six associate judges who are appointed by the Governor to 14-year terms...
from 1898 to 1904. Parker was a protege of conservative Democratic politician David B. Hill
David B. Hill
David Bennett Hill was an American politician from New York who was the 29th Governor of New York from 1885 to 1891.-Life:...
. He married Mary L. Schoonmaker on October 16, 1872. 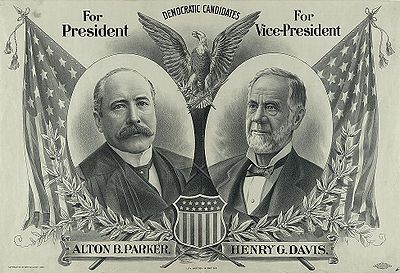 Parker resigned from the bench after receiving the 1904 Democratic Party
Democratic Party (United States)
The Democratic Party is one of two major contemporary political parties in the United States, along with the Republican Party. The party's socially liberal and progressive platform is largely considered center-left in the U.S. political spectrum. The party has the lengthiest record of continuous...
nomination for the U.S. presidency. He chose former U.S. Senator from West Virginia, Henry G. Davis
Henry G. Davis
Henry Gassaway Davis was a self-made millionaire and U.S. Senator from West Virginia. He was the Democratic Party's nominee for Vice President of the United States in 1904. His brother was U.S...
to be his running mate for the office of Vice President of the United States. Parker was supported by conservative Bourbon Democrats, like former President Grover Cleveland
Grover Cleveland
Stephen Grover Cleveland was the 22nd and 24th president of the United States. Cleveland is the only president to serve two non-consecutive terms and therefore is the only individual to be counted twice in the numbering of the presidents...
, who had been alienated from the party in 1896 and 1900 due to the radicalism of the party's nominee William Jennings Bryan
William Jennings Bryan
William Jennings Bryan was an American politician in the late-19th and early-20th centuries. He was a dominant force in the liberal wing of the Democratic Party, standing three times as its candidate for President of the United States...
on economic issues. It was hoped that Parker could be acceptable to both factions since he was "sound" on economic issues, but had supported Bryan in 1896 as a good party man. These hopes were frustrated, however, as Parker had little appeal to Bryanites and carried only the Solid South
Solid South
Solid South is the electoral support of the Southern United States for the Democratic Party candidates for nearly a century from 1877, the end of Reconstruction, to 1964, during the middle of the Civil Rights era....
. Division within his party over currency
Currency
In economics, currency refers to a generally accepted medium of exchange. These are usually the coins and banknotes of a particular government, which comprise the physical aspects of a nation's money supply...
issues and the popularity of incumbent Theodore Roosevelt
Theodore Roosevelt
Theodore "Teddy" Roosevelt was the 26th President of the United States . He is noted for his exuberant personality, range of interests and achievements, and his leadership of the Progressive Movement, as well as his "cowboy" persona and robust masculinity...
led to Parker's landslide defeat, the electoral vote being 336 for Roosevelt to 140 for Parker, the popular vote 7,623,486 for Roosevelt to 5,077,971 for Parker. Afterwards he resumed his practice of law.

Parker later served as a temporary chairman and keynote speaker at the 1912 Democratic National Convention
1912 Democratic National Convention
The 1912 Democratic National Convention was held at the Fifth Regiment Armory in Baltimore from June 25 to July 2, 1912. It proved to be one of the more memorable United States presidential conventions of the twentieth century. The main candidates were House Speaker Champ Clark of Missouri and...
, which nominated Woodrow Wilson
Woodrow Wilson
Thomas Woodrow Wilson was the 28th President of the United States, from 1913 to 1921. A leader of the Progressive Movement, he served as President of Princeton University from 1902 to 1910, and then as the Governor of New Jersey from 1911 to 1913...
for President. In 1913, he was counsel for the managers of the trial leading to the impeachment of Governor William Sulzer
William Sulzer
William Sulzer was an American lawyer and politician, nicknamed Plain Bill Sulzer. He was the 39th Governor of New York and a long-serving congressman from the same state. He was the first and so far only New York Governor to be impeached...
of New York.

He died from a heart attack while riding in his car through Central Park
Central Park
Central Park is a public park in the center of Manhattan in New York City, United States. The park initially opened in 1857, on of city-owned land. In 1858, Frederick Law Olmsted and Calvert Vaux won a design competition to improve and expand the park with a plan they entitled the Greensward Plan...
in New York City
New York City
New York is the most populous city in the United States and the center of the New York Metropolitan Area, one of the most populous metropolitan areas in the world. New York exerts a significant impact upon global commerce, finance, media, art, fashion, research, technology, education, and...
. He was buried in Wiltwyck Cemetery, Kingston, NY.

In Irving Stone
Irving Stone
Irving Stone was an American writer known for his biographical novels of famous historical personalities, including Lust for Life, a biographical novel about the life of Vincent van Gogh, and The Agony and the Ecstasy, a biographical novel about Michelangelo.-Biography:In...
's 1943 book They Also Ran
They Also Ran
They Also Ran is the title of a 1943 book by Irving Stone. Stone, a historian, evaluates several unsuccessful candidates for President of the United States in light of their places in history , and attempts to assess whether or not the American people made the "right" choice in rejecting them for...
about defeated presidential candidates, the author stated that Parker was the only defeated presidential candidate in history never to have a biography written about him. Stone theorized that Parker would have been an effective president and the 1904 election was one of a few in American history in which voters had two first-rate candidates to choose from. Stone professed that Americans liked Roosevelt more because of his colorful style.

The New York State Office of Parks, Recreation and Historic Preservation has a portrait of Judge Parker by the Swiss-born American artist Adolfo Muller-Ury
Adolfo Müller-Ury
Adolfo Muller-Ury was a Swiss-born American portrait painter and impressionistic painter of roses and still life.-Heritage and early life in Switzerland:...
(1862–1947) painted in 1904 and donated by Parker's wife in 1926 hanging at the Senate House State Historic Site at Kingston, New York. This was a reduced version of a three-quarter length portrait painted in Esopus at Parker's House and sent, as soon as it was completed, to the Hoffman House at Broadway and 25 Street in Manhattan, which was at that time the informal headquarters for the Democratic party (this is today unlocated).