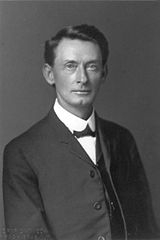 As a state legislator, Watson struggled unsuccessfully to curb the abuses of the powerful railroad corporations. A bill subjecting railroads to county property taxes was voted down after U.S. Senator Joseph E. Brown
Joseph E. Brown
Joseph Emerson Brown , often referred to as Joe Brown, was the 42nd Governor of Georgia from 1857 to 1865, and a U.S. Senator from 1880 to 1891...
offered to provide the legislators with round-trip train fares to the Louisville Exposition
Southern Exposition
The Southern Exposition was a five-year series of World's Fairs held in the city of Louisville, Kentucky from 1883 to 1887 in what is now Louisville's Old Louisville neighborhood. The exposition, held for 100 days each year on immediately south of Central Park, which is now the St....
of 1883. In disgust, Watson resigned his seat and returned to the practice of law before his term expired. He was a presidential elector for the Democratic ticket of Grover Cleveland
Grover Cleveland
Stephen Grover Cleveland was the 22nd and 24th president of the United States. Cleveland is the only president to serve two non-consecutive terms and therefore is the only individual to be counted twice in the numbering of the presidents...
and Allen G. Thurman
Allen G. Thurman
Allen Granberry Thurman was a Democratic Representative and Senator from Ohio, as well as the nominee of the Democratic Party for Vice President of the United States in 1888.-Biography:...
in the 1888 election
United States presidential election, 1888
The 1888 election for President of the United States saw Grover Cleveland of New York, the incumbent president and a Democrat, try to secure a second term against the Republican nominee Benjamin Harrison, a former U.S. Senator from Indiana...
.

The People's Party advocated the public ownership of the railroads, steamship lines and telephone and telegraph systems. It also supported the free and unlimited coinage of silver, the abolition of national banks, a system of graduated income tax and the direct election of United States Senator
United States Senate
The United States Senate is the upper house of the bicameral legislature of the United States, and together with the United States House of Representatives comprises the United States Congress. The composition and powers of the Senate are established in Article One of the U.S. Constitution. Each...
s. As a Populist, Watson tried to unite the agrarians across class lines, overcoming racial divides. He also supported the right of African American men to vote. Unfortunately, the failures of the Populists' attempt to make political progress through fusion tickets with the Democrats in 1896 and 1898 deeply affected Watson.

Watson served in the House of Representatives from 1891 until March 1893. After being defeated he returned to work as a lawyer in Thomson, Georgia. He also served as editor and business manager of the People's Party Paper, published in Atlanta.

The masthead of Watson's newspaper in 1894 declared that it "is now and will ever be a fearless advocate of the Jeffersonian
Thomas Jefferson
Thomas Jefferson was the principal author of the United States Declaration of Independence and the Statute of Virginia for Religious Freedom , the third President of the United States and founder of the University of Virginia...
Theory of Popular Government, and will oppose to the bitter end the Hamiltonian
Alexander Hamilton
Alexander Hamilton was a Founding Father, soldier, economist, political philosopher, one of America's first constitutional lawyers and the first United States Secretary of the Treasury...
Doctrines of Class Rule, Moneyed Aristocracy, National Banks, High Tariffs, Standing Armies and formidable Navies — all of which go together as a system of oppressing the people."

This created a split in the Populist Party. Some refused to support Bryan, whereas others, such as Mary Lease
Mary Elizabeth Lease
Mary Elizabeth Lease was an American lecturer, writer, and political activist. She was an advocate of the suffrage movement as well as temperance but she was best known for her work with the Populist party. She was born to Irish immigrants Joseph P. and Mary Elizabeth Clyens, in Ridgway,...
, reluctantly campaigned for him. Watson's name remained on the ballot as Bryan's vice presidential nominee on the Populist Party ticket, while Sewall was listed as Bryan's Democratic Party vice presidential nominee. Watson received 217,000 votes for Vice President, less than a quarter of the number of votes received by the 1892 Populist ticket. However, Watson received more votes than any national Populist candidate from this time on.

Bryan's defeat damaged the Populist Party. While Populists held some offices in western states for several years, the party ceased to be a factor in Georgia politics.

As his own personal wealth grew, Watson denounced socialism
Socialism
Socialism is an economic system characterized by social ownership of the means of production and cooperative management of the economy; or a political philosophy advocating such a system. "Social ownership" may refer to any one of, or a combination of, the following: cooperative enterprises,...
, which had drawn many converts from the ashes of Populism. He became a vigorous antisemite and anti-Catholic crusader, and advocated reorganizing the Ku Klux Klan
Ku Klux Klan
Ku Klux Klan, often abbreviated KKK and informally known as the Klan, is the name of three distinct past and present far-right organizations in the United States, which have advocated extremist reactionary currents such as white supremacy, white nationalism, and anti-immigration, historically...
.

Watson was nominated as the Populist Party's candidate in 1904 and received 117,183 votes. This was double the Populist's showing in 1900, but less than one-eighth of the party's support from just 12 years earlier.

The Populist Party's fortunes declined in the 1908 presidential campaign, and Watson as the party's standard bearer attracted just 29,100 votes. While Watson never received more than 1% of the nationwide vote, he had respectable showings in selected Western and Southern states. In the 1904 and 1908 campaigns, Watson received 18% and 12% respectively in his home state of Georgia.

Through his publications Watson's Magazine and The Jeffersonian, Watson continued to have great influence on public opinion, especially in his native Georgia.

In 1913 Watson played a prominent role through his newspaper in inflaming public opinion in the case of Leo Frank
Leo Frank
Leo Max Frank was a Jewish-American factory superintendent whose hanging in 1915 by a lynch mob of prominent citizens in Marietta, Georgia drew attention to antisemitism in the United States....
, a Jewish American factory manager who was accused of the murder of Mary Phagan, a 13-year-old factory worker. Frank was convicted of murder on August 25, 1913 after a month-long trial and sentenced to death by hanging by Judge Roan. At the eleventh hour, on June 21, 1915, departing Governor of Georgia John M. Slaton
John M. Slaton
John Marshall Slaton, or Jack Slaton, served two non-consecutive terms as the 60th Governor of Georgia.Slaton was born in Meriwether County, Georgia....
commuted the sentence of Frank to life in prison. The clemency decision followed a lengthy failed appeals process over a two-year period. On August 16, 1915 at 11 PM, Frank was abducted from his prison cell by a group of prominent men and lynched in the early hours of August 17, 1915, an act which Watson had both called for and later celebrated on the pages of The Jeffersonian.

Watson rejoined the Democratic Party, and was elected to the U.S. Senate in 1920. He died of a cerebral hemorrhage
Stroke
A stroke, previously known medically as a cerebrovascular accident , is the rapidly developing loss of brain function due to disturbance in the blood supply to the brain. This can be due to ischemia caused by blockage , or a hemorrhage...
in 1922 at age 66. Rebecca L. Felton was appointed to replace him and served (for 24 hours) as the first female U.S. Senator.