Alejandro Selkirk Island, previously known as Isla Más Afuera and renamed after Alexander Selkirk
Alexander Selkirk
Alexander Selkirk was a Scottish sailor who spent four years as a castaway when he was marooned on an uninhabited island. It is probable that his travels provided the inspiration for Daniel Defoe's novel Robinson Crusoe....
, is the second largest and most westernly island of the Juan Fernández Islands
Juan Fernández Islands
The Juan Fernández Islands are a sparsely inhabited island group reliant on tourism and fishing in the South Pacific Ocean, situated about off the coast of Chile, and is composed of three main volcanic islands; Robinson Crusoe Island, Alejandro Selkirk Island and Santa Clara Island, the first...
archipelago
Archipelago
An archipelago , sometimes called an island group, is a chain or cluster of islands. The word archipelago is derived from the Greek ἄρχι- – arkhi- and πέλαγος – pélagos through the Italian arcipelago...
of the Valparaíso Region
Valparaíso Region
The V Valparaíso Region is one of Chile's 15 first order administrative divisions.Valparaíso Region, 2006 With the country's third highest population of 1,539,852 million in 2002 and third smallest area of , the region is Chile's second most densely populated after the Santiago Metropolitan Region...
of Chile
Chile
Chile ,officially the Republic of Chile , is a country in South America occupying a long, narrow coastal strip between the Andes mountains to the east and the Pacific Ocean to the west. It borders Peru to the north, Bolivia to the northeast, Argentina to the east, and the Drake Passage in the far...
. It is situated 181 kilometres (112 mi) west of Robinson Crusoe Island
Robinson Crusoe Island
Robinson Crusoe Island , formerly known as Más a Tierra , or Aguas Buenas, is the largest island of the Chilean Juan Fernández archipelago, situated 674 kilometres west of South America in the South Pacific Ocean...
in the southeastern Pacific Ocean
Pacific Ocean
The Pacific Ocean is the largest of the Earth's oceanic divisions. It extends from the Arctic in the north to the Southern Ocean in the south, bounded by Asia and Australia in the west, and the Americas in the east.At 165.2 million square kilometres in area, this largest division of the World...
.

In 1966, the Chile
Chile
Chile ,officially the Republic of Chile , is a country in South America occupying a long, narrow coastal strip between the Andes mountains to the east and the Pacific Ocean to the west. It borders Peru to the north, Bolivia to the northeast, Argentina to the east, and the Drake Passage in the far...
an government renamed Isla Más Afuera to 'Alejandro Selkirk Island,' with Isla Más a Tierra becoming 'Robinson Crusoe Island.' Alexander Selkirk
Alexander Selkirk
Alexander Selkirk was a Scottish sailor who spent four years as a castaway when he was marooned on an uninhabited island. It is probable that his travels provided the inspiration for Daniel Defoe's novel Robinson Crusoe....
was a Scottish
Scotland
Scotland is a country that is part of the United Kingdom. Occupying the northern third of the island of Great Britain, it shares a border with England to the south and is bounded by the North Sea to the east, the Atlantic Ocean to the north and west, and the North Channel and Irish Sea to the...
sailor who was marooned as a castaway
Castaway
A castaway is a person who is cast adrift or ashore. While the situation usually happens after a shipwreck, some people voluntarily stay behind on a deserted island, either to evade their captors or the world in general. Alternatively, a person or item can be cast away, meaning rejected or discarded...
on Isla Más a Tierra (then uninhabited) from 1704 to 1709. His story of survival inspired the 1719 novel Robinson Crusoe
Robinson Crusoe
Robinson Crusoe is a novel by Daniel Defoe that was first published in 1719. Epistolary, confessional, and didactic in form, the book is a fictional autobiography of the title character—a castaway who spends 28 years on a remote tropical island near Trinidad, encountering cannibals, captives, and...
by Daniel Defoe
Daniel Defoe
Daniel Defoe , born Daniel Foe, was an English trader, writer, journalist, and pamphleteer, who gained fame for his novel Robinson Crusoe. Defoe is notable for being one of the earliest proponents of the novel, as he helped to popularise the form in Britain and along with others such as Richardson,...
. 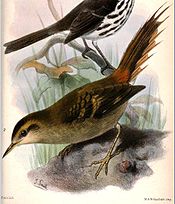 The island measures 11 kilometres (7 mi) north-south and 6 kilometres (4 mi) east-west, and has an area of 44.6 square kilometres (17 sq mi). It is densely wooded and very mountainous and is marked by ridge
Ridge
A ridge is a geological feature consisting of a chain of mountains or hills that form a continuous elevated crest for some distance. Ridges are usually termed hills or mountains as well, depending on size. There are several main types of ridges:...
s and numerous deep ravine
Ravine
A ravine is a landform narrower than a canyon and is often the product of streamcutting erosion. Ravines are typically classified as larger in scale than gullies, although smaller than valleys. A ravine is generally a fluvial slope landform of relatively steep sides, on the order of twenty to...
s lead to a steep-to, rugged coast on the east side of the island off which are tremendous depths. The coastal cliff
Cliff
In geography and geology, a cliff is a significant vertical, or near vertical, rock exposure. Cliffs are formed as erosion landforms due to the processes of erosion and weathering that produce them. Cliffs are common on coasts, in mountainous areas, escarpments and along rivers. Cliffs are usually...
s are up to 1000 m (3,281 ft) high. The south, west and north sides of the island have sandy strips of beach which extend 0.1 mi (0.160934 km) offshore in places. The highest peak, Cerro de Los Inocentes, rises to 1329 m (4,360 ft) at the of the southwest side of Alejandro Selkirk Island, and at the southwest extremity there is a prominent rock with a hole through it.

Dating of the rocks on the island show that it is the youngest of the Juan Fernández Islands at an age between 1 or 2 million years old. Due to its age, the island has had a little erosion
Erosion
Erosion is when materials are removed from the surface and changed into something else. It only works by hydraulic actions and transport of solids in the natural environment, and leads to the deposition of these materials elsewhere...
.

About 59 kilometres (37 mi) southwest of the island is submerged Sefton Reef (36°43′S 83°15′W), almost reaching sea level, and 47 kilometres (29 mi) northwest Yosemite Rock (32°04′S 83°14′W). Podesta Island
Podesta (island)
Podesta is a phantom island reported at by the Italian Captain Pinocchio of the vessel Barone Podestà in 1879 claiming it to be just over a kilometre in circumference located 1390 km due west of El Quisco, Chile. It was originally located 900 miles west of Chile's coast...
reported further west is a phantom island
Phantom island
Phantom islands are islands that were believed to exist, and appeared on maps for a period of time during recorded history, but were later removed after they were proved to be nonexistent...
.

The Juan Fernández Fur Seal
Juan Fernandez Fur Seal
The Juan Fernández Fur Seal is a fur seal that breeds on the Juan Fernández Islands off the coast of Chile. It is the second smallest of the otariid seal . Discovered by navigator Juan Fernández in the sixteenth century, the seals became a target for sealers in the Maritime Fur Trade era...
is known to have existed during the late-17th century on the island with the population of the seals on Alejandro Selkirk Island and Robinson Crusoe Island believed to be in excess of four million by the late 17th century. A census of 1797 estimated a population 2–3 million fur seals. The species was hunted to near extinction by the 19th century and was thought to be extinct for 100 years until 200 were found on the island in 1965. Since then, the population has grown at a steady rate of 15–20% every year. The Masafuera Rayadito
Masafuera Rayadito
The Masafuera Rayadito, Aphrastura masafuerae, is a rare bird endemic to Alejandro Selkirk Island in the Juan Fernández Islands. The species is a member of the ovenbird family and only one of two species in the rayadito genus...
is endemic to Alejandro Selkirk and one of the rarest South American birds with only 140 individuals left.

The flora on the island is in the Fernandezian Region
Fernandezian Region
The Fernandezian Region is a Floristic Region which includes two island groups, the Juan Fernández Islands and Desventuradas Islands archipelagoes, that lie in the South Pacific Ocean off the west coast of Chile...
Floristic Region, in the Antarctic Floristic Kingdom
Antarctic Floristic Kingdom
The Antarctic Floristic Kingdom is a floristic region first identified by botanist Ronald Good , which includes most areas of the world south of 40°S latitude...
, but often also included within the Neotropical Kingdom. Endemic plant families
Family (biology)
In biological classification, family is* a taxonomic rank. Other well-known ranks are life, domain, kingdom, phylum, class, order, genus, and species, with family fitting between order and genus. As for the other well-known ranks, there is the option of an immediately lower rank, indicated by the...
include Lactoridaceae, with endemic plant genera
Genus
In biology, a genus is a low-level taxonomic rank used in the biological classification of living and fossil organisms, which is an example of definition by genus and differentia...
also found.