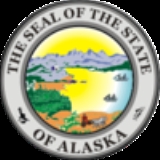 Encyclopedia
The Alaska Supreme Court is the state supreme court
State supreme court
In the United States, the state supreme court is the highest state court in the state court system ....
in the State
U.S. state
A U.S. state is any one of the 50 federated states of the United States of America that share sovereignty with the federal government. Because of this shared sovereignty, an American is a citizen both of the federal entity and of his or her state of domicile. Four states use the official title of...
of Alaska
Alaska
Alaska is the largest state in the United States by area. It is situated in the northwest extremity of the North American continent, with Canada to the east, the Arctic Ocean to the north, and the Pacific Ocean to the west and south, with Russia further west across the Bering Strait...
's judicial department
Judiciary
The judiciary is the system of courts that interprets and applies the law in the name of the state. The judiciary also provides a mechanism for the resolution of disputes...
(Alaska Court System
Alaska Court System
The Alaska Court System is the unified, centrally administered, and totally state-funded judicial system for the State of Alaska. It has four levels of state courts: the Alaska Supreme Court, the Alaska Court of Appeals, the Alaska Superior Court, and the Alaska District Court...
). The supreme court
Court
A court is a form of tribunal, often a governmental institution, with the authority to adjudicate legal disputes between parties and carry out the administration of justice in civil, criminal, and administrative matters in accordance with the rule of law...
is composed of the chief justice
Chief Justice
The Chief Justice in many countries is the name for the presiding member of a Supreme Court in Commonwealth or other countries with an Anglo-Saxon justice system based on English common law, such as the Supreme Court of Canada, the Constitutional Court of South Africa, the Court of Final Appeal of...
and four associate justices
Judge
A judge is a person who presides over court proceedings, either alone or as part of a panel of judges. The powers, functions, method of appointment, discipline, and training of judges vary widely across different jurisdictions. The judge is supposed to conduct the trial impartially and in an open...
, who are all appointed by the governor
Governor
A governor is a governing official, usually the executive of a non-sovereign level of government, ranking under the head of state...
of Alaska (see List of Governors of Alaska) and face judicial retention elections and who choose one of their own members to serve a three-year term as Chief Justice. The decisions of the Alaska Supreme Court are binding on all other Alaska state courts, and the only other court that may reverse or modify those decisions is the Supreme Court of the United States
Supreme Court of the United States
The Supreme Court of the United States is the highest court in the United States. It has ultimate appellate jurisdiction over all state and federal courts, and original jurisdiction over a small range of cases...
.

The supreme court hears appeals from lower state courts and also administers the state's judicial system. It hears cases on a monthly basis in Anchorage
Anchorage, Alaska
Anchorage is a unified home rule municipality in the southcentral part of the U.S. state of Alaska. It is the northernmost major city in the United States...
, approximately quarterly in Fairbanks
Fairbanks, Alaska
Fairbanks is a home rule city in and the borough seat of the Fairbanks North Star Borough in the U.S. state of Alaska.Fairbanks is the largest city in the Interior region of Alaska, and second largest in the state behind Anchorage...
and Juneau, and as needed in other Alaska communities. The court prefers to hear oral arguments in the city where the case was heard in the trial court
Trial court
A trial court or court of first instance is a court in which trials take place. Such courts are said to have original jurisdiction.- In the United States :...
.

Justices, like other Alaska state court judges, are selected in accordance with the Missouri Plan
Missouri Plan
The Missouri Plan is a method for the selection of judges. It originated in Missouri in 1940, and has been adopted by several states of the United States...
. The governor of Alaska appoints a supreme court justice from a list of qualified candidates submitted by the Alaska Judicial Council. To be eligible for appointment, a person must be a citizen of the United States
United States
The United States of America is a federal constitutional republic comprising fifty states and a federal district...
and a resident of Alaska for five years prior to appointment. A justice must be licensed to practice law in Alaska at the time of appointment and must have engaged in the active practice of law for eight years. The appointed justice must be approved by the voters on a nonpartisan ballot at the first statewide general election held more than three years after appointment; thereafter, each justice must participate in another retention election every ten years.

The supreme court has final state appellate jurisdiction
Appellate jurisdiction
Appellate jurisdiction is the power of the Supreme Court to review decisions and change outcomes of decisions of lower courts. Most appellate jurisdiction is legislatively created, and may consist of appeals by leave of the appellate court or by right...
in both civil
Civil law (common law)
Civil law, as opposed to criminal law, is the branch of law dealing with disputes between individuals or organizations, in which compensation may be awarded to the victim...
and criminal law
Criminal law
Criminal law, is the body of law that relates to crime. It might be defined as the body of rules that defines conduct that is not allowed because it is held to threaten, harm or endanger the safety and welfare of people, and that sets out the punishment to be imposed on people who do not obey...
matters. It must accept appeals from final decisions by the superior court in civil cases (including cases which originated in administrative agencies). Until the creation of the court of appeals in 1980, the supreme court was also required to accept appeals from final decisions in criminal cases; now, however, the court of appeals fills this role, although the supreme court still has jurisdiction
Jurisdiction
Jurisdiction is the practical authority granted to a formally constituted legal body or to a political leader to deal with and make pronouncements on legal matters and, by implication, to administer justice within a defined area of responsibility...
to exercise its discretion to accept appeals from decisions of the court of appeals (or upon certification from the court of appeals that the case involves a significant question of constitutional law
Constitutional law
Constitutional law is the body of law which defines the relationship of different entities within a state, namely, the executive, the legislature and the judiciary....
or an issue of substantial public interest
Public interest
The public interest refers to the "common well-being" or "general welfare." The public interest is central to policy debates, politics, democracy and the nature of government itself...
). In addition, the supreme court may, at its discretion, hear petitions from non-final decisions by lower courts or original applications in matters in which relief is not otherwise available, including admission to the bar association
Bar association
A bar association is a professional body of lawyers. Some bar associations are responsible for the regulation of the legal profession in their jurisdiction; others are professional organizations dedicated to serving their members; in many cases, they are both...
and attorney
Lawyer
A lawyer, according to Black's Law Dictionary, is "a person learned in the law; as an attorney, counsel or solicitor; a person who is practicing law." Law is the system of rules of conduct established by the sovereign government of a society to correct wrongs, maintain the stability of political...
discipline
Discipline
In its original sense, discipline is referred to systematic instruction given to disciples to train them as students in a craft or trade, or to follow a particular code of conduct or "order". Often, the phrase "to discipline" carries a negative connotation. This is because enforcement of order –...
matters, as well as questions of state law
State law
In the United States, state law is the law of each separate U.S. state, as passed by the state legislature and adjudicated by state courts. It exists in parallel, and sometimes in conflict with, United States federal law. These disputes are often resolved by the federal courts.-See also:*List of U.S...
certified from the United States federal courts
United States federal courts
The United States federal courts make up the judiciary branch of federal government of the United States organized under the United States Constitution and laws of the federal government.-Categories:...
.

The court meets after oral argument and on a bi-weekly basis to confer on cases argued orally and on cases submitted on the briefs. The court usually announces its decisions of the cases by issuing opinions for official publication (in Westlaw
Westlaw
Westlaw is one of the primary online legal research services for lawyers and legal professionals in the United States and is a part of West. In addition, it provides proprietary database services...
, the Pacific Reporter and the Alaska Reporter) as well as memorandum opinions and judgments (MO&Js) and orders summarily ruling on the merits of cases or dismissing them.
Although the MO&Js and most orders are not published, the MO&Js are available for public inspection at the Anchorage, Fairbanks, and Juneau offices of the clerk of the appellate courts, and the orders are filed in the clerk's Anchorage office. Current MO&Js are also available on the Alaska Court System website
Website
A website, also written as Web site, web site, or simply site, is a collection of related web pages containing images, videos or other digital assets. A website is hosted on at least one web server, accessible via a network such as the Internet or a private local area network through an Internet...
.

Under the Alaska Constitution, the supreme court establishes rules for the administration of all courts in the state and for practice and procedure in civil and criminal cases. The supreme court has further adopted rules for the practice of law
Practice of law
In its most general sense, the practice of law involves giving legal advice to clients, drafting legal documents for clients, and representing clients in legal negotiations and court proceedings such as lawsuits, and is applied to the professional services of a lawyer or attorney at law, barrister,...
in Alaska and procedural rules for children's matters, probate
Probate
Probate is the legal process of administering the estate of a deceased person by resolving all claims and distributing the deceased person's property under the valid will. A probate court decides the validity of a testator's will...
, and appeals. The Alaska Legislature may change the court's procedural rules by passing an act expressing its intent to do so by a two-thirds majority of both houses.