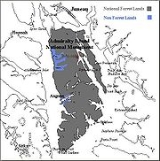 Encyclopedia
Admiralty Island is an island
Island
An island or isle is any piece of sub-continental land that is surrounded by water. Very small islands such as emergent land features on atolls can be called islets, cays or keys. An island in a river or lake may be called an eyot , or holm...
in the Alexander Archipelago
Alexander Archipelago
The Alexander Archipelago is a long archipelago, or group of islands, of North America off the southeastern coast of Alaska. It contains about 1,100 islands, which are the tops of the submerged coastal mountains that rise steeply from the Pacific Ocean. Deep channels and fjords separate the...
in Southeast Alaska
Alaska Panhandle
Southeast Alaska, sometimes referred to as the Alaska Panhandle, is the southeastern portion of the U.S. state of Alaska, which lies west of the northern half of the Canadian province of British Columbia. The majority of Southeast Alaska's area is part of the Tongass National Forest, the United...
, at 57°44′N 134°20′W. It is 145 km (90 mi) long and 56 km (35 mi) wide with an area of 4,264.1 km² (1,646.4 sq mi), making it the seventh largest island in the United States and the 132nd largest island in the world. It is one of the ABC islands of Alaska
ABC Islands (Alaska)
The ABC Islands is the colloquial name for the Alaskan islands of Admiralty, Baranof, and Chichagof in the northern part of the Alexander Archipelago. The islands are known for their wilderness and wildlife, which include a clade of brown bear that is more closely related to polar bears than to...
. The island is nearly cut in two by Seymour Canal
Seymour Canal
Seymour Canal is an inlet penetrating deep into the southeastern part of Admiralty Island, Southeast Alaska, United States. The inlet was first charted in 1794 by Joseph Whidbey, master of the HMS Discovery during George Vancouver's 1791-95 expedition. Vancouver later named it "Seymour's Channel"...
; to its east is the long, narrow Glass Peninsula
Glass Peninsula
Glass Peninsula is a peninsula extending southeast from Admiralty Island, between Seymour Canal and Stephens Passage, Southeast Alaska, United States. It was named by the U.S. Coast and Geodetic Survey for Commander Henry Glass, USN, who had made surveys in the area in 1881...
.

The island was named by George Vancouver
George Vancouver
Captain George Vancouver RN was an English officer of the British Royal Navy, best known for his 1791-95 expedition, which explored and charted North America's northwestern Pacific Coast regions, including the coasts of contemporary Alaska, British Columbia, Washington and Oregon...
in honor of his Royal Navy
Royal Navy
The Royal Navy is the naval warfare service branch of the British Armed Forces. Founded in the 16th century, it is the oldest service branch and is known as the Senior Service...
employers, the Admiralty
Admiralty
The Admiralty was formerly the authority in the Kingdom of England, and later in the United Kingdom, responsible for the command of the Royal Navy...
. Joseph Whidbey
Joseph Whidbey
Joseph Whidbey was a member of the Royal Navy who served on the Vancouver Expedition 1791–1795, and later achieved renown as a naval engineer. He is notable for having been the first European to discover and chart Admiralty Island in the Alexander Archipelago in 1794.Little is recorded of...
, master of the Discovery
HMS Discovery (1789)
HMS Discovery was a Royal Navy ship launched in 1789 and best known as the lead ship in George Vancouver's exploration of the west coast of North America in his famous 1791-1795 expedition. She was converted to a bomb vessel in 1798 and participated in the Battle of Copenhagen. Thereafter she...
during Vancouver's 1791-95 expedition
Vancouver Expedition
The Vancouver Expedition was a four-and-a-half-year voyage of exploration and diplomacy, commanded by Captain George Vancouver. The expedition circumnavigated the globe, touched five continents and changed the course of history for the indigenous nations and several European empires and their...
, explored it in July–August 1794, in the process circumnavigating it.

Known to the Tlingit as Xootsnoowú, which is sometimes interpreted as "Fortress of the Bear(s)", Admiralty Island is home to the highest density of brown bear
Brown Bear
The brown bear is a large bear distributed across much of northern Eurasia and North America. It can weigh from and its largest subspecies, the Kodiak Bear, rivals the polar bear as the largest member of the bear family and as the largest land-based predator.There are several recognized...
s in North America. An estimated 1,600 brown bears inhabit the island, outnumbering Admiralty's human residents nearly three to one. However, the name is a false cognate
False cognate
False cognates are pairs of words in the same or different languages that are similar in form and meaning but have different roots. That is, they appear to be, or are sometimes considered, cognates, when in fact they are not....
in Tlingit as the term actually comes from Xhoodzee Noow or "Burning Embers Fort" in reference to a large fire that occurred one time on the island and is not connected in any way to a reference to bears, but the mis-nomer continues. Angoon
Angoon, Alaska
Angoon is a city on Admiralty Island in Hoonah-Angoon Census Area, Alaska, United States. At the 2000 census the population was 572, by the 2010 census the population had declined to 459...
, a traditional Tlingit community home to 572 people, is the only settlement on the island, although an unpopulated section of the city of Juneau
Juneau, Alaska
The City and Borough of Juneau is a unified municipality located on the Gastineau Channel in the panhandle of the U.S. state of Alaska. It has been the capital of Alaska since 1906, when the government of the then-District of Alaska was moved from Sitka as dictated by the U.S. Congress in 1900...
comprises 264.68 km² (102.19 sq mi) (6.2 percent) of the island's land area near its northern end. The island's total population at the 2000 census
United States Census, 2000
The Twenty-second United States Census, known as Census 2000 and conducted by the Census Bureau, determined the resident population of the United States on April 1, 2000, to be 281,421,906, an increase of 13.2% over the 248,709,873 persons enumerated during the 1990 Census...
was 650.

The Greens Creek mine is an underground silver, gold, zinc and lead mine located on the northwest end of the island, within the national monument. It began operation in 1989.

The Pack Creek Brown Bear Viewing Area offers visitors the opportunity to observe brown bears in their natural habitat as they fish for salmon and interact with one another during the summer months. Permits are required for all visitors to Pack Creek which can be attained through the Forest Service.