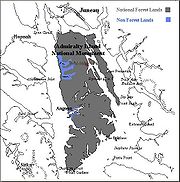 Admiralty Island National Monument is located on Admiralty Island
Admiralty Island
Admiralty Island is an island in the Alexander Archipelago in Southeast Alaska, at . It is 145 km  long and 56 km  wide with an area of 4,264.1 km² , making it the seventh largest island in the United States and the 132nd largest island in the world. It is one of the...
in Southeast Alaska. It was created December 1, 1978, and covers 955,747 acres (3,868 km²) of Tongass National Forest
Tongass National Forest
The Tongass National Forest in southeastern Alaska is the largest national forest in the United States at 17 million acres . Most of its area is part of the temperate rain forest WWF ecoregion, itself part of the larger Pacific temperate rain forest WWF ecoregion, and is remote enough to be home...
in the Panhandle
Alaska Panhandle
Southeast Alaska, sometimes referred to as the Alaska Panhandle, is the southeastern portion of the U.S. state of Alaska, which lies west of the northern half of the Canadian province of British Columbia. The majority of Southeast Alaska's area is part of the Tongass National Forest, the United...
of southeast Alaska
Alaska
Alaska is the largest state in the United States by area. It is situated in the northwest extremity of the North American continent, with Canada to the east, the Arctic Ocean to the north, and the Pacific Ocean to the west and south, with Russia further west across the Bering Strait...
. The remoteness of the monument led Congress to pass legislation designating all but 18,351 acres (74 km²) of the monument as the Kootznoowoo Wilderness
Kootznoowoo Wilderness
The temperate rainforests of Admiralty Island's Kootznoowoo Wilderness are unique among the of federally protected Wilderness in Southeast Alaska....
, ensuring that the vast bulk of this monument will be permanently protected from development. The monument is administered by the U.S. Forest Service, an agency within the U.S. Department of Agriculture.

Western Hemlock
Western Hemlock
Tsuga heterophylla. the Western Hemlock, is a species of hemlock native to the west coast of North America, with its northwestern limit on the Kenai Peninsula, Alaska, and its southeastern limit in northern Sonoma County, California.-Habitat:...
, Sitka Spruce
Sitka Spruce
Picea sitchensis, the Sitka Spruce, is a large coniferous evergreen tree growing to 50–70 m tall, exceptionally to 95 m tall, and with a trunk diameter of up to 5 m, exceptionally to 6–7 m diameter...
and Western Redcedar
Thuja plicata
Thuja plicata, commonly called Western or pacific red cedar, giant or western arborvitae, giant cedar, or shinglewood, is a species of Thuja, an evergreen coniferous tree in the cypress family Cupressaceae native to western North America...
dominate the prolific rainforest
Rainforest
Rainforests are forests characterized by high rainfall, with definitions based on a minimum normal annual rainfall of 1750-2000 mm...
vegetation; wildlife in abundance includes brown bear
Brown Bear
The brown bear is a large bear distributed across much of northern Eurasia and North America. It can weigh from and its largest subspecies, the Kodiak Bear, rivals the polar bear as the largest member of the bear family and as the largest land-based predator.There are several recognized...
, bald eagles, many species of salmon
Salmon
Salmon is the common name for several species of fish in the family Salmonidae. Several other fish in the same family are called trout; the difference is often said to be that salmon migrate and trout are resident, but this distinction does not strictly hold true...
, whale
Whale
Whale is the common name for various marine mammals of the order Cetacea. The term whale sometimes refers to all cetaceans, but more often it excludes dolphins and porpoises, which belong to suborder Odontoceti . This suborder also includes the sperm whale, killer whale, pilot whale, and beluga...
s, and deer
Deer
Deer are the ruminant mammals forming the family Cervidae. Species in the Cervidae family include white-tailed deer, elk, moose, red deer, reindeer, fallow deer, roe deer and chital. Male deer of all species and female reindeer grow and shed new antlers each year...
. It has more brown bears than the entire lower 48 states, and one of the highest densities of bald eagles in the world.