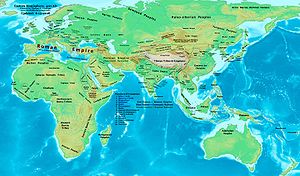 Year 400 was a leap year starting on Sunday
Leap year starting on Sunday
This is the calendar for any leap year starting on Sunday, January 1 , such as 1956, 1984, 2012, 2040, or 2068.This is the only leap year with three occurrences of Friday the 13th, each three months apart in January, April, and July....
(link will display the full calendar) of the Julian calendar
Julian calendar
The Julian calendar began in 45 BC as a reform of the Roman calendar by Julius Caesar. It was chosen after consultation with the astronomer Sosigenes of Alexandria and was probably designed to approximate the tropical year .The Julian calendar has a regular year of 365 days divided into 12 months...
. At the time, it was known as the Year of the Consulship of Stilicho and Aurelianus (or, less frequently, year 1153 Ab urbe condita
Ab urbe condita
Ab urbe condita is Latin for "from the founding of the City ", traditionally set in 753 BC. AUC is a year-numbering system used by some ancient Roman historians to identify particular Roman years...
). The denomination 400 for this year has been used since the early medieval period, when the Anno Domini
Anno Domini
and Before Christ are designations used to label or number years used with the Julian and Gregorian calendars....
calendar era
Calendar era
A calendar era is the year numbering system used by a calendar. For example, the Gregorian calendar numbers its years in the Western Christian era . The instant, date, or year from which time is marked is called the epoch of the era...
became the prevalent method in Europe for naming years.