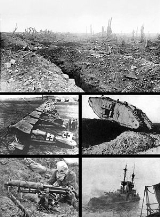 Quotations
World War I was a world conflict, raging from August 1914 to the final Armistice on November 11, 1918. The Allied Powers, led by the British Empire, France, Russia until March 1918, and the United States after 1917, defeated the Central Powers, led by the German Empire, Austro-Hungarian Empire and the Ottoman Empire.