Encyclopedia
"In Flanders Fields" is one of the most notable poems written during World War I, created in the form of a French rondeau
Rondeau (poetry)
This article is about the poetry form. For other uses, see Rondeau.A rondeau is a form of French poetry with 15 lines written on two rhymes, as well as a corresponding musical form developed to set this characteristic verse structure...
. It has been called "the most popular poem" produced during that period. Canadian
Canada
Canada is a North American country consisting of ten provinces and three territories. Located in the northern part of the continent, it extends from the Atlantic Ocean in the east to the Pacific Ocean in the west, and northward into the Arctic Ocean...
physician and Lieutenant Colonel
Lieutenant colonel
Lieutenant colonel is a rank of commissioned officer in the armies and most marine forces and some air forces of the world, typically ranking above a major and below a colonel. The rank of lieutenant colonel is often shortened to simply "colonel" in conversation and in unofficial correspondence...
John McCrae
John McCrae
Lieutenant Colonel John Alexander McCrae was a Canadian poet, physician, author, artist and soldier during World War I and a surgeon during the Second Battle of Ypres...
wrote it on 3 May 1915 (see 1915 in poetry
1915 in poetry
Nationality words link to articles with information on the nation's poetry or literature .-Events:* Russian poet Sergei Yesenin , published his first book of poems titled "Radumitsa."...
), after he witnessed the death of his friend, Lieutenant Alexis Helmer, 22 years old, the day before. The poem was first published on 8 December of that year in the London
London
London is the capital city of :England and the :United Kingdom, the largest metropolitan area in the United Kingdom, and the largest urban zone in the European Union by most measures. Located on the River Thames, London has been a major settlement for two millennia, its history going back to its...
-based magazine Punch
Punch (magazine)
Punch, or the London Charivari was a British weekly magazine of humour and satire established in 1841 by Henry Mayhew and engraver Ebenezer Landells. Historically, it was most influential in the 1840s and 50s, when it helped to coin the term "cartoon" in its modern sense as a humorous illustration...
.

The poppies referred to in the poem grew in profusion in Flanders
Flanders
Flanders is the community of the Flemings but also one of the institutions in Belgium, and a geographical region located in parts of present-day Belgium, France and the Netherlands. "Flanders" can also refer to the northern part of Belgium that contains Brussels, Bruges, Ghent and Antwerp...
in the disturbed earth of the battlefields and cemeteries where war casualties were buried and thus became a symbol of Remembrance Day
Remembrance Day
Remembrance Day is a memorial day observed in Commonwealth countries since the end of World War I to remember the members of their armed forces who have died in the line of duty. This day, or alternative dates, are also recognized as special days for war remembrances in many non-Commonwealth...
(see Remembrance poppy
Remembrance poppy
The remembrance poppy has been used since 1920 to commemorate soldiers who have died in war. They were first used in the United States to commemorate soldiers who died in World War I . Today, they are mainly used in current and former Commonwealth states to commemorate their servicemen and women...
). The poem is often part of Remembrance Day solemnities in Allied countries
Allies of World War I
The Entente Powers were the countries at war with the Central Powers during World War I. The members of the Triple Entente were the United Kingdom, France, and the Russian Empire; Italy entered the war on their side in 1915...
which contributed troops to World War I
World War I
World War I , which was predominantly called the World War or the Great War from its occurrence until 1939, and the First World War or World War I thereafter, was a major war centred in Europe that began on 28 July 1914 and lasted until 11 November 1918...
, particularly in countries of the British Empire
British Empire
The British Empire comprised the dominions, colonies, protectorates, mandates and other territories ruled or administered by the United Kingdom. It originated with the overseas colonies and trading posts established by England in the late 16th and early 17th centuries. At its height, it was the...
that did so.

The poem "In Flanders Fields" was written after John McCrae witnessed the death, and presided over the funeral, of a friend, Lt. Alexis Helmer. By most accounts it was written in his notebook and later rejected by McCrae. Ripped out of his notebook, it was rescued by a fellow officer, Francis Alexander Scrimger, and later published in Punch
Punch (magazine)
Punch, or the London Charivari was a British weekly magazine of humour and satire established in 1841 by Henry Mayhew and engraver Ebenezer Landells. Historically, it was most influential in the 1840s and 50s, when it helped to coin the term "cartoon" in its modern sense as a humorous illustration...
magazine. However, this story is rejected by the editor at the time:

The first chapter of In Flanders Fields and Other Poems (a 1919 collection of poems by John McCrae) gives the text of the poem as follows:

An autographed copy of the poem (reproduced at the start of this same book) uses grow (instead of blow) in the first line. The book includes a note seeking to explain the discrepancy by saying "This was probably written from memory". 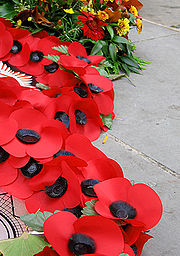 The poem has achieved near-mythical status in contemporary Canada and is one of the nation's most prominent symbols. Most Remembrance Day
Remembrance Day
Remembrance Day is a memorial day observed in Commonwealth countries since the end of World War I to remember the members of their armed forces who have died in the line of duty. This day, or alternative dates, are also recognized as special days for war remembrances in many non-Commonwealth...
ceremonies will feature a reading of the poem in some form (it is also sung in some places), and many Canadian school children memorize the verse. A quotation from the poem appears on the Canadian ten-dollar bill
Canadian ten-dollar bill
The Canadian ten-dollar bill is one of the most common banknotes of the Canadian dollar. It was the first bill printed when Canada changed its banknotes in 2001....
.
The poem is part of Remembrance Day ceremonies in the United Kingdom, where it holds as one of the nation's best-loved, and is occasionally featured in Memorial Day
Memorial Day
Memorial Day is a United States federal holiday observed on the last Monday of May. Formerly known as Decoration Day, it originated after the American Civil War to commemorate the fallen Union soldiers of the Civil War...
ceremonies in the United States.

The poem is printed in materials published by veterans' organizations in Canada and the United States.

The use of "grow" in the first line appears in a handwritten and autographed copy for the 1919 edition of McCrae's poems; the editor, Andrew Macphail
Andrew Macphail
John Andrew Macphail, Kt, MD, MRCS was a Canadian physician, author, professor of medicine, and soldier. "A prolific and versatile writer, Sir Andrew Macphail was one of the most influential Canadian intellectuals of his time."-Life and Work:Macphail was born in Orwell, Prince Edward Island, on...
, notes in the caption, "This was probably written from memory as "grow" is used in place of "blow" in the first line." However, a tracing of a holograph copy on the letterhead of Captain Gilbert Tyndale-Lea M.C. now held by the Imperial War Museum
Imperial War Museum
Imperial War Museum is a British national museum organisation with branches at five locations in England, three of which are in London. The museum was founded during the First World War in 1917 and intended as a record of the war effort and sacrifice of Britain and her Empire...
claims that the original dates from 29 April 1915 and that it was given to the captain by the poet on that date. This clearly shows 'grow' in the first line and would change the publicly-held belief as to its date of composition and original first line. This was certainly changed by the time he submitted it to Punch
Punch (magazine)
Punch, or the London Charivari was a British weekly magazine of humour and satire established in 1841 by Henry Mayhew and engraver Ebenezer Landells. Historically, it was most influential in the 1840s and 50s, when it helped to coin the term "cartoon" in its modern sense as a humorous illustration...
for publication in December of that year. Whether McCrae originally wrote 'grow' or 'blow' in the first line might never clearly be established.

Critic Paul Fussell
Paul Fussell
Paul Fussell is an American cultural and literary historian, author and university professor. His writings cover a variety of genres, from scholarly works on eighteenth-century English literature to commentary on America’s class system...
, in The Great War and Modern Memory, claimed to find sharp distinctions between the pastoral, sacrificial tone of the poem's first nine lines and the "recruiting-poster rhetoric" of the poem's third stanza. Fussell said the poem, first appearing in the 1915 context of the early stages of World War I, would have, at that time, served to denigrate any negotiated peace which would end the war. In this context, Fussel called these lines "a propaganda argument," saying "words like vicious and stupid would not seem to go too far."

An official adaptation into French, used by the Canadian government in Remembrance Day ceremonies, was written by Jean Pariseau and is entitled Au champ d'honneur.

"In Flanders Fields" is sung, rather than recited, every year at the televised national Remembrance Day service at Ottawa, Canada. The musical setting that has been used for many years is the Soprano and Alto version of a composition by a Canadian, Alexander Tilley. Tilley's setting of the poem also exists in a full choral arrangement for S.A.T.B. chorus with pianoforte accompaniment.

American composer, Charles Ives
Charles Ives
Charles Edward Ives was an American modernist composer. He is one of the first American composers of international renown, though Ives' music was largely ignored during his life, and many of his works went unperformed for many years. Over time, Ives came to be regarded as an "American Original"...
composed a version of "In Flanders Fields." It appears in the 114 Songs collection that was published in 1922.

On their 1979 album Join Hands
Join Hands
Join Hands is the second studio album by English post-punk band Siouxsie and the Banshees. It was released by Polydor Records in the UK in September 1979. The final track is a studio recording of "The Lord's Prayer", the song that they are famous for playing in their debut live performance at the...
rock band Siouxsie & the Banshees
Siouxsie & the Banshees
Siouxsie and the Banshees were a British rock band formed in 1976 by vocalist Siouxsie Sioux and bassist Steven Severin. Initially associated with the English punk rock scene, the band rapidly evolved to create "a form of post-punk discord full of daring rhythmic and sonic experimentation"...
used the first lines of the poem for the song "Poppy Day".