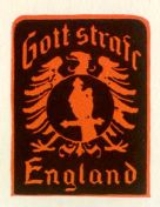 "Gott strafe England" was a slogan
Slogan
A slogan is a memorable motto or phrase used in a political, commercial, religious and other context as a repetitive expression of an idea or purpose. The word slogan is derived from slogorn which was an Anglicisation of the Scottish Gaelic sluagh-ghairm . Slogans vary from the written and the...
, during World War I
World War I
World War I , which was predominantly called the World War or the Great War from its occurrence until 1939, and the First World War or World War I thereafter, was a major war centred in Europe that began on 28 July 1914 and lasted until 11 November 1918...
, used by the German
Germany
Germany , officially the Federal Republic of Germany , is a federal parliamentary republic in Europe. The country consists of 16 states while the capital and largest city is Berlin. Germany covers an area of 357,021 km2 and has a largely temperate seasonal climate...
Army
Army
An army An army An army (from Latin arma "arms, weapons" via Old French armée, "armed" (feminine), in the broadest sense, is the land-based military of a nation or state. It may also include other branches of the military such as the air force via means of aviation corps...
. The phrase means "May God punish England". It was created by the German-Jewish poet Ernst Lissauer
Ernst Lissauer
Ernst Lissauer was a German-Jewish poet and dramatist remembered for the phrase Gott strafe England.He also created the Hassgesang gegen England, or ""....
(1882–1937), who also wrote the poem Hassgesang gegen England (lit. "Hate song against England", better known as "Hymn of Hate").

In the hysterical atmosphere brought on by World War I
World War I
World War I , which was predominantly called the World War or the Great War from its occurrence until 1939, and the First World War or World War I thereafter, was a major war centred in Europe that began on 28 July 1914 and lasted until 11 November 1918...
, Lissauer's Hassgesang became an instant success. Rupprecht of Bavaria, commander of the Sixth Army, ordered that copies be distributed among his own troops. The Kaiser was pleased enough to confer upon the author the Order of the Royal Eagle. An informative account of Lissauer and the "Hymn of Hate" can be found in Stefan Zweig
Stefan Zweig
Stefan Zweig was an Austrian novelist, playwright, journalist and biographer. At the height of his literary career, in the 1920s and 1930s, he was one of the most famous writers in the world.- Biography :...
's The World of Yesterday.

Even despite the general atmosphere of condemnation against England for "causing the war", the Hassgesang was not without its critics.
The Frankfurter Zeitung
Frankfurter Zeitung
The Frankfurter Zeitung was a German language newspaper that appeared from 1856 to 1943. It emerged from a market letter that was published in Frankfurt...
was bold enough to denounce the "impotent hatred that spits at us everywhere".
With one or two exceptions it was not widely popular among Lissauer's fellow Jews, who had a tendency to identify with England's liberal tradition.
The publicist Benjamin Segel said that the poem did not contain "as much as a spark of Jewish sentiment."

Unofficial stamps with the motto were produced by organisations, such as the "Federation of the Germans in Lower Austria".
In at least 1916 browncoal bricks were embossed with the motto "Gott Strafe England" and sold in the Netherlands.

In 1946, in Hamburg, Germany, "Ausgebombte" (bombed out refugees) demonstrators sang the song.

In England in 1916,the music hall singer, Tom Clare wrote a comic song "My Hymn of hate" giving a list of people and phenomena that he hated, in a comic vein. The list included, for example, journalists who criticized how the war was being run, but didn't want to join the army themselves.

“Gott strafe England” and “God save the King!”

God this, God that, and God the other thing –


George Bellows
George Bellows
George Wesley Bellows was an American realist painter, known for his bold depictions of urban life in New York City, becoming, according to the Columbus Museum of Art, "the most acclaimed American artist of his generation".-Youth:Bellows was born and raised in Columbus, Ohio...
created a lithograph titled " Gott Strafe ".
Louis Raemaekers
Louis Raemaekers
Louis Raemaekers was a Dutch painter and cartoonist for the Amsterdam Telegraaf during World War I, noted for his anti-German stance....
created a cartoon titled "Gott strafe England".

The phrase gave rise to the term "Strafing
Strafing
Strafing is the practice of attacking ground targets from low-flying aircraft using aircraft-mounted automatic weapons. This means, that although ground attack using automatic weapons fire is very often accompanied with bombing or rocket fire, the term "strafing" does not specifically include the...
" and to the nickname "Strafer" being given to the British General William Gott
William Gott
Lieutenant-General William Henry Ewart Gott CB, CBE, DSO and bar, MC , nicknamed "Strafer", was a British Army officer during both the First and Second World Wars, reaching the rank of lieutenant-general when serving in the British Eighth Army.-Military career:Educated at Harrow School he was...
in World War II.
The source of this article is wikipedia, the free encyclopedia.  The text of this article is licensed under the GFDL.