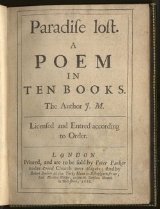 Quotations
Paradise Lost is an epic poem by the 17th century English poet John Milton. The poem concerns the Christian story of the fall of Satan and his brethren and the rise of Man: the temptation of Adam and Eve by Satan and their expulsion from the Garden of Eden.

Note that chapter and line references correspond with the 1674 version of the text, available online here.