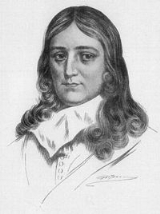 Overview
John Milton was an English poet, polemicist, a scholarly man of letters, and a civil servant for the Commonwealth (republic) of England
Commonwealth of England
The Commonwealth of England was the republic which ruled first England, and then Ireland and Scotland from 1649 to 1660. Between 1653–1659 it was known as the Commonwealth of England, Scotland and Ireland...
under Oliver Cromwell
Oliver Cromwell
Oliver Cromwell was an English military and political leader who overthrew the English monarchy and temporarily turned England into a republican Commonwealth, and served as Lord Protector of England, Scotland, and Ireland....
. He wrote at a time of religious flux and political upheaval, and is best known for his epic poem
Epic poetry
An epic is a lengthy narrative poem, ordinarily concerning a serious subject containing details of heroic deeds and events significant to a culture or nation. Oral poetry may qualify as an epic, and Albert Lord and Milman Parry have argued that classical epics were fundamentally an oral poetic form...
Paradise Lost
Paradise Lost
Paradise Lost is an epic poem in blank verse by the 17th-century English poet John Milton. It was originally published in 1667 in ten books, with a total of over ten thousand individual lines of verse...
.

Milton wrote in Latin, Italian and English, and had an international reputation during his lifetime. His poetry and prose reflect deep convictions and addressed urgent, contemporary issues (for example, his celebrated Areopagitica
Areopagitica
Areopagitica: A speech of Mr. John Milton for the liberty of unlicensed printing to the Parliament of England is a 1644 prose polemical tract by English author John Milton against censorship...
is written in condemnation of pre-publication censorship).

After his death, his critical reception oscillated, a state of affairs that continued through the centuries.

How is the character of satan depicted
More

Milton's view of the soul

Milton's role in the Restoration

How did Milton's personal experiences inspire him to write Areopagitica?
More

And so sepúlchred in such pomp dost lie,That kings for such a tomb would wish to die.

How soon hath Time, the subtle thief of youth,Stol'n on his wing my three-and-twentieth year.

Captain or Colonel, or Knight in Arms,Whose chance on these defenceless doors may seize,If ever deed of honour did thee please,Guard them, and him within protect from harms.

Sonnet VIII: When the Assault was Intended to the City.

The great Emathian conqueror bid spareThe house of Pindarus, when temple and towerWent to the ground.

Sonnet VIII: When the Assault was intended to the City.

O nightingale, that on yon bloomy sprayWarbl'st at eve, when all the woods are still.

At a Solemn Music.
More
x