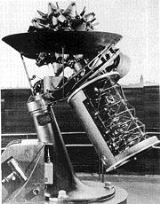 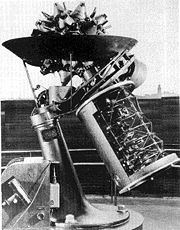 The first modern planetarium projectors were designed and built in 1924 by the Zeiss Works of Jena, Germany in 1924. Zeiss projectors are designed to sit in the middle of a dark, dome
Dome
A dome is a structural element of architecture that resembles the hollow upper half of a sphere. Dome structures made of various materials have a long architectural lineage extending into prehistory....
-covered room and project an accurate image of the star
Star
A star is a massive, luminous sphere of plasma held together by gravity. At the end of its lifetime, a star can also contain a proportion of degenerate matter. The nearest star to Earth is the Sun, which is the source of most of the energy on Earth...
s and other astronomical object
Astronomical object
Astronomical objects or celestial objects are naturally occurring physical entities, associations or structures that current science has demonstrated to exist in the observable universe. The term astronomical object is sometimes used interchangeably with astronomical body...
s on the dome. They are generally large, complicated, and imposing machines.

The first Zeiss Mark I projector (the first planetarium projector in the world) was installed in the Deutsches Museum
Deutsches Museum
The Deutsches Museum in Munich, Germany, is the world's largest museum of technology and science, with approximately 1.5 million visitors per year and about 28,000 exhibited objects from 50 fields of science and technology. The museum was founded on June 28, 1903, at a meeting of the Association...
in Munich
Munich
Munich The city's motto is "" . Before 2006, it was "Weltstadt mit Herz" . Its native name, , is derived from the Old High German Munichen, meaning "by the monks' place". The city's name derives from the monks of the Benedictine order who founded the city; hence the monk depicted on the city's coat...
in August, 1923. It possessed a distinctive appearance, with a single sphere of projection lenses supported above a large, angled "planet cage". Marks II through VI were similar in appearance, using two spheres of star projectors separated along a central axis that contained projectors for the planets. Beginning with Mark VII, the central axis was eliminated and the two spheres were merged into a single, egg-shaped projection unit.


History of development and production

The Mark I was created in 1923–1924 and was the world's first modern planetarium projector. The Mark II was developed during the 1930s jointly by Carl Zeiss AG factories in Jena (East Germany) and Oberkochen (West Germany).
Following WWII and the division of Germany
History of Germany since 1945
As a consequence of the defeat of Nazi Germany in World War II Germany was split between the two global blocs in the East and West, a period known as the division of Germany. While seven million prisoners and forced laborers left Germany, over 10 million German speaking refugees arrived there from...
, each factory developed its own line of projectors.
Marks III – VI were developed in Oberkochen (West Germany) from 1957–1989. Meanwhile, the East German facility in Jena developed the ZKP projector line. The Mark VII was developed in 1993 and was the first joint project of the two Zeiss factories following German reunification
German reunification
German reunification was the process in 1990 in which the German Democratic Republic joined the Federal Republic of Germany , and when Berlin reunited into a single city, as provided by its then Grundgesetz constitution Article 23. The start of this process is commonly referred by Germans as die...
.

, Zeiss currently manufactures three main models of planetarium projectors. The flagship Universarium models continue the "Mark" model designation and use a single "starball" design, where the fixed stars are projected from a single egg-shaped projector, and moving objects such as planets have their own independent projectors or are projected using a full-dome digital projection system. The Starmaster line of projectors are designed for smaller domes than the Universarium, but also use the single starball design. The Skymaster ZKP projectors are designed for the smallest domes and use a "dumbell" design similar to the Mark II-VI projectors, where two smaller starballs for the northern and southern hemispheres are connected by a truss containing projectors for planets and other moving objects.


Partial list of planetariums that have featured a Zeiss projector

Between 1923 and 2011, Zeiss manufactured a total of 631 projectors. Therefore the following table is highly incomplete.