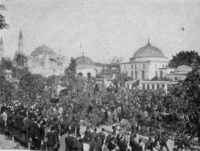 The Revolution restored the parliament, which had been suspended by the Sultan in 1878. However, the process of supplanting the monarchic institutions with constitutional institutions and electoral policies was neither as simple nor as bloodless as the regime change. The periphery of the Empire continued to splinter under the pressures of local revolutions. 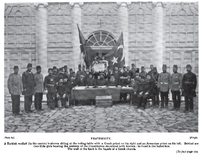 "...Then we heard of the onward march on Constantinople, of the Army of Liberty, the 3rd Army Corps of Salonica, still faithful to the Committee of Union and Progress. Volunteers were called for, and Armenians, Jews, Greeks, Bulgarians, Koords and Lazes, all flocked to the Turkish standard. For the first time in the history of the world, Christian stood shoulder to shoulder with Moslem in a triumphant onslaught for the recovery of liberty and the reinstatement of the Constitution. Constantinople was besieged. Sultan Hamid 's own guard and the officerless Constantinople Army Corps he had bribed were conquered. Hamid was dethroned and Mohamed V., subordinate to the Constitution and the Committee of Union and Progress, reigned in his stead. "
"Liberty and The Ottoman" by Robert Chambers

The revolt began in mid-April, when, under Young Turk leadership, the 3rd Army Corps in Macedonia
Macedonia (region)
Macedonia is a geographical and historical region of the Balkan peninsula in southeastern Europe. Its boundaries have changed considerably over time, but nowadays the region is considered to include parts of five Balkan countries: Greece, the Republic of Macedonia, Bulgaria, Albania, Serbia, as...
marched against Constantinople. Major Ahmed Niyazi, fearing discovery of his political moves by an investigatory committee sent from the capital, decamped from Resen on July 3, 1908 with 200 followers demanding restoration of the constitution. The sultan's attempt to suppress this uprising failed due to the popularity of the movement among the troops themselves. Rebellion spread rapidly. On July 24, Abdül Hamid announced restoration of the constitution.