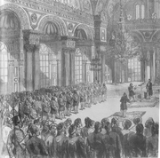 Ottomanism (Osmanlılık or Osmanlıcılık) was a concept which developed prior to the First Constitutional Era
First Constitutional Era (Ottoman Empire)
The First Constitutional Era of the Ottoman Empire was the period of constitutional monarchy from the promulgation of the Kanûn-ı Esâsî , written by members of the Young Ottomans, on 23 November 1876 until 13 February 1878...
of the Ottoman Empire
Ottoman Empire
The Ottoman EmpireIt was usually referred to as the "Ottoman Empire", the "Turkish Empire", the "Ottoman Caliphate" or more commonly "Turkey" by its contemporaries...
. Its proponents believed that it could solve the social issues that the empire was facing. Ottomanism was highly affected by thinkers such as Montesquieu and Rousseau and the French Revolution
French Revolution
The French Revolution , sometimes distinguished as the 'Great French Revolution' , was a period of radical social and political upheaval in France and Europe. The absolute monarchy that had ruled France for centuries collapsed in three years...
. It promoted the equality among the millet
Millet (Ottoman Empire)
Millet is a term for the confessional communities in the Ottoman Empire. It refers to the separate legal courts pertaining to "personal law" under which communities were allowed to rule themselves under their own system...
s. The idea originated amongst the Young Ottomans
Young Ottomans
The Young Ottomans were a secret organization of Ottoman nationalist intellectuals formed in 1865, influenced by such Western thinkers as Montesquieu and Rousseau and the French Revolution. They developed the concept of Ottomanism, aligned with these thinkers...
. Put simply, Ottomanism stated that all subjects were equal before the law. The essence of the millet system was not dismantled, but secular organizations and policies were applied. Primary education, conscription, head tax and military service
Military service
Military service, in its simplest sense, is service by an individual or group in an army or other militia, whether as a chosen job or as a result of an involuntary draft . Some nations require a specific amount of military service from every citizen...
were to be applied to non-Muslims and Muslims alike.

The Hatt-ı Hümayun
Hatt-i humayun
Hatt-i humayun , also known as hatt-i sharif , is the diplomatics term for a document or handwritten note of an official nature by an Ottoman Sultan. The terms come from hatt , hümayun and şerif...
of 1856 which promised full equality regardless of religion, and the Nationality Law
Nationality law
Nationality law is the branch of law concerned with the questions of nationality and citizenship, and how these statuses are acquired, transmitted, or lost. By custom, a state has the right to determine who its nationals and citizens are. Such determinations are usually made by custom, statutory...
of 1869, which created a common Ottoman citizenship irrespective of religious or ethnic affiliation were precursors to Ottomanism. Ottomanism was rejected by many in the non-Muslim millets and by many Muslims. To the former, it was perceived as a step towards dismantling their traditional privileges. Meanwhile, the Muslims saw it as the elimination of their own superior position. There were claims that Ottomanism was a reaction to the Tanzimat
Tanzimat
The Tanzimât , meaning reorganization of the Ottoman Empire, was a period of reformation that began in 1839 and ended with the First Constitutional Era in 1876. The Tanzimât reform era was characterized by various attempts to modernize the Ottoman Empire, to secure its territorial integrity against...
, the era of intensive restructuring of the Ottoman Empire by the bureaucratic elite.