Encyclopedia
Yellowcake is a kind of uranium
Uranium
Uranium is a silvery-white metallic chemical element in the actinide series of the periodic table, with atomic number 92. It is assigned the chemical symbol U. A uranium atom has 92 protons and 92 electrons, of which 6 are valence electrons...
concentrate powder
Powder (substance)
A powder is a dry,thick bulk solid composed of a large number of very fine particles that may flow freely when shaken or tilted. Powders are a special sub-class of granular materials, although the terms powder and granular are sometimes used to distinguish separate classes of material...
obtained from leach solutions, in an intermediate step in the processing of uranium ores. Yellowcake concentrates are prepared by various extraction and refining methods, depending on the types of ores. Typically, yellowcakes are obtained through the milling and chemical processing of uranium ore
Ore
An ore is a type of rock that contains minerals with important elements including metals. The ores are extracted through mining; these are then refined to extract the valuable element....
forming a coarse powder which has a pungent odour, is insoluble in water and contains about 80% uranium oxide, which melts at approximately 2878 °C. Although uranium is one of the densest metals on Earth, yellowcake is relatively light, with a density approximately that of elemental sulfur
Sulfur
Sulfur or sulphur is the chemical element with atomic number 16. In the periodic table it is represented by the symbol S. It is an abundant, multivalent non-metal. Under normal conditions, sulfur atoms form cyclic octatomic molecules with chemical formula S8. Elemental sulfur is a bright yellow...
.

The ore is first crushed to a fine powder by passing raw uranium ore through crushers and grinders to produce "pulped" ore. This is further processed with concentrated acid
Acid
An acid is a substance which reacts with a base. Commonly, acids can be identified as tasting sour, reacting with metals such as calcium, and bases like sodium carbonate. Aqueous acids have a pH of less than 7, where an acid of lower pH is typically stronger, and turn blue litmus paper red...
, alkaline, or peroxide
Peroxide
A peroxide is a compound containing an oxygen–oxygen single bond or the peroxide anion .The O−O group is called the peroxide group or peroxo group. In contrast to oxide ions, the oxygen atoms in the peroxide ion have an oxidation state of −1.The simplest stable peroxide is hydrogen peroxide...
solutions to leach out the uranium. Yellowcake is what remains after drying and filtering. The yellowcake produced by most modern mills is actually brown or black, not yellow; the name comes from the color and texture of the concentrates produced by early mining operations.

Initially, the compounds formed in yellowcakes were not identified; in 1970, the U.S. Bureau of Mines still referred to yellowcakes as the final precipitate formed in the milling process and considered it to be ammonium diuranate
Ammonium diuranate
Ammonium diuranate or ' , is one of the intermediate chemical forms of uranium produced during yellowcake production. The name 'yellowcake' originally given to this bright yellow substance, now applies to mixtures of uranium oxides which are actually hardly ever yellow...
or sodium diuranate
Sodium diuranate
Sodium diuranate, Na2U2O7·6H2O, is a uranium salt also known as the yellow oxide of uranium. Along with ammonium diuranate it was a component in early yellowcakes, the ratio of the two species determined by process conditions; yellowcake is now largely a mix of uranium oxides...
. The compositions were variable and depended upon the leachant and subsequent precipitating conditions. Among the compounds identified in yellowcakes include: uranyl hydroxide
Uranyl hydroxide
Uranyl hydroxide is a hydroxide of uranium with the chemical formula UO22 in the monomeric form and 24 in the dimeric; both forms may exist in normal aqueous media...
, uranyl sulfate
Uranyl sulfate
Uranyl sulfate a sulfate of uranium is an odorless lemon-yellow sand-like solid in its pure crystalline form.It has found use as a negative stain in microscopy and tracer in biology...
, sodium para-uranate, and uranyl peroxide
Uranyl peroxide
Uranyl peroxide or uranium peroxide hydrate is a pale-yellow, soluble peroxide of uranium. It is found present at one stage of the enriched uranium fuel cycle and in yellowcake prepared via the in situ leaching and resin ion exchange system. This compound, also expressed as:UO3··, is very similar...
, along with various uranium oxide
Uranium oxide
Uranium oxide is an oxide of the element uranium.The metal uranium forms several oxides:* Uranium dioxide or uranium oxide * Uranium trioxide or uranium oxide...
s. Modern yellowcake typically contains 70 to 90 percent triuranium octoxide (U3O8) by weight. Other oxides such as uranium dioxide
Uranium dioxide
Uranium dioxide or uranium oxide , also known as urania or uranous oxide, is an oxide of uranium, and is a black, radioactive, crystalline powder that naturally occurs in the mineral uraninite. It is used in nuclear fuel rods in nuclear reactors. A mixture of uranium and plutonium dioxides is used...
(UO2) and uranium trioxide
Uranium trioxide
Uranium trioxide , also called uranyl oxide, uranium oxide, and uranic oxide, is the hexavalent oxide of uranium. The solid may be obtained by heating uranyl nitrate to 400 °C. Its most commonly encountered polymorph, γ-UO3, is a yellow-orange powder.-Production and use:There are three methods...
(UO3) exist. 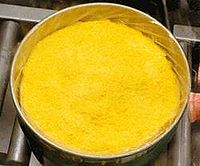 Yellowcake is used in the preparation of uranium fuel for nuclear reactor
Nuclear reactor
A nuclear reactor is a device to initiate and control a sustained nuclear chain reaction. Most commonly they are used for generating electricity and for the propulsion of ships. Usually heat from nuclear fission is passed to a working fluid , which runs through turbines that power either ship's...
s, for which it is smelted into purified UO2 for use in fuel rods for pressurized heavy-water reactors and other systems that use natural unenriched uranium
Natural uranium
Natural uranium refers to refined uranium with the same isotopic ratio as found in nature. It contains 0.7 % uranium-235, 99.3 % uranium-238, and a trace of uranium-234 by weight. In terms of the amount of radioactivity, approximately 2.2 % comes from uranium-235, 48.6 % uranium-238, and 49.2 %...
.

Purified uranium metal (not the uranium oxide) can also be enriched in the isotope U-235. In this process, the uranium is combined with fluorine
Fluorine
Fluorine is the chemical element with atomic number 9, represented by the symbol F. It is the lightest element of the halogen column of the periodic table and has a single stable isotope, fluorine-19. At standard pressure and temperature, fluorine is a pale yellow gas composed of diatomic...
to form uranium hexafluoride
Uranium hexafluoride
Uranium hexafluoride , referred to as "hex" in the nuclear industry, is a compound used in the uranium enrichment process that produces fuel for nuclear reactors and nuclear weapons. It forms solid grey crystals at standard temperature and pressure , is highly toxic, reacts violently with water...
gas (UF6). Next, that undergoes isotope separation
Isotope separation
Isotope separation is the process of concentrating specific isotopes of a chemical element by removing other isotopes, for example separating natural uranium into enriched uranium and depleted uranium. This is a crucial process in the manufacture of uranium fuel for nuclear power stations, and is...
through the process of gaseous diffusion
Gaseous diffusion
Gaseous diffusion is a technology used to produce enriched uranium by forcing gaseous uranium hexafluoride through semi-permeable membranes. This produces a slight separation between the molecules containing uranium-235 and uranium-238 . By use of a large cascade of many stages, high separations...
, or in a gas centrifuge
Gas centrifuge
A gas centrifuge is a device that performs isotope separation of gases. A centrifuge relies on the principles of centripetal force accelerating molecules so that particles of different masses are physically separated in a gradient along the radius of a rotating container.A prominent use of gas...
. This can produce low-enriched uranium containing up to 20 percent U-235 that is suitable for use in most large civilian electric-power reactors (some nuclear power reactor designs such as CANDU heavy water reactors use natural uranium oxides with <1% U-235 as fuel). With further processing one obtains highly enriched uranium, containing 20% or more U-235, that is suitable for use in compact nuclear reactors—usually used to power naval warships and submarine
Submarine
A submarine is a watercraft capable of independent operation below the surface of the water. It differs from a submersible, which has more limited underwater capability...
s. Further processing can yield weapons-grade
Weapons-grade
A weapons-grade substance is one that is pure enough to be used to make a weapon or has properties that make it suitable for weapons use. Weapons-grade plutonium and uranium are the most common examples, but it may also be used to refer to chemical and biological weapons...
uranium with U-235 levels usually above 90%, suitable for nuclear weapon
Nuclear weapon
A nuclear weapon is an explosive device that derives its destructive force from nuclear reactions, either fission or a combination of fission and fusion. Both reactions release vast quantities of energy from relatively small amounts of matter. The first fission bomb test released the same amount...
s. However, since the collapse of the Soviet Union
Soviet Union
The Soviet Union , officially the Union of Soviet Socialist Republics , was a constitutionally socialist state that existed in Eurasia between 1922 and 1991....
, there is a worldwide surplus of highly-enriched uranium, and Russian HEU is diluted to LEU for power reactors
Megatons to Megawatts Program
The Megatons to Megawatts Program is the name given to the program that implemented the 1993 United States-Russia nonproliferation agreement to convert high-enriched uranium taken from dismantled Russian nuclear weapons into low-enriched-uranium for nuclear fuel.-Extent of program since 1995:From...
.

Yellowcake is produced by all countries in which uranium ore is mined.