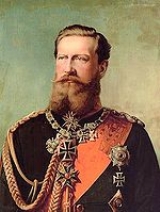 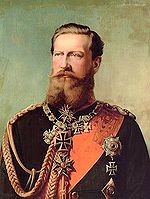 The Year of the Three Emperors, or the Year of the Three Kaisers, (German: Dreikaiserjahr) refers to the year 1888 during the German Empire
German Empire
The German Empire refers to Germany during the "Second Reich" period from the unification of Germany and proclamation of Wilhelm I as German Emperor on 18 January 1871, to 1918, when it became a federal republic after defeat in World War I and the abdication of the Emperor, Wilhelm II.The German...
in German history. The year is considered to have memorable significance because of the deaths of two German Emperors
German Emperor
This article is about the emperors of the German Empire. For full list of German monarchs before 1871, see List of German monarchs.The German Emperor was the official title of the Head of State and ruler of the German Empire, beginning with the proclamation of Wilhelm I as emperor during the...
, or Kaiser
Kaiser
Kaiser is the German title meaning "Emperor", with Kaiserin being the female equivalent, "Empress". Like the Russian Czar it is directly derived from the Latin Emperors' title of Caesar, which in turn is derived from the personal name of a branch of the gens Julia, to which Gaius Julius Caesar,...
s, leading to a rapid succession of three monarchs within one year. The three different emperors who ruled over Germany during this year were Wilhelm I, Frederick III
Frederick III, German Emperor
Frederick III was German Emperor and King of Prussia for 99 days in 1888, the Year of the Three Emperors. Friedrich Wilhelm Nikolaus Karl known informally as Fritz, was the only son of Emperor William I and was raised in his family's tradition of military service...
, and Wilhelm II. The mnemonic
Mnemonic
A mnemonic , or mnemonic device, is any learning technique that aids memory. To improve long term memory, mnemonic systems are used to make memorization easier. Commonly encountered mnemonics are often verbal, such as a very short poem or a special word used to help a person remember something,...
“drei Achten, drei Kaiser” (English: "three eights, three emperors") is still used today in Germany by children and adults alike to learn the year in question.

Wilhelm I had been the King of Prussia before the formation of a German Empire due largely to Bismarck
Otto von Bismarck
Otto Eduard Leopold, Prince of Bismarck, Duke of Lauenburg , simply known as Otto von Bismarck, was a Prussian-German statesman whose actions unified Germany, made it a major player in world affairs, and created a balance of power that kept Europe at peace after 1871.As Minister President of...
's efforts. As the monarch of the largest German state which had a key role in the unification, Emperor Wilhelm I had ruled over the German Empire ever since the unification of Germany
Unification of Germany
The formal unification of Germany into a politically and administratively integrated nation state officially occurred on 18 January 1871 at the Versailles Palace's Hall of Mirrors in France. Princes of the German states gathered there to proclaim Wilhelm of Prussia as Emperor Wilhelm of the German...
on 18 January 1871. He lived until he was almost 91 years old and reigned over Prussia for 27 years and over Germany for 17 years. His son, Crown Prince Frederick William, was celebrated for his military actions because of his leadership during the wars fought to unify Germany. Frederick commanded staffs and armies during the Second Schleswig War, the Austro-Prussian War
Austro-Prussian War
The Austro-Prussian War was a war fought in 1866 between the German Confederation under the leadership of the Austrian Empire and its German allies on one side and the Kingdom of Prussia with its German allies and Italy on the...
, and the Franco-Prussian War
Franco-Prussian War
The Franco-Prussian War or Franco-German War, often referred to in France as the 1870 War was a conflict between the Second French Empire and the Kingdom of Prussia. Prussia was aided by the North German Confederation, of which it was a member, and the South German states of Baden, Württemberg and...
. Crown Prince Frederick William had just turned 56 before the year 1888. Frederick also had a number of children at the time, and his heir was named Wilhelm, after his grandfather. Wilhelm had just turned 29 before 1888.

Early in the year, Emperor Wilhelm I died on 9 March 1888 after his long reign. He was then succeeded by his son, Frederick William. Frederick William became known as Frederick III when he assumed the throne. Along with his military successes, Frederick III was a reputed liberal and married to the United Kingdom's
United Kingdom of Great Britain and Ireland
The United Kingdom of Great Britain and Ireland was the formal name of the United Kingdom during the period when what is now the Republic of Ireland formed a part of it....
liberal Princess Royal
Princess Royal
Princess Royal is a style customarily awarded by a British monarch to his or her eldest daughter. The style is held for life, so a princess cannot be given the style during the lifetime of another Princess Royal...
Victoria
Victoria, Princess Royal
The Princess Victoria, Princess Royal was the eldest child of Queen Victoria of the United Kingdom and Prince Albert. She was created Princess Royal of the United Kingdom in 1841. She became German Empress and Queen of Prussia by marriage to German Emperor Frederick III...
. However, by the time of his father's death, Frederick was 56 years old and had already developed a terminal case of cancer of the larynx before he assumed the German imperial throne. Frederick attempted to have it treated, but it was not successful. Due to this illness and subsequent treatment, Frederick could not talk during his short reign and had to communicate through writing. Frederick still accomplished some of his duties as emperor despite his protracted illness; however, he did not have any lasting effect upon Germany. He died after only 99 days of rule on 15 June 1888. Frederick's son, Wilhelm II, then succeeded to the throne at age 29. Unlike his father, Wilhelm II did not have any liberal tendencies. Wilhelm II eventually led Germany into World War I
World War I
World War I , which was predominantly called the World War or the Great War from its occurrence until 1939, and the First World War or World War I thereafter, was a major war centred in Europe that began on 28 July 1914 and lasted until 11 November 1918...
and ruled until his abdication
Abdication
Abdication occurs when a monarch, such as a king or emperor, renounces his office.-Terminology:The word abdication comes derives from the Latin abdicatio. meaning to disown or renounce...
and the fall of the German Empire in 1918 at the end of war.