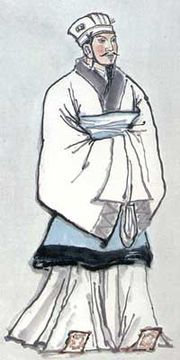 Xú Fú ( (not to be confused with the character 市); was born in 255 BC in Qi
Qi (state)
Qi was a powerful state during the Spring and Autumn Period and Period of the Warring States in ancient China. Its capital was Linzi, now part of the modern day city of Zibo in Shandong Province....
, and served as a court sorcerer in Qin Dynasty China
Qin Dynasty
The Qin Dynasty was the first imperial dynasty of China, lasting from 221 to 207 BC. The Qin state derived its name from its heartland of Qin, in modern-day Shaanxi. The strength of the Qin state was greatly increased by the legalist reforms of Shang Yang in the 4th century BC, during the Warring...
. He was sent by Qin Shi Huang
Qin Shi Huang
Qin Shi Huang , personal name Ying Zheng , was king of the Chinese State of Qin from 246 BC to 221 BC during the Warring States Period. He became the first emperor of a unified China in 221 BC...
to the eastern seas twice to look for the elixir of life. His two journeys occurred between 219 BC and 210 BC. It was believed that the fleet included 60 barque
Barque
A barque, barc, or bark is a type of sailing vessel with three or more masts.- History of the term :The word barque appears to have come from the Greek word baris, a term for an Egyptian boat. This entered Latin as barca, which gave rise to the Italian barca, Spanish barco, and the French barge and...
s and around 5,000 crew members, 3,000 boys and girls, and craftsmen of different fields. After he embarked on a second mission in 210 BC, he never returned. Various records suggest that he may have arrived and died in Japan
Japan
Japan is an island nation in East Asia. Located in the Pacific Ocean, it lies to the east of the Sea of Japan, China, North Korea, South Korea and Russia, stretching from the Sea of Okhotsk in the north to the East China Sea and Taiwan in the south...
.

The ruler of Qin, Qin Shi Huang
Qin Shi Huang
Qin Shi Huang , personal name Ying Zheng , was king of the Chinese State of Qin from 246 BC to 221 BC during the Warring States Period. He became the first emperor of a unified China in 221 BC...
feared death and sought a way to live forever. He entrusted Xu Fu with the task of finding the secret of immortality
Immortality
Immortality is the ability to live forever. It is unknown whether human physical immortality is an achievable condition. Biological forms have inherent limitations which may or may not be able to be overcome through medical interventions or engineering...
. In 219 BC, Xu Fu was sent with three thousand virgin boys and girls to retrieve the elixir of life
Elixir of life
The elixir of life, also known as the elixir of immortality and sometimes equated with the philosopher's stone, is a legendary potion, or drink, that grants the drinker eternal life and or eternal youth. Many practitioners of alchemy pursued it. The elixir of life was also said to be able to create...
from the immortals on the Penglai Mountain
Penglai Mountain
Mount Penglai , or Penglai Island , is a mystical land found in Chinese mythology. The legend also passed into Japan, where it took shape as the legend of .-Location:...
, including Anqi Sheng
Anqi Sheng
Anqi Sheng was a legendary Chinese immortal, said to be already 1,000 years old at the time of Qin Shi Huang, the first emperor.He was said to inhabit Mount Penglai. Anqi appears to have been a magician, and possessed the power of rendering himself visible or invisible at pleasure...
, who was purportedly a magician who was already a thousand years old. Xu sailed for several years without finding the mountain. In 210 BC, when Qin Shi Huang questioned him, Xu Fu claimed there was a giant sea creature blocking the path, and asked for archers to kill the creature. Qin Shi Huang agreed, and sent archers to kill a giant fish. Xu then set sail again, but he never returned from this trip. The Records of the Grand Historian
Records of the Grand Historian
The Records of the Grand Historian, also known in English by the Chinese name Shiji , written from 109 BC to 91 BC, was the Magnum opus of Sima Qian, in which he recounted Chinese history from the time of the Yellow Emperor until his own time...
says he came to a place with "flat plains and wide swamps" (平原廣澤) and proclaimed himself king, never to return.
Later historical texts were also unclear on the location of Xu Fu's final destination. Sanguo Zhi, Book of Later Han
Book of Later Han
The Book of the Later Han or the History of the Later Han is one of the official Chinese historical works which was compiled by Fan Ye in the 5th century, using a number of earlier histories and documents as sources...
, and Guadi Zhi all state that he landed in "Danzhou" (亶州), but the whereabouts of Danzhou are unknown. Finally, more than 1,100 years after Xu Fu's final voyage, monk Yichu wrote during the Later Zhou Dynasty
Later Zhou Dynasty
The Later Zhou Dynasty was the last a succession of five dynasties that controlled most of northern China during the Five Dynasties and Ten Kingdoms Period, which lasted from 907 to 960 and bridged the gap between the Tang Dynasty and the Song Dynasty.-Founding of the Dynasty:Guo Wei, a Han...
(AD 951-960) of the Five Dynasties and Ten Kingdoms Period
Five Dynasties and Ten Kingdoms Period
Five Dynasties and Ten Kingdoms was between 907–960/979 AD and an era of political upheaval in China, between the fall of the Tang Dynasty and the founding of the Song Dynasty. During this period, five dynasties quickly succeeded one another in the north, and more than 12 independent states were...
that Xu Fu landed in Japan
Japan
Japan is an island nation in East Asia. Located in the Pacific Ocean, it lies to the east of the Sea of Japan, China, North Korea, South Korea and Russia, stretching from the Sea of Okhotsk in the north to the East China Sea and Taiwan in the south...
, and also said Xu Fu named Mount Fuji
Mount Fuji
is the highest mountain in Japan at . An active stratovolcano that last erupted in 1707–08, Mount Fuji lies about south-west of Tokyo, and can be seen from there on a clear day. Mount Fuji's exceptionally symmetrical cone is a well-known symbol of Japan and it is frequently depicted in art and...
as Penglai. This is the "Legend of Xu Fu" in Japan as evidenced by the many memorials to him there. 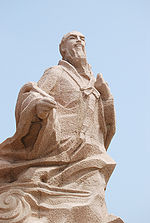 Those who support the theory that Xu Fu landed in Japan credit him with being the catalyst for the development of ancient Japanese society. The Jōmon culture
Jomon period
The is the time in Japanese prehistory from about 14,000 BC to 300 BC.The term jōmon means "cord-patterned" in Japanese. This refers to the pottery style characteristic of the Jōmon culture, and which has markings made using sticks with cords wrapped around them...
which had existed in ancient Japan for over 6000 years suddenly disappeared around 300 BC. The farming techniques and knowledge that Xu brought along are said to have improved the quality of life of the ancient Japanese people and he is said to have introduced many new plants and techniques to ancient Japan. To these achievements is attributed the worship of Xu Fu as the "God of farming", "God of medicine" and "God of silk" by the Japanese. Numerous temples and memorials of Xu can be found in many places in Japan. In Xuzhou
Xuzhou
Xuzhou , otherwise known as Pengcheng in ancient times, is a major city in and the fourth largest prefecture-level city of Jiangsu province, People's Republic of China...
, near Yangzhou
Yangzhou
Yangzhou is a prefecture-level city in central Jiangsu Province, People's Republic of China. Sitting on the northern bank of the Yangtze River, it borders the provincial capital of Nanjing to the southwest, Huai'an to the north, Yancheng to the northeast, Taizhou to the east, and Zhenjiang across...
, there is a Xu Fu Research Institute attached to Xuzhou Teachers College.