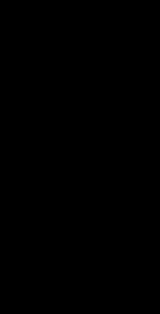 The term jōmon means "cord-patterned" in Japanese. This refers to the pottery style characteristic of the Jōmon culture, and which has markings made using sticks with cords wrapped around them. Recent Y-DNA haplotype
Haplotype
A haplotype in genetics is a combination of alleles at adjacent locations on the chromosome that are transmitted together...
testing has found that the Jōmon are the genetic ancestors of the Ainu
Ainu people
The , also called Aynu, Aino , and in historical texts Ezo , are indigenous people or groups in Japan and Russia. Historically they spoke the Ainu language and related varieties and lived in Hokkaidō, the Kuril Islands, and much of Sakhalin...
and partly of some modern Japanese people
Japanese people
The are an ethnic group originating in the Japanese archipelago and are the predominant ethnic group of Japan. Worldwide, approximately 130 million people are of Japanese descent; of these, approximately 127 million are residents of Japan. People of Japanese ancestry who live in other countries...
.

The Japanese are considered today to be descended from a mixture of the ancient hunter-gatherer Jōmon culture and the later rice agriculture Yayoi culture
Yayoi period
The is an Iron Age era in the history of Japan traditionally dated 300 BC to 300 AD. It is named after the neighbourhood of Tokyo where archaeologists first uncovered artifacts and features from that era. Distinguishing characteristics of the Yayoi period include the appearance of new...
. These two major ancestral groups came to Japan over different routes at different times.
The Jōmon ancestors were an Ice Age culture that may have come to the Northern and Southern Japanese archipelago around 20,000 BC, when there was an ice bridge connecting Siberia and Northern Japan. The Yayoi people are thought to have arrived about 1000 BC from china 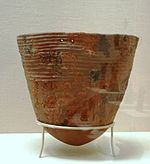 According to archaeological evidence, the Jōmon people created some of the oldest known pottery
Pottery
Pottery is the material from which the potteryware is made, of which major types include earthenware, stoneware and porcelain. The place where such wares are made is also called a pottery . Pottery also refers to the art or craft of the potter or the manufacture of pottery...
vessels in the world, known as Jōmon Pottery
Jomon Pottery
The is a type of ancient pottery which was made during the Jōmon period in Japan. The term "Jōmon" means "rope-patterned" in Japanese, describing the patterns that are pressed into the clay.- Oldest Pottery in the World :...
, dated to the 14th century BC
14th century BC
The 14th century BC is a century which lasted from the year 1400 BC until 1301 BC.-Events:* 1397 BC: Pandion I, legendary King of Athens, dies after a reign of 40 years and is succeeded by his son Erechtheus II of Athens....
. The antiquity of this pottery was first identified after the Second World War
World War II
World War II, or the Second World War , was a global conflict lasting from 1939 to 1945, involving most of the world's nations—including all of the great powers—eventually forming two opposing military alliances: the Allies and the Axis...
, through radiocarbon dating
Radiocarbon dating
Radiocarbon dating is a radiometric dating method that uses the naturally occurring radioisotope carbon-14 to estimate the age of carbon-bearing materials up to about 58,000 to 62,000 years. Raw, i.e. uncalibrated, radiocarbon ages are usually reported in radiocarbon years "Before Present" ,...
methods.

Archaeologist Junko Habu claims that "The majority of Japanese scholars believed, and still believe, that pottery production was first invented in mainland Asia and subsequently introduced into the Japanese archipelago," and explains that "A series of excavations in the Amur River Basin in the 1980s and 1990s revealed that pottery in this region may be as old as, if not older than, Fukui Cave pottery".

The Jōmon era pottery was called "Jōmon doki", the first word meaning "rope pattern" and indicating the decoration on most Jōmon earthenware that resembles designs made by rope. The pots were mostly used to eat out of or store food. The Jōmon people also made clay figures and vessels decorated with patterns of a growing sophistication made by impressing the wet clay with braided or unbraided cord and sticks.

The manufacturing of pottery typically implies some form of sedentary life
Sedentism
In evolutionary anthropology and archaeology, sedentism , is a term applied to the transition from nomadic to permanent, year-round settlement.- Requirements for permanent settlements :...
due to the fact that pottery is highly breakable and thus generally useless to hunter-gatherer
Hunter-gatherer
A hunter-gatherer or forage society is one in which most or all food is obtained from wild plants and animals, in contrast to agricultural societies which rely mainly on domesticated species. Hunting and gathering was the ancestral subsistence mode of Homo, and all modern humans were...
s who are constantly on the move. The Jōmon people were therefore probably some of the earliest sedentary or at least semi-sedentary people in the world. They used chipped stone tools, ground stone
Ground stone
In archaeology, ground stone is a category of stone tool formed by the grinding of a coarse-grained tool stone, either purposely or incidentally. Ground stone tools are usually made of basalt, rhyolite, granite, or other macrocrystalline igneous stones whose coarse structure makes them ideal for...
tools, traps, and bows
Bow (weapon)
The bow and arrow is a projectile weapon system that predates recorded history and is common to most cultures.-Description:A bow is a flexible arc that shoots aerodynamic projectiles by means of elastic energy. Essentially, the bow is a form of spring powered by a string or cord...
, and were probably semi-sedentary hunters-gatherers and skillful coastal and deep-water fishermen. They practiced a rudimentary form of agriculture
Agriculture
Agriculture is the cultivation of animals, plants, fungi and other life forms for food, fiber, and other products used to sustain life. Agriculture was the key implement in the rise of sedentary human civilization, whereby farming of domesticated species created food surpluses that nurtured the...
and lived in caves and later in groups of either shallow pit dwellings or above-ground houses, leaving rich midden
Midden
A midden, is an old dump for domestic waste which may consist of animal bone, human excrement, botanical material, vermin, shells, sherds, lithics , and other artifacts and ecofacts associated with past human occupation...
s for modern archaeological study.

This semi-sedentary culture led to important population increases, so that the Jōmon exhibit some of the highest densities known for foraging populations. Genetic mapping studies by Cavalli-Sforza have shown a pattern of genetic expansion from the area of the Sea of Japan
Sea of Japan
The Sea of Japan is a marginal sea of the western Pacific Ocean, between the Asian mainland, the Japanese archipelago and Sakhalin. It is bordered by Japan, North Korea, Russia and South Korea. Like the Mediterranean Sea, it has almost no tides due to its nearly complete enclosure from the Pacific...
towards the rest of eastern Asia. This appears as the third most important genetic movement in Eastern Asia (after the "Great expansion" from the African continent, and a second expansion from the area of Northern Siberia), which suggests geographical expansion during the early Jōmon period. These studies also suggest that the Jōmon demographic expansion may have reached America along a path following the Pacific coast. 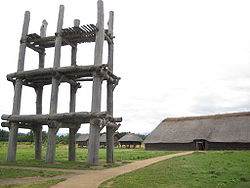 The Early and Middle Jōmon periods saw an explosion in population, as indicated by the number of settlements from this period. These two periods occurred during the prehistoric Holocene Climatic Optimum
Holocene climatic optimum
The Holocene Climate Optimum was a warm period during roughly the interval 9,000 to 5,000 years B.P.. This event has also been known by many other names, including: Hypsithermal, Altithermal, Climatic Optimum, Holocene Optimum, Holocene Thermal Maximum, and Holocene Megathermal.This warm period...
(between 4000 BC and 2000 BC), when temperatures reached several degrees Celsius higher than the present, and mean sea level
Sea level
Mean sea level is a measure of the average height of the ocean's surface ; used as a standard in reckoning land elevation...
was higher by 5 to 6 metres. Beautiful artistic realisations, such as highly decorated "flamed" vessels, remain from that time. After 1500 BC, the climate
Climate
Climate encompasses the statistics of temperature, humidity, atmospheric pressure, wind, rainfall, atmospheric particle count and other meteorological elemental measurements in a given region over long periods...
cooled, and populations seem to have contracted dramatically. Comparatively few archaeological sites can be found after 1500 BC.

The Early Jōmon is the first stage in the Jomon era of Japanese pre-history
History of Japan
The history of Japan encompasses the history of the islands of Japan and the Japanese people, spanning the ancient history of the region to the modern history of Japan as a nation state. Following the last ice age, around 12,000 BC, the rich ecosystem of the Japanese Archipelago fostered human...
. The Jomon period itself ranged from 10,000 to 300 BC, with the first stage lasting from 4000 to 3000 BC. The Early Jomon is characterized by the high sea level (2 to 3 meters higher than the modern day) and a significant population increase. This period saw a rise in complexity in the design of pit houses, the most commonly used method of housing at the time.

By the end of the Jōmon period, a slow shift had taken place according to archaeological studies. New arrivals from the continent seem to have invaded Japan from the West, bringing with them new technologies such as rice farming and metallurgy. The settlements of the new arrivals seem to have coexisted with those of the Jōmon for some time. Under these influences, the incipient cultivation of the Jōmon evolved into sophisticated rice-paddy
Paddy field
A paddy field is a flooded parcel of arable land used for growing rice and other semiaquatic crops. Paddy fields are a typical feature of rice farming in east, south and southeast Asia. Paddies can be built into steep hillsides as terraces and adjacent to depressed or steeply sloped features such...
farming. Many other elements of Japanese culture also may date from this period and reflect a mingled migration from the northern Asian continent and the southern Pacific areas. Among these elements are Shinto
Shinto
or Shintoism, also kami-no-michi, is the indigenous spirituality of Japan and the Japanese people. It is a set of practices, to be carried out diligently, to establish a connection between present day Japan and its ancient past. Shinto practices were first recorded and codified in the written...
religion, marriage customs, architectural styles, and technological developments such as lacquerware
Lacquerware
Lacquerware are objects decoratively covered with lacquer. The lacquer is sometimes inlaid or carved. Lacquerware includes boxes, tableware, buttons and even coffins painted with lacquer in cultures mostly in the Eastern Hemisphere.-History:...
, textiles, laminated bow
Laminated bow
A laminated bow is an archery bow in which different materials are laminated together to form the bow stave itself. Traditional composite bows are normally not included, although their construction with horn, wood, and sinew might bring them within the above definition. This term usually refers to...
s, metalworking, and glass making. The Jōmon is succeeded by the Yayoi period outside Hokkaido, where the Jōmon is succeeded by the Zoku-Jōmon (post-Jōmon) period. The Zoku-Jōmon culture is succeeded by the Satsumon culture
Satsumon culture
The is a post-Jomon partially agricultural archeological culture of northern Honshu and southern Hokkaido that has been identified as the Emishi, as a Japanese-Emishi mixed culture, as the incipient modern Ainu, or with all three synonymously. It may have arisen as a merger of the Yayoi–Kofun and...
around the 7th century.