Encyclopedia
The Wright brothers
Wright brothers
The Wright brothers, Orville and Wilbur , were two Americans credited with inventing and building the world's first successful airplane and making the first controlled, powered and sustained heavier-than-air human flight, on December 17, 1903...
designed, built and flew a series of three manned gliders in 1900-1902 as they worked towards achieving powered flight
Flight
Flight is the process by which an object moves either through an atmosphere or beyond it by generating lift or propulsive thrust, or aerostatically using buoyancy, or by simple ballistic movement....
. They also made preliminary tests with a kite
Kite
A kite is a tethered aircraft. The necessary lift that makes the kite wing fly is generated when air flows over and under the kite's wing, producing low pressure above the wing and high pressure below it. This deflection also generates horizontal drag along the direction of the wind...
in 1899. In 1911 Orville conducted tests with a much more sophisticated glider. Neither the kite nor any of the gliders was preserved, but replicas of all have been built.

The 1899 kite, which Wilbur flew near his home in Dayton
Dayton
Dayton is a city in Ohio and the county seat of Montgomery County, Ohio, United States.Dayton may also refer to:-United States:*Dayton, Alabama*Dayton, California, in Butte County*Dayton, Lassen County, California*Dayton, Idaho*Dayton, Indiana...
, Ohio had a wingspan of only 5 feet (1.5 m). This pine wood and shellacked craft, although too small to carry a pilot, tested the concept of wing-warping for roll control
Flight dynamics
Flight dynamics is the science of air vehicle orientation and control in three dimensions. The three critical flight dynamics parameters are the angles of rotation in three dimensions about the vehicle's center of mass, known as pitch, roll and yaw .Aerospace engineers develop control systems for...
that would prove essential to the brothers' solving the problem of controlled flight. The Wrights burned the craft along with other trash in 1905.

The 1900 Wright Glider was the brothers' first to be capable of carrying a man. Its overall structure was based on Octave Chanute
Octave Chanute
Octave Chanute was a French-born American railway engineer and aviation pioneer. He provided the Wright brothers with help and advice, and helped to publicize their flying experiments. At his death he was hailed as the father of aviation and the heavier-than-air flying machine...
's two-surface glider of 1896. Its wing airfoil
Airfoil
An airfoil or aerofoil is the shape of a wing or blade or sail as seen in cross-section....
was derived from Otto Lilienthal's
Otto Lilienthal
Otto Lilienthal was a German pioneer of human aviation who became known as the Glider King. He was the first person to make well-documented, repeated, successful gliding flights. He followed an experimental approach established earlier by Sir George Cayley...
published tables of aerodynamic lift. The glider was designed with wing warping capability for full-size testing of the concept first tried on the 1899 Wright Kite.

The glider was first flown as an unmanned kite on October 5, 1900 near Kitty Hawk
Kitty Hawk
Kitty Hawk or Kittyhawk may refer to:Places*Kitty Hawk, North Carolina*Kitty Hawk, is an area of Wright-Patterson Air Force Base*Kitty Hawk Air Society, an Honor Society for the Air Force Junior Reserve Officers' Training Corps programAirlines...
, North Carolina. Next, Wilbur rode as pilot while men on the ground held tether ropes attached to the airborne craft. Subsequently, Wilbur made about a dozen free flights on a single day, concluding the season's test efforts. The brothers abandoned the glider and it eventually disappeared in the region's severe storms.

The 1901 Wright Glider was the second of the brothers' experimental gliders. They tested it over the Kill Devil Hills, four miles south of Kitty Hawk. The glider was similar to the 1900 version, but had larger wings. It first flew on July 27, 1901, and was retired on August 17. During this time it made between 50 and 100 free flights, in addition to tethered flights as a kite.

The wing ribs flexed under the weight of the pilot, distorting the airfoil shapes of the wings. The brothers fixed the trouble, but the wings still produced much less lift than expected, and wing-warping sometimes made the glider turn opposite the intended direction. After testing concluded, the brothers stored the glider in their camp shed. The shed and glider were badly damaged later by windstorms. The wing uprights were salvaged for the 1902 Glider, but the rest was abandoned.

As a result of lift and "drift" (drag) measurements taken with the tethered glider, the brothers concluded that Lilienthal's data were inaccurate. Upon returning to Dayton, they designed and built a small wind tunnel
Wind tunnel
A wind tunnel is a research tool used in aerodynamic research to study the effects of air moving past solid objects.-Theory of operation:Wind tunnels were first proposed as a means of studying vehicles in free flight...
to collect their own data. 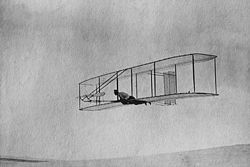 The 1902 Wright Glider was the third free-flight glider built by the brothers. This was their first glider to incorporate yaw control
Flight dynamics
Flight dynamics is the science of air vehicle orientation and control in three dimensions. The three critical flight dynamics parameters are the angles of rotation in three dimensions about the vehicle's center of mass, known as pitch, roll and yaw .Aerospace engineers develop control systems for...
by use of a rear rudder, and its design led directly to the powered 1903 Wright Flyer
Wright Flyer
The Wright Flyer was the first powered aircraft, designed and built by the Wright brothers. They flew it four times on December 17, 1903 near the Kill Devil Hills, about four miles south of Kitty Hawk, North Carolina, U.S.The U.S...
.

The brothers designed the 1902 glider during the winter of 1901-1902. The wing design was based on data from extensive tests of miniature airfoils in their homemade wind tunnel. They built the components of the glider in Dayton and completed assembly at their Kill Devil Hills camp in September 1902. Testing began on September 19. The new rear rudder improved turning control, but several times the pilot was unable to stop turning and collided with the ground. The brothers decided to make the rear rudder steerable to solve the problem. With this modification, they achieved true control and made between 700 and 1000 glides (as estimated by the brothers, who did not keep detailed records). The longest glide was measured and timed at 622.5 ft (189.7 m) in 26 seconds.

In 1903 they brought the 1902 glider out of storage and flew it again to hone their piloting skills while preparing the powered Flyer
Wright Flyer
The Wright Flyer was the first powered aircraft, designed and built by the Wright brothers. They flew it four times on December 17, 1903 near the Kill Devil Hills, about four miles south of Kitty Hawk, North Carolina, U.S.The U.S...
. One of their photographs shows they installed a second vertical fin as part of the steerable rear rudder, matching the original design and also that of the powered Flyer's twin rear rudder. After their successful powered flights, they put the glider back in storage at camp before returning home for Christmas. When they next visited Kitty Hawk in 1908 to test their improved Flyer III
Wright Flyer III
The Wright Flyer III was the third powered aircraft built by the Wright Brothers. Orville Wright made the first flight with it on June 23, 1905. The Flyer III had an airframe of spruce construction with a wing camber of 1-in-20 as used in 1903, rather than the less effective 1-in-25 used in 1904...
, Outer Banks
Outer Banks
The Outer Banks is a 200-mile long string of narrow barrier islands off the coast of North Carolina, beginning in the southeastern corner of Virginia Beach on the east coast of the United States....
weather had taken its toll: the storage shed and glider inside were wrecked. 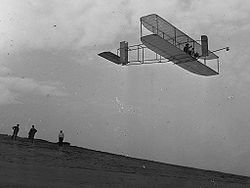 In 1911 Orville Wright returned to the Kill Devil Hills with a new glider, accompanied by his English friend Alec Ogilvie. Orville intended to test an automatic control system on the glider, but did not because of the presence of reporters (he eventually perfected the system in a powered airplane in 1913). The glider had what is now considered a 'conventional tailplane' rather than the front mounted elevator
Canard (aeronautics)
In aeronautics, canard is an airframe configuration of fixed-wing aircraft in which the forward surface is smaller than the rearward, the former being known as the "canard", while the latter is the main wing...
. The pilot also was seated with hand controls, rather than lying prone in a cradle, as with the original gliders. In a 65 km/h(40 mph) wind on October 24, 1911, Orville soared above Kill Devil Hill for 9 minutes 45 seconds, breaking the brothers' previous record of 1 minute 12 seconds set in 1903 with the 1902 glider. The new record stood for ten years, until broken in Germany.

A number of replicas of the gliders exist. Wright brothers historian Rick Young of Richmond, Virginia
Richmond, Virginia
Richmond is the capital of the Commonwealth of Virginia, in the United States. It is an independent city and not part of any county. Richmond is the center of the Richmond Metropolitan Statistical Area and the Greater Richmond area...
has built 9 accurate working replicas of all of the Wright gliders and the 1903 Flyer. Young's 1902 gliders have appeared in numerous films and television documentaries, including a 1986 IMAX
IMAX
IMAX is a motion picture film format and a set of proprietary cinema projection standards created by the Canadian company IMAX Corporation. IMAX has the capacity to record and display images of far greater size and resolution than conventional film systems...
film On the Wing
On the Wing (1986 film)
On the Wing is a 1986 IMAX film featuring a half-sized robotic Quetzalcoatlus that demonstrates principles of animal flight.The film is narrated by F. Murray Abraham....
. One of his 1902 replicas is on display at the Smithsonian National Air and Space Museum's Wright Brothers gallery. The Virginia Aviation Museum
Virginia Aviation Museum
The Virginia Aviation Museum is an aviation museum in Richmond, Virginia, adjacent to Richmond International Airport . The museum houses a collection of some thirty four airframes, both owned and on-loan, ranging from reproductions of Wright Brothers kite gliders to the still state-of-the-art SR-71...
at Richmond International Airport is home to the Wright 1899 Kite, the 1900, 1901 and 1902 gliders and the 1903 Flyer, all built by Young.

A team led by Nick Engler of the Wright Brothers Aeroplane Company has also built replicas of all three gliders.