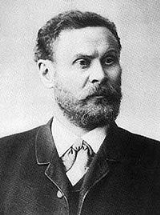 Encyclopedia
Otto Lilienthal was a German pioneer of human aviation
Aviation
Aviation is the design, development, production, operation, and use of aircraft, especially heavier-than-air aircraft. Aviation is derived from avis, the Latin word for bird.-History:...
who became known as the Glider King. He was the first person to make well-documented, repeated, successful gliding flights. He followed an experimental approach established earlier by Sir George Cayley
George Cayley
Sir George Cayley, 6th Baronet was a prolific English engineer and one of the most important people in the history of aeronautics. Many consider him the first true scientific aerial investigator and the first person to understand the underlying principles and forces of flight...
. Newspapers and magazines published photographs of Lilienthal gliding, favorably influencing public and scientific opinion about the possibility of flying machines becoming practical.

Lilienthal was born in Anklam
Anklam
Anklam is a town in the Western Pomerania region of Mecklenburg-Vorpommern, Germany. It is situated on the banks of the Peene river, just 8 km from its mouth in the Kleines Haff, the western part of the Stettin Lagoon. Anklam has a population of 14,603 and was the capital of the former...
, Pomerania Province, Prussia
Prussia
Prussia was a German kingdom and historic state originating out of the Duchy of Prussia and the Margraviate of Brandenburg. For centuries, the House of Hohenzollern ruled Prussia, successfully expanding its size by way of an unusually well-organized and effective army. Prussia shaped the history...
to a family of Swedish origin. He attended the grammar school in Anklam, and also studied the flight of birds with his brother Gustav (1849–1933), fascinated by the idea of manned flight. Lilienthal and his brother made strap-on wings, but failed in their attempts to fly. He then attended the regional technical school in Potsdam
Potsdam
Potsdam is the capital city of the German federal state of Brandenburg and part of the Berlin/Brandenburg Metropolitan Region. It is situated on the River Havel, southwest of Berlin city centre....
for two years and trained at the Schwarzkopf Company before becoming a professional design engineer. He would later attend the Royal Technical Academy in Berlin.

In 1867 he began his experiments on the force of air in earnest, interrupted when he volunteered to serve in the Franco-Prussian War
Franco-Prussian War
The Franco-Prussian War or Franco-German War, often referred to in France as the 1870 War was a conflict between the Second French Empire and the Kingdom of Prussia. Prussia was aided by the North German Confederation, of which it was a member, and the South German states of Baden, Württemberg and...
. As a staff engineer in various engineering companies, he received his first patent for a mining machine. He married Agnes Fischer, daughter of a deputy in 1878. Five years later, he founded his own company to make boilers and steam engines. Lilienthal published his famous book Birdflight as the Basis of Aviation in 1889.

Lilienthal's greatest contribution was in the development of heavier-than-air flight. He made his flights from an artificial hill he built near Berlin
Berlin
Berlin is the capital city of Germany and is one of the 16 states of Germany. With a population of 3.45 million people, Berlin is Germany's largest city. It is the second most populous city proper and the seventh most populous urban area in the European Union...
and from natural hills, especially in the Rhinow
Rhinow
Rhinow is a town in the Havelland district , in Brandenburg, Germany. It is situated 16 km north of Rathenow, and 22 km south of Kyritz. Rhinow is the administrative seat of the Rhinow district .- Geography :...
region.

A sketch toward a second hang glider in about 1891 involved a triangle control frame with a complex basebar that would lead to lower double kingposts while the apex of the triangle would serve as a single kingpost; his filing of a U.S. Patent in 1894 directed pilots to grip the "bar" for carrying and flying the hang glider. The A-frame of Percy Pilcher
Percy Pilcher
Percy Sinclair Pilcher was a British inventor and pioneer aviator who was his country's foremost experimenter in unpowered flight at the end of the 19th Century...
and Otto Lilienthal echoes in today's control frame for hang gliders and ultralight trike aircraft. Working in conjunction with his brother Gustav, he made over 2,000 flights in gliders of his design starting in 1891 with his first glider version, the Derwitzer, until his death in a gliding crash in 1896.

He could use the updraft of a 10 m/s wind against a hill to remain stationary with respect to the ground, shouting to a photographer on the ground to manoeuvre into the best position for a photo.

Lilienthal did research in accurately describing the flight of birds, especially stork
Stork
Storks are large, long-legged, long-necked wading birds with long, stout bills. They belong to the family Ciconiidae. They are the only family in the biological order Ciconiiformes, which was once much larger and held a number of families....
s, and used polar diagrams
Polar curve (aviation)
A polar curve is a graph which contrasts the sink rate of an aircraft with its horizontal speed.-Measuring a glider's performance:...
for describing the aerodynamics
Aerodynamics
Aerodynamics is a branch of dynamics concerned with studying the motion of air, particularly when it interacts with a moving object. Aerodynamics is a subfield of fluid dynamics and gas dynamics, with much theory shared between them. Aerodynamics is often used synonymously with gas dynamics, with...
of their wings. He made many experiments in an attempt to gather reliable aeronautical data.

His gliders were controlled by changing the centre of gravity by shifting his body, much like modern hang gliders. However they were difficult to maneuvre and had a tendency to pitch down, from which it was difficult to recover. One reason for this was that he held the glider by his shoulders, rather than hanging from it like a modern hang glider. Only his legs and lower body could be moved, which limited the amount of weight shift he could achieve.

Lilienthal made many attempts to improve stability with varying degrees of success. These included making a biplane which halved the wing span for a given wing area, and by having a hinged tail-plane that could move upwards to make the flare at the end of a flight easier. He speculated that flapping wings of birds might be necessary and had begun work on such a powered aircraft.

While his lifelong pursuit was flight, he was also an inventor and devised a small engine that worked on a system of tubular boilers. His engine was much safer than the other small engines of the time. This invention gave him the financial freedom to focus on aviation
Aviation
Aviation is the design, development, production, operation, and use of aircraft, especially heavier-than-air aircraft. Aviation is derived from avis, the Latin word for bird.-History:...
. His brother Gustav (1849–1933) was living in Australia
Australia
Australia , officially the Commonwealth of Australia, is a country in the Southern Hemisphere comprising the mainland of the Australian continent, the island of Tasmania, and numerous smaller islands in the Indian and Pacific Oceans. It is the world's sixth-largest country by total area...
at the time, and Lilienthal did not engage in aviation experiments until his brother's return in 1885.

Reports of Lilienthal's flights spread in Germany and elsewhere, with photographs appearing in scientific and popular publications. Among the those who photographed him were pioneers
History of photography
The first permanent photograph was an image produced in 1826 by the French inventor Joseph Nicéphore Niépce.- Etymology :The word photography derives from the Greek words phōs light, and gráphein, to write...
such as Ottomar Anschütz
Ottomar Anschütz
Ottomar Anschütz was an inventor, photographer, and chronophotographer.-Biography:He invented 1/1000 of a second shutter, and the "electrotachyscope" in 1887...
and American physicist
Physicist
A physicist is a scientist who studies or practices physics. Physicists study a wide range of physical phenomena in many branches of physics spanning all length scales: from sub-atomic particles of which all ordinary matter is made to the behavior of the material Universe as a whole...
Robert Williams Wood. He soon became known as the 'father of flight' as he had successfully controlled a heavier than air aircraft in sustained flight.

Lilienthal was a member of the Verein zur Förderung der Luftschifffahrt
Verein zur Förderung der Luftschifffahrt
Founded on 1881-08-31, the Deutsche Verein zur Förderung der Luftschifffahrt was the first German aviation association.- Founding :The motivation for the association arose from the experience of the massive French military balloon units during the Siege of Paris in the Franco-Prussian War of...
, and regularly detailed his experiences in articles in its journal, the Zeitschrift für Luftschifffahrt und Physik der Atmosphäre, and in the popular weekly publication Prometheus. These were translated in the United States, France and Russia. Many people from around the world came to visit him, including Samuel Pierpont Langley
Samuel Pierpont Langley
Samuel Pierpont Langley was an American astronomer, physicist, inventor of the bolometer and pioneer of aviation...
from the United States, Russian Nikolai Zhukovsky, Englishman Percy Pilcher
Percy Pilcher
Percy Sinclair Pilcher was a British inventor and pioneer aviator who was his country's foremost experimenter in unpowered flight at the end of the 19th Century...
and Austrian Wilhelm Kress
Wilhelm Kress
Wilhelm Kress was a pioneer in aviations and constructor of aircraft.-Life:Kress came to Vienna in 1873, where he developed the first modern delta-flying hang glider in 1877...
. Zhukovsky wrote that Lilienthal's flying machine was the most important invention in the aviation field. Lilienthal corresponded with many people, among them Octave Chanute
Octave Chanute
Octave Chanute was a French-born American railway engineer and aviation pioneer. He provided the Wright brothers with help and advice, and helped to publicize their flying experiments. At his death he was hailed as the father of aviation and the heavier-than-air flying machine...
, James Means, Alois Wolfmüller and other flight pioneers.

During a flight on 9 August 1896, Lilienthal's glider stalled
Stall (flight)
In fluid dynamics, a stall is a reduction in the lift coefficient generated by a foil as angle of attack increases. This occurs when the critical angle of attack of the foil is exceeded...
and he fell from a height of 17 m (56 ft), breaking his spine. He died in Berlin
Berlin
Berlin is the capital city of Germany and is one of the 16 states of Germany. With a population of 3.45 million people, Berlin is Germany's largest city. It is the second most populous city proper and the seventh most populous urban area in the European Union...
the following day. He was buried at Lankwitz Cemetery in Berlin.

Lilienthal's research was well known to the Wright brothers
Wright brothers
The Wright brothers, Orville and Wilbur , were two Americans credited with inventing and building the world's first successful airplane and making the first controlled, powered and sustained heavier-than-air human flight, on December 17, 1903...
, and they credited him as a major inspiration for their decision to pursue manned flight. However, they abandoned his aeronautical data after two seasons of gliding and began using their own wind tunnel data. 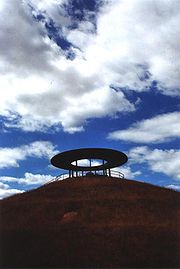 In September 1909 Orville Wright was in Germany making demonstration flights at Tempelhof aerodrome. He paid a call to Lilienthal's widow and on behalf of himself and Wilbur paid tribute to Lilienthal for his influence in aviation and on their own initial experiments in 1899.