The early aircraft Santos-Dumont 14-bis
Santos-Dumont 14-bis
The 14-bis , also known as , was a pioneer-era canard biplane designed and built by Brazilian inventor Alberto Santos-Dumont...
of 1906, reminded the French public of a flying duck with its shape - no tail and small control surfaces in the front. Thus the term became part of the English language.

Unlike a conventional tailplane
Tailplane
A tailplane, also known as horizontal stabilizer , is a small lifting surface located on the tail behind the main lifting surfaces of a fixed-wing aircraft as well as other non-fixed wing aircraft such as helicopters and gyroplanes...
, in order to achieve longitudinal stability a canard surface is trimmed to increase lift
Lift (force)
A fluid flowing past the surface of a body exerts a surface force on it. Lift is the component of this force that is perpendicular to the oncoming flow direction. It contrasts with the drag force, which is the component of the surface force parallel to the flow direction...
as speed increases. This equates to a negative coefficient for trim drag.

A canard design tends to be less controllable than a conventional design because aileron
Aileron
Ailerons are hinged flight control surfaces attached to the trailing edge of the wing of a fixed-wing aircraft. The ailerons are used to control the aircraft in roll, which results in a change in heading due to the tilting of the lift vector...
s on the main wing may be subject to turbulence from the canards that varies widely at different angle of attack
Angle of attack
Angle of attack is a term used in fluid dynamics to describe the angle between a reference line on a lifting body and the vector representing the relative motion between the lifting body and the fluid through which it is moving...
, leading to conditions of deep stall. If the ailerons were located on the canards, the lever arm would be too short due to the narrow span, and also the twisting motion would be too far forwards of the center of mass
Center of mass
In physics, the center of mass or barycenter of a system is the average location of all of its mass. In the case of a rigid body, the position of the center of mass is fixed in relation to the body...
.

Canards have poor stealth
Stealth aircraft
Stealth aircraft are aircraft that use stealth technology to avoid detection by employing a combination of features to interfere with radar as well as reduce visibility in the infrared, visual, audio, and radio frequency spectrum. Development of stealth technology likely began in Germany during...
characteristics because they present large, angular surfaces that tend to reflect radar
Radar
Radar is an object-detection system which uses radio waves to determine the range, altitude, direction, or speed of objects. It can be used to detect aircraft, ships, spacecraft, guided missiles, motor vehicles, weather formations, and terrain. The radar dish or antenna transmits pulses of radio...
signals. The Eurofighter Typhoon
Eurofighter Typhoon
The Eurofighter Typhoon is a twin-engine, canard-delta wing, multirole combat aircraft, designed and built by a consortium of three companies: EADS, Alenia Aeronautica and BAE Systems; working through a holding company, Eurofighter GmbH, which was formed in 1986...
uses software control of its canards in order to reduce its radar cross section
Radar cross section
Radar cross section is a measure of how detectable an object is with a radar. A larger RCS indicates that an object is more easily detected.An object reflects a limited amount of radar energy...
.

Canard designs fall into two main classes: the lifting-canard and the control-canard.

Other classes include the close-coupled type and active vibration damping. 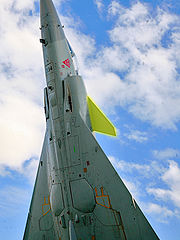 In this configuration, the weight of the aircraft is shared between the main wing and the canard wing. It may be described as an extreme conventional configuration with the following features:

a small highly-loaded wing
the c.g. significantly aft, at 500% chord
a relatively big lifting tail to give enough stability with this extreme aft c.g

The pros and cons of the canard versus conventional configurations are numerous and complex, and it is impossible to say which is superior without considering a specific design application.

For example, a lifting-canard generates an upload, in contrast to a conventional aft-tail which typically generates a downward lift force that must be counteracted by extra lift on the main wing, which may appear to unambiguously favor the canard. However, the downwash
Downwash
In aeronautics downwash is the air forced down by the aerodynamic action of a wing or helicopter rotor blade in motion, as part of the process of producing lift....
interaction between the two surfaces is unfavorable for the canard, and favorable for the conventional tail, so the difference in overall induced drag
Lift-induced drag
In aerodynamics, lift-induced drag, induced drag, vortex drag, or sometimes drag due to lift, is a drag force that occurs whenever a moving object redirects the airflow coming at it. This drag force occurs in airplanes due to wings or a lifting body redirecting air to cause lift and also in cars...
is actually not obvious, and depends on the details of the configuration.

In any case, pitch stability requires that the lift slope of the canard wing is lower than the lift slope of the main wing : to achieve stability, the change in lift coefficient with angle of attack should be less than that for the main plane.. The first powered airplane to fly, the Wright Flyer
Wright Flyer
The Wright Flyer was the first powered aircraft, designed and built by the Wright brothers. They flew it four times on December 17, 1903 near the Kill Devil Hills, about four miles south of Kitty Hawk, North Carolina, U.S.The U.S...
, a lifting-canard, was pitch unstable. Following Wright Flyers had some ballast to the nose.

In the later control-canard, most of the weight of the aircraft is carried by the main wing and the canard wing is used primarily for longitudinal control during maneuvering. Thus, a control-canard mostly operates only as a control surface and is usually at zero angle of attack
Angle of attack
Angle of attack is a term used in fluid dynamics to describe the angle between a reference line on a lifting body and the vector representing the relative motion between the lifting body and the fluid through which it is moving...
, carrying no aircraft weight in normal flight. Combat aircraft of canard configuration typically have a control-canard. In combat aircraft, the canard is usually driven by a computerized flight control system
Aircraft flight control systems
A conventional fixed-wing aircraft flight control system consists of flight control surfaces, the respective cockpit controls, connecting linkages, and the necessary operating mechanisms to control an aircraft's direction in flight...
.

One benefit obtainable from a control-canard is avoidance of pitch-up
Pitch-up
In aerodynamics, pitch-up is a severe form of stall in an aircraft. It is directly related to inherent properties of all swept wings.-History:Pitch-up problems were first noticed on high-speed test aircraft with swept wings...
. An all-moving canard capable of a significant nose-down deflection will protect against pitch-up. As a result, the aspect ratio
Aspect ratio
The aspect ratio of a shape is the ratio of its longer dimension to its shorter dimension. It may be applied to two characteristic dimensions of a three-dimensional shape, such as the ratio of the longest and shortest axis, or for symmetrical objects that are described by just two measurements,...
and wing-sweep of the main wing can be optimized without having to guard against pitch-up.

In the close-coupled canard, the foreplane is located just above and forward of the main wing. At high angles of attack the canard surface directs airflow downwards over the wing, reducing turbulence which results in reduced drag and increased lift.

The canard foreplane may be fixed as on the IAI Kfir
IAI Kfir
The Israel Aircraft Industries Kfir is an Israeli-built all-weather, multirole combat aircraft based on a modified Dassault Mirage 5 airframe, with Israeli avionics and an Israeli-made version of the General Electric J79 turbojet engine.-Background:...
, or have landing flaps as on the Saab Viggen, or it may be moveable and also act as a control-canard during normal flight as on the Dassault Rafale.

A close-coupled canard is very useful for a supersonic delta wing
Delta wing
The delta wing is a wing planform in the form of a triangle. It is named for its similarity in shape to the Greek uppercase letter delta .-Delta-shaped stabilizers:...
design which gains lift in both transonic
Transonic
Transonic speed is an aeronautics term referring to the condition of flight in which a range of velocities of airflow exist surrounding and flowing past an air vehicle or an airfoil that are concurrently below, at, and above the speed of sound in the range of Mach 0.8 to 1.2, i.e. 600–900 mph...
flight (such as for supercruise
Supercruise
Supercruise is sustained supersonic flight of an aircraft with a useful cargo, passenger, or weapons load performed efficiently and without the use of afterburners ....
) and also in low speed flight (such as take offs and landings).

A moustache is a small, high aspect ratio foreplane of close-coupled configuration. The surface is typically retractable at high speed and is deployed only for low-speed flight. First seen on the Dassault Milan, and later on the Tupolev Tu-144
Tupolev Tu-144
The Tupolev Tu-144 was a Soviet supersonic transport aircraft and remains one of only two SSTs to enter commercial service, the other being the Concorde...
.

A large aircraft flying fast at low altitude can experience significant aerodynamic buffeting, leading to crew fatigue and reduced airframe life. Aircraft such as the B-1 Lancer
B-1 Lancer
The Rockwell B-1 LancerThe name "Lancer" is only applied to the B-1B version, after the program was revived. is a four-engine variable-sweep wing strategic bomber used by the United States Air Force...
incorporate small canard surfaces as part of an active vibration damping system that reduces these adverse effects.

Some aircraft that have employed this configuration are listed below. A few types are listed twice, for example where the foreplane acts as a control-canard during normal flight and as a close-coupled type at high angles of attack.