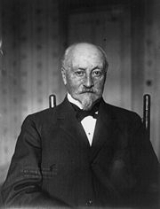 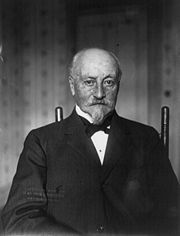 Octave Chanute was a French-born American
United States
The United States of America is a federal constitutional republic comprising fifty states and a federal district...
railway engineer and aviation
Aviation
Aviation is the design, development, production, operation, and use of aircraft, especially heavier-than-air aircraft. Aviation is derived from avis, the Latin word for bird.-History:...
pioneer. He provided the Wright brothers
Wright brothers
The Wright brothers, Orville and Wilbur , were two Americans credited with inventing and building the world's first successful airplane and making the first controlled, powered and sustained heavier-than-air human flight, on December 17, 1903...
with help and advice, and helped to publicize their flying experiments. At his death he was hailed as the father of aviation and the heavier-than-air flying machine. Chanute lies buried in Springdale Cemetery
Springdale Cemetery
Springdale Cemetery is a historic, non-sectarian, active cemetery in the United States city of Peoria, Illinois. It was chartered in 1855, received its first interment in 1857, and has over 70,000 bodies. It contains a public mausoleum and 15 private mausoleums.The property was acquired in 1854,...
, Peoria, Illinois.

Octave Chanute was widely considered a brilliant and innovative railroad engineer. During his career he designed and constructed the United States' two biggest stock yards -- Chicago Stock Yards
Union Stock Yards
The Union Stock Yard & Transit Co., or The Yards, was the meat packing district in Chicago for over a century starting in 1865. The district was operated by a group of railroad companies that acquired swampland, and turned it to a centralized processing area...
(1865) and Kansas City Stockyards
Kansas City Stockyards
The Kansas City Stockyards in the West Bottoms west of downtown Kansas City, Missouri flourished from 1871 until closing in 1991.Jay B. Dillingham was the President of the stockyards from the 1948 to its closing in 1991.-History:...
(1871). He designed and built the Hannibal Bridge
Hannibal Bridge
The First Hannibal Bridge was the first bridge to cross the Missouri River and was to establish Kansas City, Missouri as a major city and rail center....
which was the first bridge to cross the Missouri River
Missouri River
The Missouri River flows through the central United States, and is a tributary of the Mississippi River. It is the longest river in North America and drains the third largest area, though only the thirteenth largest by discharge. The Missouri's watershed encompasses most of the American Great...
in Kansas City, Missouri
Kansas City, Missouri
Kansas City, Missouri is the largest city in the U.S. state of Missouri and is the anchor city of the Kansas City Metropolitan Area, the second largest metropolitan area in Missouri. It encompasses in parts of Jackson, Clay, Cass, and Platte counties...
in 1869. The bridge established Kansas City as the dominant city in the region. He designed many bridges during his railroad career, including the Illinois River
Illinois River
The Illinois River is a principal tributary of the Mississippi River, approximately long, in the State of Illinois. The river drains a large section of central Illinois, with a drainage basin of . This river was important among Native Americans and early French traders as the principal water route...
rail bridge at Peoria
Peoria, Illinois
Peoria is the largest city on the Illinois River and the county seat of Peoria County, Illinois, in the United States. It is named after the Peoria tribe. As of the 2010 census, the city was the seventh-most populated in Illinois, with a population of 115,007, and is the third-most populated...
, the Genesee River Gorge rail bridge near Portageville, New York
Portageville, New York
Portageville is a hamlet located in the town of Genesee Falls in Wyoming County, New York, United States. Its name derives from the Native American canoists who would withdraw their craft from the river to avoid going over three waterfalls in the Genesee River gorge...
, now Letchworth State Park, the bridges at Sibley, Missouri across the Missouri and at Fort Madison, Iowa across the Mississippi and the Kinzua Bridge
Kinzua Bridge
The Kinzua Bridge or the Kinzua Viaduct was a railroad trestle that spanned Kinzua Creek in McKean County in the U.S. state of Pennsylvania...
in Pennsylvania.

Chanute also established a procedure for pressure-treating wooden railroad ties with an anti-septic that increased the wood’s life-span in the tracks. Establishing the first commercial plants, he convinced railroad men that it was commercially feasible to make money by spending money on treating ties to conserve natural resources. As a way to track the age and longevity of railroad ties and other wooden structures, he also introduced the railroad date nail in the United States.

Chanute first became interested in aviation during a visit to Europe in 1875. When he retired from his engineering business in 1890, he decided to devote his time to furthering the new science of aviation.

Applying his engineering background, Chanute collected all the data that he could find from flight experimentors around the world. He published this as a series of articles in The Railroad and Engineering Journal from 1891 to 1893, and collected them together in the influential book Progress in Flying Machine in 1894. This was the most systematic global survey of fixed-wing heavier-than-air aviation research published up to that time.

At the World's Columbian Exposition
World's Columbian Exposition
The World's Columbian Exposition was a World's Fair held in Chicago in 1893 to celebrate the 400th anniversary of Christopher Columbus's arrival in the New World in 1492. Chicago bested New York City; Washington, D.C.; and St...
in Chicago in 1893, Chanute organized a highly successful International Conference on Aerial Navigation.
Chanute was too old to attempt to fly himself, and he partnered with younger experimenters, including Augustus Herring and William Avery. In 1896 and 1897 Chanute, Herring and Avery tested hang gliders based on designs by German aviator Otto Lilienthal
Otto Lilienthal
Otto Lilienthal was a German pioneer of human aviation who became known as the Glider King. He was the first person to make well-documented, repeated, successful gliding flights. He followed an experimental approach established earlier by Sir George Cayley...
, as well as hang gliders of their own design, in the sandhills on the shores of Lake Michigan near the town of Miller Beach
Miller Beach
Miller Beach is a community on the southernmost shore of Lake Michigan. Originally an independent town first settled in 1851, Miller was annexed by the city of Gary, Indiana in 1918...
not far from what would become the city of Gary, Indiana
Gary, Indiana
Gary is a city in Lake County, Indiana, United States. The city is in the southeastern portion of the Chicago metropolitan area and is 25 miles from downtown Chicago. The population is 80,294 at the 2010 census, making it the seventh-largest city in the state. It borders Lake Michigan and is known...
.

These experiments convinced Chanute that the best way to achieve extra lift without a prohibitive increase in weight was to stack several wings one above the other, an idea proposed by British engineer Francis Wenham
Francis Herbert Wenham
Francis Herbert Wenham was a British marine engineer who studied the problem of manned flight and wrote a perceptive and influential academic paper which he presented to the first meeting of the Royal Aeronautical Society in London in 1866.Wenham's report, "Aerial Locomotion," was published in the...
in 1866 and realized in flight by Lilienthal in the 1890s. Chanute invented the "strut-wire" braced wing structure that would be used in powered biplanes of the future. He based the design on the Pratt truss which was familiar to him from his bridge-building work. The Wright brothers based their glider designs on the Chanute "double-decker," as they called it.

Chanute corresponded with many aviation pioneers, including Louis Mouillard
Louis Pierre Mouillard
Louis Pierre Mouillard was a Frenchman who worked on flight in the second half of the 19th century. His thesis, partly based on the investigation of birds in Alexandria, were later adopted by the Wright brothers as their own.He published numerous essays...
, Gabriel Voisin
Gabriel Voisin
Gabriel Voisin was an aviation pioneer and the creator of Europe's first manned, engine-powered, heavier-than-air aircraft capable of a sustained , circular, controlled flight, including take-off and landing. It was flown by Henry Farman on January 13, 1908 near Paris, France...
, John J. Montgomery
John J. Montgomery
John Joseph Montgomery was an aviation pioneer, inventor, professor at Santa Clara College.On August 28, 1883 he made the first manned, controlled, heavier-than-air flights of the United States, in the Otay Mesa area of San Diego, California...
, Louis Blériot
Louis Blériot
Louis Charles Joseph Blériot was a French aviator, inventor and engineer. In 1909 he completed the first flight across a large body of water in a heavier-than-air craft, when he crossed the English Channel. For this achievement, he received a prize of £1,000...
, Ferdinand Ferber, Lawrence Hargrave
Lawrence Hargrave
Lawrence Hargrave was an engineer, explorer, astronomer, inventor and aeronautical pioneer.- Early life :Hargrave was born in Greenwich, England, the second son of John Fletcher Hargrave and was educated at Queen Elizabeth's Grammar School, Kirkby Lonsdale, Westmorland...
and Alberto Santos Dumont. In 1897 Chanute started a correspondence with British aviator Percy Pilcher
Percy Pilcher
Percy Sinclair Pilcher was a British inventor and pioneer aviator who was his country's foremost experimenter in unpowered flight at the end of the 19th Century...
. Following Chanute's ideas, Pilcher built a triplane
Triplane
A triplane is a fixed-wing aircraft equipped with three vertically-stacked wing planes. Tailplanes and canard foreplanes are not normally included in this count, although they may occasionally be.-Design principles:...
, but he was killed in a glider crash before he could attempt to fly it.

Chanute was in contact with the Wright brothers from 1900, when Wilbur Wright wrote to him after reading Progress in Flying Machines. Chanute helped to publicize the Wright brothers' work, and provided consistent encouragement, visiting their camp near Kitty Hawk
Kitty Hawk
Kitty Hawk or Kittyhawk may refer to:Places*Kitty Hawk, North Carolina*Kitty Hawk, is an area of Wright-Patterson Air Force Base*Kitty Hawk Air Society, an Honor Society for the Air Force Junior Reserve Officers' Training Corps programAirlines...
in 1901, 1902 and 1903. The Wrights and Chanute exchanged hundreds of letters from 1900 to 1910.

Chanute freely shared his knowledge about aviation with anyone who was interested and expected others to do the same, although he did encourage colleagues to patent their inventions. His open approach led to friction with the Wright brothers, who believed their ideas about aircraft control were unique and refused to share them. Chanute did not believe that the Wright flying machine patent, premised on wing-warping, could be enforced and said so publicly. The friendship was still impaired when Chanute died in 1910, although Wilbur Wright delivered the eulogy at Chanute's funeral.

"...let us hope that the advent of a successful flying machine, now only dimly foreseen and nevertheless thought to be possible, will bring nothing but good into the world; that it shall abridge distance, make all parts of the globe accessible, bring men into closer relation with each other, advance civilization, and hasten the promised era in which there shall be nothing but peace and good-will among all men."