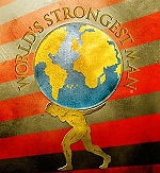 The concept behind "The World's Strongest Men", as it was originally named, was developed in 1977 for CBS
CBS
CBS Broadcasting Inc. is a major US commercial broadcasting television network, which started as a radio network. The name is derived from the initials of the network's former name, Columbia Broadcasting System. The network is sometimes referred to as the "Eye Network" in reference to the shape of...
by Langstar Inc. David Webster
David Webster
David Webster may refer to:* David Webster * David Webster , Chairman of InterContinental Hotels Group* David Webster , Australian TV producer for Ambence Entertainment, creator and writer for Erky Perky* David L...
, a Scot who later received an OBE for his services to sport, was the head coordinator of the competition from its inception. Dr Douglas Edmunds, seven-times Scottish shot and discus champion and twice world caber champion worked with Webster and when David Webster retired from his position Edmunds took over. These two men were responsible for inviting the competitors and choosing the events. In the meantime, in 1982, CBS sold the rights to the BBC
BBC
The British Broadcasting Corporation is a British public service broadcaster. Its headquarters is at Broadcasting House in the City of Westminster, London. It is the largest broadcaster in the world, with about 23,000 staff...
, who in turn sold the rights to TWI. In 1987, the WSM was not held for the only time since its inception. In that year the first and only non-team Pure Strength
Pure Strength
Pure Strength was a strongman competition held from 1987 to 1990 which was created by Tjalling van den Bosch.-Event History:The first year of the event was known as "Pure Strength Challenge" and was a single man competition featuring only Bill Kazmaier, Geoff Capes and Jon Pall Sigmarsson. The...
competition was held but it was not part of the WSM franchise.

In 1995, Edmunds and Webster, along with representatives from the competitors including Jamie Reeves
Jamie Reeves
Jamie Reeves is a former coal miner, strongman and professional wrestler. As a strongman, he won the 1989 World's Strongest Man, was World Muscle Power champion, and also had numerous other titles including Europe's Strongest Man and Britain's Strongest Man...
, Ilkka Kinnunen and Marcel Mostert formed a governing body called the International Federation of Strength Athletes
International Federation of Strength Athletes
The International Federation of Strength Athletes was an international governing body for strongman competition...
("IFSA"). The IFSA began organizing its own bespoke events, such as the IFSA European Championships but also took the lead in working with BBC and TWI to organize the World's Strongest Man competition. For almost a decade the IFSA and WSM were inextricably mixed, but this changed in 2004. The InvestGroup Ventures' sports rights management arm, InvestGroup Sports Management, invested heavily into IFSA and this led to the creation of IFSA Strongman. The strategy was to acquire most of the international assets and properties relating to the strongman sport. In essence this was a new organisation with some, such as Magnus Samuelsson
Magnus Samuelsson
Magnus Samuelsson , is a Swedish strongman and winner of the 1998 World's Strongest Man contest in Morocco...
describing it as "a new company...with the same name as our old federation". The attempt at dominance was not well received by TWI and disagreement ensued leading to a split in the sport. Previously, in 2001, the IFSA in its former guise had entered an agreement with World Class Events (WCE), headed by Ulf Bengtsson, to run the Super Series. This Super Series was designed to award the World Championship title, but also acted as a qualifying vehicle for the WSM. When strongman split in 2004, the Super Series sided with TWI forming a rival federation to the IFSA. With the WSM being a TWI owned event, IFSA Holdings announced its own world championships for 2005, to be held in Quebec, and thus from that point had no involvement in the WSM contest.

The split with IFSA, which banned its registered athletes from competing at WSM, meant that not all the recognised best strength athletes in the world were eligible to compete. However, the reputation of WSM as the premier event maintained its lure for broadcasting purposes. In recent years, the competition has been broadcast on ESPN
ESPN
Entertainment and Sports Programming Network, commonly known as ESPN, is an American global cable television network focusing on sports-related programming including live and pre-taped event telecasts, sports talk shows, and other original programming....
, ESPN2
ESPN2
ESPN2 is an American sports cable television network owned by ESPN. The channel debuted on October 1, 1993.Originally nicknamed "the deuce," ESPN2 was initially branded as a network for a younger generation of sports fans featuring edgier graphics as well as extreme sports like motocross,...
and Five. The longevity of the contest in strength athletics and its high levels of TV exposure over the years has led to it being described as "the granddaddy of all strongman contests". The contest has been criticised in recent years for its slant towards athleticism away from raw strength, with other contests whose emphasis is on the latter, such as the Arnold Strongman Classic
Arnold Strongman Classic
The Arnold Strongman Classic is one of the highest profile events featuring strength athletes in the world. Created by Dr. Terry Todd, it is an offshoot of the Arnold Sports Festival which takes place annually in Columbus, Ohio, USA.-History:...
or Fortissimus
Fortissimus
The Fortissimus is a well recognised event in strength athletics. The name means "the mightiest" and is a multi-event challenge at the end of which the winner is crowned as the "Strongest Man on Earth"...
, being cited as producing the true strongest man in the world. However, it is routinely described as "the Worlds" by top strongman competitors and despite the critics, it is the leading brand name in the field. No other strongman contest commands close to the WSM's levels of TV exposure.

Australia
Australia
Australia , officially the Commonwealth of Australia, is a country in the Southern Hemisphere comprising the mainland of the Australian continent, the island of Tasmania, and numerous smaller islands in the Indian and Pacific Oceans. It is the world's sixth-largest country by total area...
, Estonia
Estonia
Estonia , officially the Republic of Estonia , is a state in the Baltic region of Northern Europe. It is bordered to the north by the Gulf of Finland, to the west by the Baltic Sea, to the south by Latvia , and to the east by Lake Peipsi and the Russian Federation . Across the Baltic Sea lies...
, Faroe Islands
Faroe Islands
The Faroe Islands are an island group situated between the Norwegian Sea and the North Atlantic Ocean, approximately halfway between Scotland and Iceland. The Faroe Islands are a self-governing territory within the Kingdom of Denmark, along with Denmark proper and Greenland...
, Fiji
Fiji
Fiji , officially the Republic of Fiji , is an island nation in Melanesia in the South Pacific Ocean about northeast of New Zealand's North Island...
, France
France
The French Republic , The French Republic , The French Republic , (commonly known as France , is a unitary semi-presidential republic in Western Europe with several overseas territories and islands located on other continents and in the Indian, Pacific, and Atlantic oceans. Metropolitan France...
, Germany
Germany
Germany , officially the Federal Republic of Germany , is a federal parliamentary republic in Europe. The country consists of 16 states while the capital and largest city is Berlin. Germany covers an area of 357,021 km2 and has a largely temperate seasonal climate...
, Grenada
Grenada
Grenada is an island country and Commonwealth Realm consisting of the island of Grenada and six smaller islands at the southern end of the Grenadines in the southeastern Caribbean Sea...
, Hungary
Hungary
Hungary , officially the Republic of Hungary , is a landlocked country in Central Europe. It is situated in the Carpathian Basin and is bordered by Slovakia to the north, Ukraine and Romania to the east, Serbia and Croatia to the south, Slovenia to the southwest and Austria to the west. The...
, Israel
Israel
The State of Israel is a parliamentary republic located in the Middle East, along the eastern shore of the Mediterranean Sea...
, Italy
Italy
Italy , officially the Italian Republic languages]] under the European Charter for Regional or Minority Languages. In each of these, Italy's official name is as follows:;;;;;;;;), is a unitary parliamentary republic in South-Central Europe. To the north it borders France, Switzerland, Austria and...
, Kenya
Kenya
Kenya , officially known as the Republic of Kenya, is a country in East Africa that lies on the equator, with the Indian Ocean to its south-east...
, Namibia
Namibia
Namibia, officially the Republic of Namibia , is a country in southern Africa whose western border is the Atlantic Ocean. It shares land borders with Angola and Zambia to the north, Botswana to the east and South Africa to the south and east. It gained independence from South Africa on 21 March...
, Nigeria
Nigeria
Nigeria , officially the Federal Republic of Nigeria, is a federal constitutional republic comprising 36 states and its Federal Capital Territory, Abuja. The country is located in West Africa and shares land borders with the Republic of Benin in the west, Chad and Cameroon in the east, and Niger in...
, Serbia
Serbia
Serbia , officially the Republic of Serbia , is a landlocked country located at the crossroads of Central and Southeast Europe, covering the southern part of the Carpathian basin and the central part of the Balkans...
and Samoa
Samoa
Samoa , officially the Independent State of Samoa, formerly known as Western Samoa is a country encompassing the western part of the Samoan Islands in the South Pacific Ocean. It became independent from New Zealand in 1962. The two main islands of Samoa are Upolu and one of the biggest islands in...
have all placed in Top 10 but never won a medal.