Encyclopedia
The deadlift is a weight training
Weight training
Weight training is a common type of strength training for developing the strength and size of skeletal muscles. It uses the weight force of gravity to oppose the force generated by muscle through concentric or eccentric contraction...
exercise where a loaded barbell
Barbell
A barbell is a piece of exercise equipment used in weight training, weightlifting and powerlifting. Barbells range in length from to although bars above 7' in length are used primarily by powerlifters and aren't commonplace...
is lifted off the ground from a stabilized, bent over position. It is one of the three canonical powerlifting
Powerlifting
Powerlifting is a strength sport. It resembles the sport of Olympic weightlifting, as both disciplines involve lifting weights in three attempts. Powerlifting evolved from a sport known as 'odd lifts' which followed the same three attempt format but used a wide variety of events akin to Strongman...
exercises, along with the squat
Squat (exercise)
In strength training, the squat is a compound, full body exercise that trains primarily the muscles of the thighs, hips and buttocks, quads , hamstrings, as well as strengthening the bones, ligaments and insertion of the tendons throughout the lower body...
and bench press
Bench press
The bench press is an exercise of the upper body. For bodybuilding purposes, it is used to stimulate the pectorals, deltoids, and triceps. While on his or her back, the person performing the bench press lowers a weight to the level of the chest, then pushes it back up until the arm is straight...
.

Deadlift refers to the lifting of dead(without inertia) weight, such as weights lying on the ground). It is one of the few standard weight training exercises in which all repetitions begin with dead weight. In most other lifts there is an eccentric (lowering of the weight) phase followed by the concentric (lifting of the weight) phase. During these exercises, a small amount of energy is stored in the stretched muscles and tendons in the eccentric phase. However, the deadlift is solely a concentric movement, beginning at its most difficult point and without stored elastic energy, and is therefore considered by some to be a more true test of total strength. 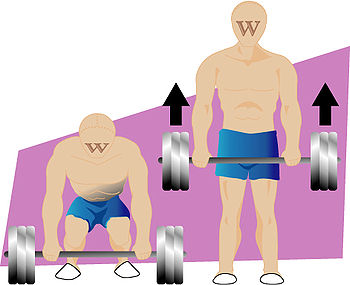 The deadlift is a compound movement that works a variety of muscles groups:

The deadlift activates a large number of individual muscles:

Romanian deadlift: Unlike a standard deadlift, which begins from the floor with a concentric movement, this variation begins from the top. For this reason it is not technically a deadlift. Starting with an eccentric phase and incorporating a stretch reflex
Stretch shortening cycle
A stretch-shortening cycle can be defined as an active stretch of a muscle followed by an immediate shortening of that same muscle.-Research Studies:...
, it eliminates most of the quadriceps contribution, putting more emphasis on the hamstrings and glutes. It is performed by standing with barbell held in front of the body with knees unlocked and bending at the hip while keeping the back straight, then extending the hip to lockout.

Deadlifts can be performed using dumbbells or barbells, with one hand or two hands & with one leg or two legs. Variations are only limited by the athlete's imagination. Other variations are the side deadlift or suitcase deadlift, deadlift from a box, rack pulls, deadlift lockouts, and "Kuck pulls."

The archaic "dead weight lift", or "dead weight lift with lifting bar" involved a T-bar with weight loaded on it while the lifter stood on sturdy chairs or other such platforms. A remarkably heavy amount of weight could be lifted in this manner due to its short range of motion; the main limitations are in the grip. This lift is similar to the modern day rack pulls, where a heavy amount of weight is lifted deadlift style a short distance in a power cage or squat rack.

Typically, there are two grips used: overhand, or pronated, and a mixed overhand-underhand (supinated) (sometimes called "offset," "staggered," "alternating", or "mixed") grip. Depending on forearm strength, the overhand grip may result in the bar potentially rolling about. Some argue the mixed grip is capable of neutralizing this through the "physics of reverse torsion." The mixed grip also allows more weight to be used for this reason.

In order to prevent the bar from rolling out of the hands, some lifters have been known to use an Olympic weightlifting technique known as the "hook" grip. This is similar to an overhand grip, but the thumbs are inside, allowing the lifter to "hook" onto them with the fingers. The hook grip can make it easier to hold heavier weights using less grip strength, and keeps both shoulders and elbows in a symmetrical position. While it theoretically takes much of the stress off of the joints which might be created by the twisting of a mixed grip it has the disadvantage of being extremely uncomfortable for the thumbs, something which those who advocate it says will pass once a lifter becomes accustomed to it. Another, but rarely used method is a combination of the mixed overhand-underhand grip and the hook grip, preferred by people who lift heavier weights than their grip can handle, but who don't want to rely on lifting straps or other supportive gear.

Many powerlifters adopt the overhand grip for their lower weight sets and move to the mixed grip to lift larger weights so they can achieve their one rep max.

The trapbar deadlift is a variation of the deadlift using a special U-shaped bar (a trapbar). This allows more clearance for the knees to pass "through" the bar. To perform the trapbar deadlift, one loads the bar, steps inside the hollow portion of the bar, bends down, grasps the handles, stands erect, then lowers the bar to the ground in the exact opposite path. Proponents of trapbar deadlifts include Hardgainer Magazine, Bob Whelan, the Cyberpump website, and Dr Ken Leistner
Ken Leistner
Ken Leistner is an American strength training writer, personal trainer, strength consultant for the National Football League, and chiropractor. He is often known as "Dr. Ken"....
and iron-game writer Paul Kelso.