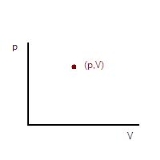 Encyclopedia
A working fluid is a pressurized gas
Gas
Gas is one of the three classical states of matter . Near absolute zero, a substance exists as a solid. As heat is added to this substance it melts into a liquid at its melting point , boils into a gas at its boiling point, and if heated high enough would enter a plasma state in which the electrons...
or liquid
Liquid
Liquid is one of the three classical states of matter . Like a gas, a liquid is able to flow and take the shape of a container. Some liquids resist compression, while others can be compressed. Unlike a gas, a liquid does not disperse to fill every space of a container, and maintains a fairly...
that actuates a machine
Machine
A machine manages power to accomplish a task, examples include, a mechanical system, a computing system, an electronic system, and a molecular machine. In common usage, the meaning is that of a device having parts that perform or assist in performing any type of work...
. Examples include steam in a steam engine
Steam engine
A steam engine is a heat engine that performs mechanical work using steam as its working fluid.Steam engines are external combustion engines, where the working fluid is separate from the combustion products. Non-combustion heat sources such as solar power, nuclear power or geothermal energy may be...
, air in a hot air engine
Hot air engine
A hot air engine is any heat engine which uses the expansion and contraction of air under the influence of a temperature change to convert thermal energy into mechanical work...
and hydraulic fluid
Hydraulic fluid
Hydraulic fluids, also called hydraulic liquids, are the medium by which power is transferred in hydraulic machinery. Common hydraulic fluids are based on mineral oil or water...
in a hydraulic motor
Hydraulic motor
A hydraulic motor is a mechanical actuator that converts hydraulic pressure and flow into torque and angular displacement . The hydraulic motor is the rotary counterpart of the hydraulic cylinder....
or hydraulic cylinder
Hydraulic cylinder
A Hydraulic cylinder is a mechanical actuator that is used to give a unidirectional force through a unidirectional stroke. It has many applications, notably in engineering vehicles.- Operation :...
. More generally, in a thermodynamic system
Thermodynamic system
A thermodynamic system is a precisely defined macroscopic region of the universe, often called a physical system, that is studied using the principles of thermodynamics....
, the working fluid is a liquid or gas that absorbs or transmits energy
Energy
In physics, energy is an indirectly observed quantity. It is often understood as the ability a physical system has to do work on other physical systems...
.

The working fluid properties are essential for the full description of thermodynamic systems. Although working fluids have a very large number of physical properties which can be defined, the thermodynamic properties which are often required in engineering design and analysis are few. Pressure
Pressure
Pressure is the force per unit area applied in a direction perpendicular to the surface of an object. Gauge pressure is the pressure relative to the local atmospheric or ambient pressure.- Definition :...
, temperature
Temperature
Temperature is a physical property of matter that quantitatively expresses the common notions of hot and cold. Objects of low temperature are cold, while various degrees of higher temperatures are referred to as warm or hot...
, enthalpy
Enthalpy
Enthalpy is a measure of the total energy of a thermodynamic system. It includes the internal energy, which is the energy required to create a system, and the amount of energy required to make room for it by displacing its environment and establishing its volume and pressure.Enthalpy is a...
, entropy
Entropy
Entropy is a thermodynamic property that can be used to determine the energy available for useful work in a thermodynamic process, such as in energy conversion devices, engines, or machines. Such devices can only be driven by convertible energy, and have a theoretical maximum efficiency when...
, specific volume
Specific volume
In thermodynamics, the specific volume of a substance is the ratio of the substance's volume to its mass. It is the reciprocal of density:In thermodynamics, the specific volume of a substance is the ratio of the substance's volume to its mass...
and internal energy
Internal energy
In thermodynamics, the internal energy is the total energy contained by a thermodynamic system. It is the energy needed to create the system, but excludes the energy to displace the system's surroundings, any energy associated with a move as a whole, or due to external force fields. Internal...
are the most common.

If at least two thermodynamic properties are known, the state of the working fluid can be defined. This is usually done on a property diagram which is simply a plot of one property versus another. 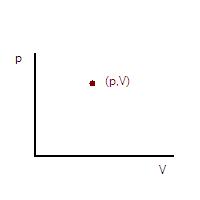 When the working fluid passes through engineering components such as turbines and compressors, the point on a property diagram moves due to the possible changes of certain properties. In theory therefore it is possible to draw a line/curve which fully describes the thermodynamic properties of the fluid. In reality however this can only be done if the process is reversible. If not, the changes in property are represented as a dotted line on a property diagram. This issue does not really affect thermodynamic analysis since in most cases it is the end states of a process which are sought after. 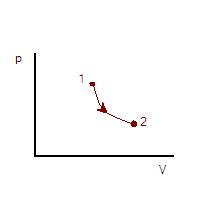 The working fluid can be used to output useful work if used in a turbine
Turbine
A turbine is a rotary engine that extracts energy from a fluid flow and converts it into useful work.The simplest turbines have one moving part, a rotor assembly, which is a shaft or drum with blades attached. Moving fluid acts on the blades, or the blades react to the flow, so that they move and...
. Also, in thermodynamic cycles energy may be input to the working fluid by means of a compressor. The mathematical formulation for this may be quite simple if we consider a cylinder in which a working fluid resides. A piston is used to input useful work to the fluid. From mechanics, the work done from state 1 to state 2 of the process is given by

Where ds is the incremental distance from one state to the next and F is the force applied. The negative sign is introduced since in this case we are considering a decrease in volume. The situation is shown in the figure which follows.

Where A.ds = dV is the elemental change of cylinder volume. If from state 1 to 2 the volume increases then the working fluid actually does work on its surroundings and this is commonly denoted by a negative work. If the volume decreases the work is positive. By the definition given with the above integral the work done is represented by the area under a pressure - volume diagram. If we consider the case where we have a constant pressure process then the work is simply given by 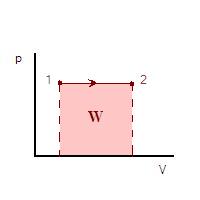 Depending on the application, various types of working fluids are used. In a thermodynamic cycle it may be the case that the working fluid changes state from gas to liquid or vice versa. Certain gases such as Helium can be treated as ideal gases. This is not generally the case for superheated steam and the ideal gas equation does not really hold. At much higher temperatures however it still yields relatively accurate results. The physical and chemical properties of the working fluid are extremely important when designing thermodynamic systems. For instance, in a refrigeration unit, the working fluid is called the refrigerant. Ammonia
Ammonia
Ammonia is a compound of nitrogen and hydrogen with the formula . It is a colourless gas with a characteristic pungent odour. Ammonia contributes significantly to the nutritional needs of terrestrial organisms by serving as a precursor to food and fertilizers. Ammonia, either directly or...
is a typical refrigerant and may be used as the primary working fluid. As compared to water (which can also be used as a refrigerant) the refrigeration cycle using ammonia makes use of relatively high pressures requiring more robust and expensive equipment.

In air standard cycles as in gas turbine
Gas turbine
A gas turbine, also called a combustion turbine, is a type of internal combustion engine. It has an upstream rotating compressor coupled to a downstream turbine, and a combustion chamber in-between....
cycles, the working fluid is air. In the open cycle gas turbine, air enters a compressor where its pressure is increased. The compressor therefore inputs work to the working fluid (positive work). The fluid is then transferred to a combustion chamber where this time heat energy is input by means of the burning of a fuel. The air then expands in a turbine thus doing work against the surroundings (negative work).

Different working fluids have different properties and in choosing one in particular the designer must identify the major requirements. In refrigeration units, high latent heats are required to provide large refrigeration capacities.

The following table gives typical applications of working fluids and examples for each: