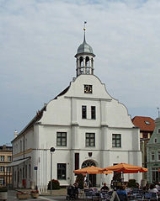 Encyclopedia
Wolgast (ˈvɔlɡast) is a town in the district of Vorpommern-Greifswald
Vorpommern-Greifswald
Vorpommern-Greifswald is a district in the east of Mecklenburg-Vorpommern, Germany. It is bounded by the districts Mecklenburgische Seenplatte, Vorpommern-Rügen, the Baltic Sea, Poland and the state Brandenburg...
, in Mecklenburg-Vorpommern, Germany
Germany
Germany , officially the Federal Republic of Germany , is a federal parliamentary republic in Europe. The country consists of 16 states while the capital and largest city is Berlin. Germany covers an area of 357,021 km2 and has a largely temperate seasonal climate...
. It is situated on the bank of the river Peenestrom
Peenestrom
The Peenestrom is a strait or river in Mecklenburg-Vorpommern, Germany. It is 20 Kilometers long and is the westernmost connection of the Szczecin Lagoon with the Baltic Sea. It is therefore also one of the three distributaries of the Oder....
, vis-a-vis the island of Usedom
Usedom
Usedom is a Baltic Sea island on the border between Germany and Poland. It is situated north of the Szczecin Lagoon estuary of the River Oder in Pomerania...
that can be accessed by road and railway via a bascule bridge
Bascule bridge
A bascule bridge is a moveable bridge with a counterweight that continuously balances the span, or "leaf," throughout the entire upward swing in providing clearance for boat traffic....
(Blaues Wunder). In December 2004, the town held a population of 12,725. 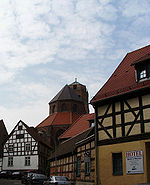 The precursor of present-day Wolgast was a Wendish
Wends
Wends is a historic name for West Slavs living near Germanic settlement areas. It does not refer to a homogeneous people, but to various peoples, tribes or groups depending on where and when it is used...
stronghold, the fort Hologast (alt. Wołogoszcz, Ołogoszcz). In 1123, Hologast surrendered to the Pomeranian
Duchy of Pomerania
The Duchy of Pomerania was a duchy in Pomerania on the southern coast of the Baltic Sea, ruled by dukes of the House of Pomerania ....
duke Wartislaw I
Wartislaw I, Duke of Pomerania
Wartislaw I was the first historical ruler of the Duchy of Pomerania and the founder of the Griffin dynasty....
. In 1128, the Wends were baptized
Conversion of Pomerania
Medieval Pomerania was converted from Slavic paganism to Christianity by Otto von Bamberg in 1124 and 1128 , and in 1168 by Absalon .Earlier attempts, undertaken since the 10th century, failed or were short-lived...
by Otto of Bamberg
Otto of Bamberg
Saint Otto of Bamberg was a medieval German bishop and missionary who, as papal legate, converted much of Pomerania to Christianity.-Life:Otto was born into a noble family in Mistelbach, Franconia...
, who destroyed a local Gerowit temple and set up the St-Petri Church at that site. German
Germans
The Germans are a Germanic ethnic group native to Central Europe. The English term Germans has referred to the German-speaking population of the Holy Roman Empire since the Late Middle Ages....
settlers populated the growing town
Ostsiedlung
Ostsiedlung , also called German eastward expansion, was the medieval eastward migration and settlement of Germans from modern day western and central Germany into less-populated regions and countries of eastern Central Europe and Eastern Europe. The affected area roughly stretched from Slovenia...
soon after, and the city of Wolgast was granted Lübeck law
Lübeck law
The Lübeck law was the constitution of a municipal form of government developed at Lübeck in Schleswig-Holstein after it was made a free city in 1226. The law provides for self-government. It replaced the personal rule of tribal monarchs descending from ancient times or the rule of the regional...
by Wartislaw III in 1282.

During the Thirty Years' War
Thirty Years' War
The Thirty Years' War was fought primarily in what is now Germany, and at various points involved most countries in Europe. It was one of the most destructive conflicts in European history....
, the Swedish Empire
Swedish Empire
The Swedish Empire refers to the Kingdom of Sweden between 1561 and 1721 . During this time, Sweden was one of the great European powers. In Swedish, the period is called Stormaktstiden, literally meaning "the Great Power Era"...
occupied Wolgast in 1630
Treaty of Stettin (1630)
The Treaty of Stettin or Alliance of Stettin was the legal framework for the occupation of the Duchy of Pomerania by the Swedish Empire during the Thirty Years' War...
and kept it as a part of Swedish Pomerania
Swedish Pomerania
Swedish Pomerania was a Dominion under the Swedish Crown from 1630 to 1815, situated on what is now the Baltic coast of Germany and Poland. Following the Polish War and the Thirty Years' War, Sweden held extensive control over the lands on the southern Baltic coast, including Pomerania and parts...
until 1815. The former ducal palace decayed, and the town was burned down in 1713 by Russian forces
Russian Empire
The Russian Empire was a state that existed from 1721 until the Russian Revolution of 1917. It was the successor to the Tsardom of Russia and the predecessor of the Soviet Union...
during the Great Northern War
Great Northern War
The Great Northern War was a conflict in which a coalition led by the Tsardom of Russia successfully contested the supremacy of the Swedish Empire in northern Central Europe and Eastern Europe. The initial leaders of the anti-Swedish alliance were Peter I the Great of Russia, Frederick IV of...
, in retaliation for Swedish arson in Altona
Altona, Hamburg
Altona is the westernmost urban borough of the German city state of Hamburg, on the right bank of the Elbe river. From 1640 to 1864 Altona was under the administration of the Danish monarchy. Altona was an independent city until 1937...
. Only the church, four chapels and four more buildings were spared by the fire. Most houses of the Old Town therefore date back to the 18th and 19th centuries, the townhall was renewed after the fire in baroque
Baroque
The Baroque is a period and the style that used exaggerated motion and clear, easily interpreted detail to produce drama, tension, exuberance, and grandeur in sculpture, painting, literature, dance, and music...
style.

After the Swedish withdrawal from Pomerania in 1815, the city was integrated into the Prussian
Kingdom of Prussia
The Kingdom of Prussia was a German kingdom from 1701 to 1918. Until the defeat of Germany in World War I, it comprised almost two-thirds of the area of the German Empire...
Province of Pomerania. Last remnants of the palace were removed in 1849. Wolgast prospered throughout the 19th century as a port for grain trade.

The town's history is presented in the Stadtgeschichtliches Museum (Towns' historical museum) in a building at the market place nicknamed Kaffeemühle. The former house of painter Phillip Otto Runge is also a museum by now (Rungemuseum).