Encyclopedia
Ernst Wilhelm "Wim" Wenders (born 14 August 1945) is a German
Germans
The Germans are a Germanic ethnic group native to Central Europe. The English term Germans has referred to the German-speaking population of the Holy Roman Empire since the Late Middle Ages....
film director
Film director
A film director is a person who directs the actors and film crew in filmmaking. They control a film's artistic and dramatic nathan roach, while guiding the technical crew and actors.-Responsibilities:...
, playwright
Playwright
A playwright, also called a dramatist, is a person who writes plays.The term is not a variant spelling of "playwrite", but something quite distinct: the word wright is an archaic English term for a craftsman or builder...
, author
Author
An author is broadly defined as "the person who originates or gives existence to anything" and that authorship determines responsibility for what is created. Narrowly defined, an author is the originator of any written work.-Legal significance:...
, photographer and producer
Film producer
A film producer oversees and delivers a film project to all relevant parties while preserving the integrity, voice and vision of the film. They will also often take on some financial risk by using their own money, especially during the pre-production period, before a film is fully financed.The...
.

Set on making his obsession also his life's work, Wenders returned to Germany in 1967 to work in the Düsseldorf office of United Artists
United Artists
United Artists Corporation is an American film studio. The original studio of that name was founded in 1919 by D. W. Griffith, Charles Chaplin, Mary Pickford and Douglas Fairbanks....
. That fall, he entered the "Hochschule für Fernsehen und Film München" (University of Television and Film Munich
University of Television and Film Munich
The University of Television and Film Munich is a publicly funded film school in Munich, Germany. The school was established in 1966 by decree of the Bavarian government. The University of Television and Film Munich is one of Germany's most reputable film schools with about 350 students enrolled...
). Between 1967 and 1970 while at the "HFF", Wenders also worked as a film critic for FilmKritik, then the Munich daily newspaper Süddeutsche Zeitung
Süddeutsche Zeitung
The Süddeutsche Zeitung , published in Munich, is the largest German national subscription daily newspaper.-Profile:The title literally translates as "South German Newspaper". It is read throughout Germany by 1.1 million readers daily and boasts a relatively high circulation abroad...
, Twen magazine, and Der Spiegel
Der Spiegel
Der Spiegel is a German weekly news magazine published in Hamburg. It is one of Europe's largest publications of its kind, with a weekly circulation of more than one million.-Overview:...
.

He has also directed many music videos for groups such as U2
U2
U2 are an Irish rock band from Dublin. Formed in 1976, the group consists of Bono , The Edge , Adam Clayton , and Larry Mullen, Jr. . U2's early sound was rooted in post-punk but eventually grew to incorporate influences from many genres of popular music...
and Talking Heads
Talking Heads
Talking Heads were an American New Wave and avant-garde band formed in 1975 in New York City and active until 1991. The band comprised David Byrne, Chris Frantz, Tina Weymouth and Jerry Harrison...
, including "Stay (Faraway, So Close!)
Stay (Faraway, So Close!)
"Stay " is a song by the rock band U2. It is the fifth track on their 1993 album, Zooropa and was released as the album's third single on 22 November 1993. The song was a top ten hit in the Ireland, Australia, the United Kingdom, and several other countries. The music video was shot in Berlin,...
" and "Sax and Violins
Sax and Violins
"Sax and Violins" is a song by the rock band Talking Heads. It appears on the soundtrack for the film Until the End of the World. It was also released as a successful promo single and charted at number one on the US Modern Rock Tracks chart....
". His television commercials include a UK advertisement for Carling Premier
Carling O'Keefe
Carling O'Keefe originated from Canadian Breweries Limited which was the first brewing conglomerate in Canada and is now owned by Molson Coors Brewing Company.-Carling 1840-1930:...
Canadian beer. 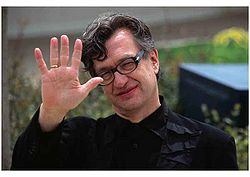 Wenders' book, Emotion Pictures, a collection of diary essays written while a film student, was adapted and broadcast as a series of plays on BBC Radio 3, featuring Peter Capaldi as Wenders, with Gina McKee
Gina McKee
Georgina "Gina" McKee is an English actor known for her television roles in Our Friends in the North , The Lost Prince and The Forsyte Saga ; and her portrayal of Bella in the film Notting Hill ....
, Saskia Reeves
Saskia Reeves
Saskia Reeves is a British actress perhaps best known for her roles in the films Close My Eyes and ID , and the 2000 miniseries Frank Herbert's Dune....
, Dennis Hopper
Dennis Hopper
Dennis Lee Hopper was an American actor, filmmaker and artist. As a young man, Hopper became interested in acting and eventually became a student of the Actors' Studio. He made his first television appearance in 1954 and appeared in two films featuring James Dean, Rebel Without a Cause and Giant...
, Harry Dean Stanton
Harry Dean Stanton
Harry Dean Stanton is an American actor, musician, and singer. Stanton's career has spanned over fifty years, which has seen him star in such films as Paris, Texas, Kelly's Heroes, Dillinger, Alien, Repo Man, The Last Temptation of Christ, Wild at Heart, The Green Mile and The Pledge...
and Ricky Tomlinson
Ricky Tomlinson
Eric Tomlinson , known by his stage name Ricky Tomlinson, is an English actor and comedian, best known for his roles as Bobby Grant in Brookside, DCI Charlie Wise in Cracker and James "Jim" Royle in The Royle Family....
, dramatised by Neil Cargill.

In 2011 he was selected to stage the 2013 cycle of Richard Wagner's Ring der Nibelungen at the Bayreuth Festival, a reflection of his capacity to produce imaginative tributes to great works of art. The project fell through when he insisted on filming in 3-D
Stereoscopy
Stereoscopy refers to a technique for creating or enhancing the illusion of depth in an image by presenting two offset images separately to the left and right eye of the viewer. Both of these 2-D offset images are then combined in the brain to give the perception of 3-D depth...
, which the Wagner family found too costly and disruptive.

2004–05
Pictures from the Surface of the Earth, ARoS Aarhus Kunstmuseum, Århus
C, Denmark 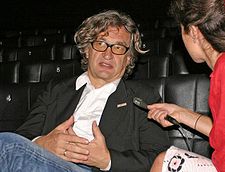