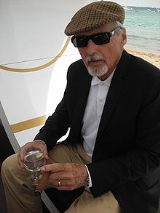 Overview
Dennis Lee Hopper was an American actor, filmmaker and artist
Artist
An artist is a person engaged in one or more of any of a broad spectrum of activities related to creating art, practicing the arts and/or demonstrating an art. The common usage in both everyday speech and academic discourse is a practitioner in the visual arts only...
. As a young man, Hopper became interested in acting and eventually became a student of the Actors' Studio. He made his first television appearance in 1954 and appeared in two films featuring James Dean
James Dean
James Byron Dean was an American film actor. He is a cultural icon, best embodied in the title of his most celebrated film, Rebel Without a Cause , in which he starred as troubled Los Angeles teenager Jim Stark...
, Rebel Without a Cause
Rebel Without a Cause
Rebel Without a Cause is a 1955 American drama film about emotionally confused suburban, middle-class teenagers. Directed by Nicholas Ray, it offered both social commentary and an alternative to previous films depicting delinquents in urban slum environments...
(1955) and Giant (1956). During the next 10 years, Hopper appeared frequently on television in guest roles, and by the end of the 1960s had played supporting roles in several films.

I'm trying to find a Hopper movie set in the 70's?, he plays a shy wormy type guy who gets bullied. He lures his bully to a covered hole were the bull...
More
x