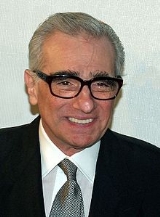 Overview
Martin Charles Scorsese (skɔrˈsɛsi; born November 17, 1942) is an American film director, screenwriter, producer, actor, and film historian. In 1990 he founded The Film Foundation
The Film Foundation
The Film Foundation is a non-profit organization dedicated to film preservation founded by director Martin Scorsese in 1990.-External links:*...
, a nonprofit organization dedicated to film preservation, and in 2007 he founded the World Cinema Foundation
World Cinema Foundation
The World Cinema Foundation is a non-profit organization devoted to the preservation and restoration of neglected world cinema.It was founded in 2007, inspired by the work of The Film Foundation in the United States, a similar venture which Martin Scorsese founded with George Lucas, Stanley...
. He is a recipient of the AFI Life Achievement Award
AFI Life Achievement Award
The AFI Life Achievement Award was established by the Board of Directors of the American Film Institute on February 26, 1973 to honor a single individual for his or her lifetime contribution to enriching American culture through motion pictures and television....
for his contributions to the cinema, and has won Oscars, Emmys
Emmy Award
An Emmy Award, often referred to simply as the Emmy, is a television production award, similar in nature to the Peabody Awards but more focused on entertainment, and is considered the television equivalent to the Academy Awards and the Grammy Awards .A majority of Emmys are presented in various...
, Golden Globes
Golden Globe Award
The Golden Globe Award is an accolade bestowed by the 93 members of the Hollywood Foreign Press Association recognizing excellence in film and television, both domestic and foreign...
, BAFTAs
British Academy Film Awards
The British Academy Film Awards are presented in an annual award show hosted by the British Academy of Film and Television Arts . It is the British counterpart of the Oscars. As of 2008, it has taken place in the Royal Opera House, having taken over from the flagship Odeon cinema on Leicester Square...
, and DGA Awards.

Scorsese's body of work addresses such themes as Italian American identity, Roman Catholic concepts of guilt and redemption
Salvation
Within religion salvation is the phenomenon of being saved from the undesirable condition of bondage or suffering experienced by the psyche or soul that has arisen as a result of unskillful or immoral actions generically referred to as sins. Salvation may also be called "deliverance" or...
, machismo
Machismo
Machismo, or machoism, is a word of Spanish and Portuguese origin that describes prominently exhibited or excessive masculinity. As an attitude, machismo ranges from a personal sense of virility to a more extreme male chauvinism...
, modern crime and violence.