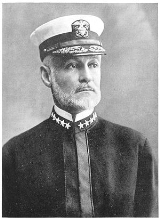 Sims was born to American parents living in Port Hope
Port Hope, Ontario
Port Hope is a municipality in Southern Ontario, Canada, about east of Toronto and about west of Kingston. It is located at the mouth of the Ganaraska River on the north shore of Lake Ontario, in the west end of Northumberland County...
, Ontario, Canada
Canada
Canada is a North American country consisting of ten provinces and three territories. Located in the northern part of the continent, it extends from the Atlantic Ocean in the east to the Pacific Ocean in the west, and northward into the Arctic Ocean...
. He graduated from the United States Naval Academy
United States Naval Academy
The United States Naval Academy is a four-year coeducational federal service academy located in Annapolis, Maryland, United States...
in 1880, the beginnings of an era of naval reform and greater professionalization. Commodore Stephen B. Luce
Stephen Luce
Stephen Bleecker Luce was a U.S. Navy admiral. He was the founder and first president of the Naval War College, between 1884 and 1886.-Biography:...
founded the Naval War College in Newport, Rhode Island
Newport, Rhode Island
Newport is a city on Aquidneck Island in Newport County, Rhode Island, United States, about south of Providence. Known as a New England summer resort and for the famous Newport Mansions, it is the home of Salve Regina University and Naval Station Newport which houses the United States Naval War...
, in 1884, to be the Service's professional school. During the same era, Naval War College instructor Captain Alfred Thayer Mahan
Alfred Thayer Mahan
Alfred Thayer Mahan was a United States Navy flag officer, geostrategist, and historian, who has been called "the most important American strategist of the nineteenth century." His concept of "sea power" was based on the idea that countries with greater naval power will have greater worldwide...
was writing influential books on naval strategy and sea power.

As a young officer, Sims sought to reform naval gunnery by improving target practice. His superiors resisted his suggestions, failing to see the necessity. He was also hindered by his low rank. Never one to let obstacles stand in his way, Sims overcame the opposition by writing directly (in 1902) to President Theodore Roosevelt
Theodore Roosevelt
Theodore "Teddy" Roosevelt was the 26th President of the United States . He is noted for his exuberant personality, range of interests and achievements, and his leadership of the Progressive Movement, as well as his "cowboy" persona and robust masculinity...
. The president, who had previously served as Assistant Secretary of the Navy
Assistant Secretary of the Navy
Assistant Secretary of the Navy is the title given to certain civilian senior officials in the United States Department of the Navy....
, was intrigued by Sims' ideas and made him the Navy's Inspector of Target Practice.

When the United States entered World War I
World War I
World War I , which was predominantly called the World War or the Great War from its occurrence until 1939, and the First World War or World War I thereafter, was a major war centred in Europe that began on 28 July 1914 and lasted until 11 November 1918...
, then-Rear Admiral
Rear admiral (United States)
Rear admiral is a naval commissioned officer rank above that of a commodore and captain, and below that of a vice admiral. The uniformed services of the United States are unique in having two grades of rear admirals.- Rear admiral :...
Sims was serving as president of the Naval War College. Just before the U.S. entered the war, the Wilson
Woodrow Wilson
Thomas Woodrow Wilson was the 28th President of the United States, from 1913 to 1921. A leader of the Progressive Movement, he served as President of Princeton University from 1902 to 1910, and then as the Governor of New Jersey from 1911 to 1913...
Administration sent him to London as a naval representative. After the U.S. entry in April 1917, Sims was given command over U.S. naval forces operating from Britain.

The major threat he faced was a highly effective German submarine campaign against freighters bringing vital food and munitions to the Allies. The combined Anglo-American naval war against U-boats in the western approaches to the British Isles in 1917-18 was a success in part due to the tact and ability of Sims to work smoothly with his British counterpart, Admiral Sir Lewis Bayly
Lewis Bayly (Royal Navy officer)
Sir Lewis Bayly , KCB, KCMG, CVO, was a British admiral during the First World War.-Early life:Bayly was born at Woolwich on 28 September 1857. He was a greatgreatnephew of Admiral Keats. Bayly joined the Royal Navy in 1870. He served in the Third Anglo-Ashanti War and against pirates in the Congo...
, in a very close and friendly working relationship based on mutual respect.

Sims believed the Navy Department in Washington, which was effectively headed by Assistant Secretary Franklin D. Roosevelt
Franklin D. Roosevelt
Franklin Delano Roosevelt , also known by his initials, FDR, was the 32nd President of the United States and a central figure in world events during the mid-20th century, leading the United States during a time of worldwide economic crisis and world war...
, was failing to provide him with sufficient authority, information, autonomy, manpower, and naval forces.

He ended the war as a vice admiral, in command of all U.S. naval forces operating in Europe.

In 1919 after the war ended in Allied victory, Sims publicly attacked the deficiencies of American naval strategy, tactics, policy, and administration. He charged the failures had cost the Allies 2,500,000 tons of supplies, thereby prolonging the war by six months. He estimated the delay had raised the cost of the war to the Allies by $15 billion, and that it led to the unnecessary loss of 500,000 lives. Secretary of the Navy Josephus Daniels
Josephus Daniels
Josephus Daniels was a newspaper editor and publisher from North Carolina who was appointed by United States President Woodrow Wilson to serve as Secretary of the Navy during World War I...
was more of a politician than a naval strategist, but he ably countered the accusations. He pointed to Sims' Anglophilism and said his vantage point in London was too narrow to assess accurately the overall war effort by the U.S. Navy. Daniels cited prewar naval preparations and strategy proposals made by other American leaders during the war to disprove Sims' charges. Much of Sims' criticism of naval administration was deemed valid by a Congressional panel, yet Sims failed in his attempt to discredit Daniels. Congress allowed the chief of naval operations to continue in a weakly subordinate role to the political civilian appointees—a disappointment to many naval professionals who believed an effective Navy had to be run by its ranking officer instead of by a politician with little naval or strategic knowledge. Despite the public acrimony, Sims emerged with his reputation unharmed and served a second tour as president of the Naval War College (1919–1922).

He retired in October 1922. He died in Boston, Massachusetts
Massachusetts
The Commonwealth of Massachusetts is a state in the New England region of the northeastern United States of America. It is bordered by Rhode Island and Connecticut to the south, New York to the west, and Vermont and New Hampshire to the north; at its east lies the Atlantic Ocean. As of the 2010...
, with the rank of full admiral.

Columbia University
Columbia University
Columbia University in the City of New York is a private, Ivy League university in Manhattan, New York City. Columbia is the oldest institution of higher learning in the state of New York, the fifth oldest in the United States, and one of the country's nine Colonial Colleges founded before the...
conferred the honorary degree of doctor of laws upon Rear Admiral Sims on 2 June 1920. Several weeks later, Williams College
Williams College
Williams College is a private liberal arts college located in Williamstown, Massachusetts, United States. It was established in 1793 with funds from the estate of Ephraim Williams. Originally a men's college, Williams became co-educational in 1970. Fraternities were also phased out during this...
conferred on him the honorary degree of doctor of laws during its June 21, 1920, commencement exercises.