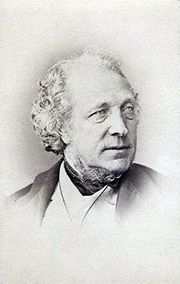 William Leighton Leitch (22 Nov 1804 – 25 April 1883) was a master Scottish
Scotland
Scotland is a country that is part of the United Kingdom. Occupying the northern third of the island of Great Britain, it shares a border with England to the south and is bounded by the North Sea to the east, the Atlantic Ocean to the north and west, and the North Channel and Irish Sea to the...
landscape watercolour
Watercolor painting
Watercolor or watercolour , also aquarelle from French, is a painting method. A watercolor is the medium or the resulting artwork in which the paints are made of pigments suspended in a water-soluble vehicle...
painter and illustrator. He was Drawing Master to Queen Victoria for 22 years. He was Vice President of the Royal Institute of Painters in Watercolours, on Pall Mall in London, for twenty years.

Leitch was born in Glasgow
Glasgow
Glasgow is the largest city in Scotland and third most populous in the United Kingdom. The city is situated on the River Clyde in the country's west central lowlands...
, the son of a soldier who had previously been a sailor. Leitch soon developed a strong inclination for art, and used to practise drawing at night with David Macnee, afterwards president of the Scottish Academy
Royal Scottish Academy
The Royal Scottish Academy is a Scottish organisation that promotes contemporary Scottish art. Founded in 1826, as the Royal Institution for the Encouragement of the Fine Arts, the RSA maintains a unique position in Scotland as an independently funded institution led by eminent artists and...
. After a good general education, he found employment in a lawyer's office, then as a weaver, then as an apprentice to a Mr. Harbut, house-painter and decorator.

In 1824 he was engaged as a scene-painter at the Theatre Royal, Glasgow
Theatre Royal, Glasgow
The Theatre Royal is the oldest theatre in Glasgow, located at 282 Hope Street in Cowcaddens. The theatre originally opened in 1867, changing its name to the Theatre Royal in 1869, and is the longest running theatre in Scotland...
, and married Susannah Smellie, who bore him five sons and two daughters. The theatre failing, he spent two years at Mauchline
Mauchline
Mauchline is a town in East Ayrshire, Scotland. In the 2001 census it had a recorded population of 4105. It lies by the Glasgow and South Western Railway line, 8 miles east-southeast of Kilmarnock and 11 miles northeast of Ayr. It is situated on a gentle slope about 1 mile from the River Ayr,...
, painting snuff boxes, and then came to London
London
London is the capital city of :England and the :United Kingdom, the largest metropolitan area in the United Kingdom, and the largest urban zone in the European Union by most measures. Located on the River Thames, London has been a major settlement for two millennia, its history going back to its...
, where he made the acquaintance of artists David Roberts
David Roberts (painter)
David Roberts RA was a Scottish painter. He is especially known for a prolific series of detailed lithograph prints of Egypt and the Near East that he produced during the 1840s from sketches he made during long tours of the region . These, and his large oil paintings of similar subjects, made him...
and Clarkson Stanfield, and obtained employment as a scene-painter at the Queen's Theatre
Scala Theatre
The Scala Theatre was a theatre in London, sited on Charlotte Street, off Tottenham Court Road, in the London Borough of Camden. The first theatre on the site opened in 1772, and the theatre was demolished in 1969, after being destroyed by fire...
(now demolished) on Charlotte Street
Charlotte Street
Charlotte Street is a well-known street in Fitzrovia, central London, England. The southern half of the street has many restaurants and cafes, and a lively nightlife during the evening; while the northern part of the street is more mixed in character and includes the large office building of the...
. He had some lessons from Copley Fielding
Copley Fielding
Anthony Vandyke Copley Fielding , commonly called Copley Fielding, was an English painter born in Sowerby, near Halifax and famous for his watercolour landscapes. At an early age Fielding became a pupil of John Varley...
, and was employed by Mr. Anderden, a stockbroker, to make drawings for a work he was writing. 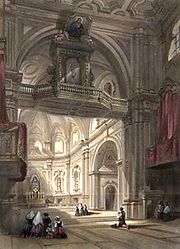 After exhibiting two drawings at the Society of British Artists
Royal Society of British Artists
The Royal Society of British Artists is a British art body established in 1823 as the Society of British Artists, as an alternative to the Royal Academy.-History:...
in 1832, he travelled to the continent in 1833, passing through Holland, Germany, and Switzerland to Italy. While in Venice
Venice
Venice is a city in northern Italy which is renowned for the beauty of its setting, its architecture and its artworks. It is the capital of the Veneto region...
he met and became friends with the Hungarian
Hungary
Hungary , officially the Republic of Hungary , is a landlocked country in Central Europe. It is situated in the Carpathian Basin and is bordered by Slovakia to the north, Ukraine and Romania to the east, Serbia and Croatia to the south, Slovenia to the southwest and Austria to the west. The...
painter, Miklós Barabás
Miklós Barabás
Miklós Barabás was a Hungarian painter. He his mostly known for his portrait paintings....
; They toured and painted in the Lago Maggiore
Lake Maggiore
Lake Maggiore is a large lake located on the south side of the Alps. It is the second largest of Italy and largest of southern Switzerland. Lake Maggiore is the most westerly of the three great prealpine lakes of Italy, it extends for about 70 km between Locarno and Arona.The climate is mild...
region in 1834, and Leitch was a great influence on Barabás's future work. After an absence of four years, during which Leitch supported himself mainly by teaching, and had visited the principal cities of Italy, and made numerous sketches there and in Sicily
Sicily
Sicily is a region of Italy, and is the largest island in the Mediterranean Sea. Along with the surrounding minor islands, it constitutes an autonomous region of Italy, the Regione Autonoma Siciliana Sicily has a rich and unique culture, especially with regard to the arts, music, literature,...
, he returned to London in July 1837.

He now devoted himself almost entirely to teaching and drawing in watercolours
Watercolor painting
Watercolor or watercolour , also aquarelle from French, is a painting method. A watercolor is the medium or the resulting artwork in which the paints are made of pigments suspended in a water-soluble vehicle...
. He had great success as a teacher and could count many members of the aristocracy amongst his pupils. He was introduced to Queen Victoria
Victoria of the United Kingdom
Victoria was the monarch of the United Kingdom of Great Britain and Ireland from 20 June 1837 until her death. From 1 May 1876, she used the additional title of Empress of India....
by Lady Canning
Charlotte Canning, Countess Canning
Charlotte Canning , one of the most prolific women artists in India, was the wife of Charles Canning, 1st Earl Canning. Two portfolios in the V&A, contain some three hundred and fifty watercolours, the result of four major tours in India...
and became the drawing master to her majesty and the royal family for 22 years. The Princess of Wales
Alexandra of Denmark
Alexandra of Denmark was the wife of Edward VII of the United Kingdom...
was his last pupil.

Leitch died in April 1883 at his home in St. John's Wood. A posthumous collection of his works was exhibited at the Institute of Painters in Water Colours' gallery in Piccadilly
Piccadilly
Piccadilly is a major street in central London, running from Hyde Park Corner in the west to Piccadilly Circus in the east. It is completely within the city of Westminster. The street is part of the A4 road, London's second most important western artery. St...
. Only two of his children survived him. His eldest son, Robert, a good watercolour painter, died in 1882.

Leitch was a master of his art, which was based on a profound study of nature and of the great masters, especially Turner
J. M. W. Turner
Joseph Mallord William Turner RA was an English Romantic landscape painter, watercolourist and printmaker. Turner was considered a controversial figure in his day, but is now regarded as the artist who elevated landscape painting to an eminence rivalling history painting...
in his prime. His works are marked by their graceful composition, their pure colour, and the brilliant effects of atmosphere.

Among the books illustrated with engravings from his drawings are the Rev. Robert Walsh's "Constantinople and the Turkish empire" (1838); George Newenham Wright
George Newenham Wright
George Newenham Wright, , was an Irish writer and Anglican clergyman. He was born in Dublin; his father, John Thomas was a doctor. He graduated B.A. from Trinity College in 1814 and M.A. in 1817...
's "The Rhine, Italy and Greece" (1840), and "Shores and islands of the Mediterranean" (1841), William Brockedon's "Italy" (1843), Sir T. D. Lauder's "Memorial of the royal progress in Scotland" (1843), and John Parker Lawson
John Parker Lawson
John Parker Lawson was a clergyman of the Episcopal Church of Scotland and historian.-Life:Ordained a minister in the Episcopal Church of Scotland, he was for some time a chaplain in the British Army...
's "Scotland delineated" (1847–54). The sketches in his possession at his death, with a very few finished drawings and oil pictures, were sold at Christie's
Christie's
Christie's is an art business and a fine arts auction house.- History :The official company literature states that founder James Christie conducted the first sale in London, England, on 5 December 1766, and the earliest auction catalogue the company retains is from December 1766...
in March 1884, and brought upwards of 9,000 pounds.