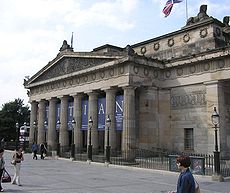 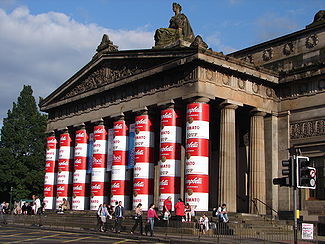 The Royal Scottish Academy (RSA) is a Scottish
Scotland
Scotland is a country that is part of the United Kingdom. Occupying the northern third of the island of Great Britain, it shares a border with England to the south and is bounded by the North Sea to the east, the Atlantic Ocean to the north and west, and the North Channel and Irish Sea to the...
organisation that promotes contemporary
Contemporary art
Contemporary art can be defined variously as art produced at this present point in time or art produced since World War II. The definition of the word contemporary would support the first view, but museums of contemporary art commonly define their collections as consisting of art produced...
Scottish art
Scottish art
The history of Scottish art which we can take to mean the visual art produced within the modern political boundary of Scotland since the earliest times, forms a distinctive tradition within British and European art...
. Founded in 1826, as the Royal Institution for the Encouragement of the Fine Arts, the RSA maintains a unique position in Scotland as an independently funded institution led by eminent artist
Artist
An artist is a person engaged in one or more of any of a broad spectrum of activities related to creating art, practicing the arts and/or demonstrating an art. The common usage in both everyday speech and academic discourse is a practitioner in the visual arts only...
s and architect
Architect
An architect is a person trained in the planning, design and oversight of the construction of buildings. To practice architecture means to offer or render services in connection with the design and construction of a building, or group of buildings and the space within the site surrounding the...
s to promote and support the creation, understanding, and enjoyment of visual arts through exhibitions and related educational events. The RSA is separate from the Royal Academy
Royal Academy
The Royal Academy of Arts is an art institution based in Burlington House on Piccadilly, London. The Royal Academy of Arts has a unique position in being an independent, privately funded institution led by eminent artists and architects whose purpose is to promote the creation, enjoyment and...
in London
London
London is the capital city of :England and the :United Kingdom, the largest metropolitan area in the United Kingdom, and the largest urban zone in the European Union by most measures. Located on the River Thames, London has been a major settlement for two millennia, its history going back to its...
, though there are links between the two organisations.

In addition to a continuous programme of innovative and exciting new exhibitions, the RSA also administers scholarships, awards, and residencies for artists who live and work in Scotland. The RSA's historic collection of important artworks and an extensive archive of related material chronicling art and architecture in Scotland over the last 180 years are housed in the Dean Gallery
Dean Gallery
The Dean Gallery is an art gallery in Edinburgh, Scotland, and is part of the National Galleries of Scotland. It was opened in 1999, opposite the Scottish National Gallery of Modern Art, which is its sister gallery. As the result of a rebranding exercise in 2011, the buildings have now been...
, and are available to researchers by appointment. Displays of the historic collections are mounted whenever possible.

The RSA is led by a body of eminent artist and architect members who encompass a broad cross-section of contemporary Scottish art. Members are known as Academicians, and are entitled to use the postnominal letters RSA. Academicians are elected to the Academy by their peers. There are also Honorary
Honorary
An honorary position is an unpaid position. Other uses include:* honorary title — awarded as a mark of distinction** honorary citizenship — awarded to aliens who have rendered service to the state...
Academicians (HRSA), including the RSA's patron, the Duke of Edinburgh. After amendments to the Supplementary Charter in 2005, once Associates have submitted a Diploma work into the Permanent Collection of the RSA, they are then entitled to full membership of the Academy. The membership includes 30 Honorary Academicians and 104 Academicians. As of 2010, the RSA President is Professor Bill Scott, Secretary Arthur Watson and Treasurer Professor Ian Howard.
The source of this article is wikipedia, the free encyclopedia.  The text of this article is licensed under the GFDL.