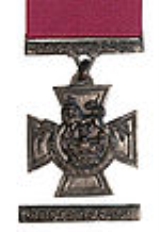 On 27/28 August 1918 on the Fresnes-Rouvroy line, France
France
The French Republic , The French Republic , The French Republic , (commonly known as France , is a unitary semi-presidential republic in Western Europe with several overseas territories and islands located on other continents and in the Indian, Pacific, and Atlantic oceans. Metropolitan France...
, the brigade of which Lieutenant Colonel Clark-Kennedy's battalion was a central unit suffered heavy casualties. At this juncture the colonel encouraged his men and led them forward, then by controlling the direction of neighbouring units and collecting stragglers he enabled the whole brigade front to advance. Next day he was severely wounded, but despite intense pain and loss of blood, he refused to be evacuated until he had gained a position from which the advance could be resumed.