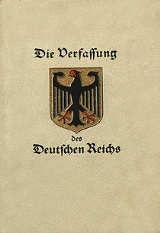 Encyclopedia
The Weimar National Assembly governed Germany
Germany
Germany , officially the Federal Republic of Germany , is a federal parliamentary republic in Europe. The country consists of 16 states while the capital and largest city is Berlin. Germany covers an area of 357,021 km2 and has a largely temperate seasonal climate...
from February 6, 1919 to June 6, 1920 and drew up the new constitution
Weimar constitution
The Constitution of the German Reich , usually known as the Weimar Constitution was the constitution that governed Germany during the Weimar Republic...
which governed Germany from 1919 to 1933
History of Germany
The concept of Germany as a distinct region in central Europe can be traced to Roman commander Julius Caesar, who referred to the unconquered area east of the Rhine as Germania, thus distinguishing it from Gaul , which he had conquered. The victory of the Germanic tribes in the Battle of the...
, technically remaining in effect even until the end of Nazi rule
Nazi Germany
Nazi Germany , also known as the Third Reich , but officially called German Reich from 1933 to 1943 and Greater German Reich from 26 June 1943 onward, is the name commonly used to refer to the state of Germany from 1933 to 1945, when it was a totalitarian dictatorship ruled by...
in 1945. It convened in Weimar
Weimar
Weimar is a city in Germany famous for its cultural heritage. It is located in the federal state of Thuringia , north of the Thüringer Wald, east of Erfurt, and southwest of Halle and Leipzig. Its current population is approximately 65,000. The oldest record of the city dates from the year 899...
, Thuringia
Thuringia
The Free State of Thuringia is a state of Germany, located in the central part of the country.It has an area of and 2.29 million inhabitants, making it the sixth smallest by area and the fifth smallest by population of Germany's sixteen states....
and is the reason for this period in German history being known as the Weimar Republic
Weimar Republic
The Weimar Republic is the name given by historians to the parliamentary republic established in 1919 in Germany to replace the imperial form of government...
.

The elections
German election, 1919
The German elections of January 19, 1919 were the first of the new Weimar Republic following World War I and the Revolution of 1918–19. It was also the first German election according to the system of proportional representation and women's suffrage...
yielded a 38% majority for the SPD, with the Center Party
Centre Party (Germany)
The German Centre Party was a Catholic political party in Germany during the Kaiserreich and the Weimar Republic. Formed in 1870, it battled the Kulturkampf which the Prussian government launched to reduce the power of the Catholic Church...
getting 20% of the votes, the German Democratic Party (DDP) over 18%, the right-wing German National People's Party
German National People's Party
The German National People's Party was a national conservative party in Germany during the time of the Weimar Republic. Before the rise of the NSDAP it was the main nationalist party in Weimar Germany composed of nationalists, reactionary monarchists, völkisch, and antisemitic elements, and...
(DNVP) just over 10%, and the USPD over 7%. The German People's Party
German People's Party
The German People's Party was a national liberal party in Weimar Germany and a successor to the National Liberal Party of the German Empire.-Ideology:...
(DVP), Bavarian Peasants' League
Bavarian Peasants' League
The Bavarian Peasants' League was an agrarian political party in Bavaria, Germany, from 1870-1933. It has also been known in English as the Bavarian Farmers' League....
(BB), German-Hanoverian Party (DHP), Schleswig-Holsteinische Bauern- und Landarbeiterdemokratie
Schleswig-Holsteinische Bauern- und Landarbeiterdemokratie
Schleswig-Holsteinische Bauern- und Landarbeiterdemokratie was a regional agrarian political party based in Schleswig-Holstein during the Weimar Republic...
(SHBLD), and Brunswick Election-Union (BLWV) each attained less than five percent of the vote. The Communist Party
Communist Party of Germany
The Communist Party of Germany was a major political party in Germany between 1918 and 1933, and a minor party in West Germany in the postwar period until it was banned in 1956...
, founded in December 1918, boycotted the elections. The parties were attributed a number of seats proportional to the number of votes they received. 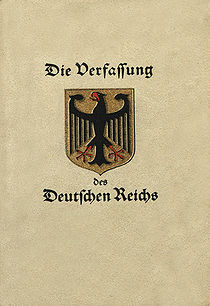 The National Assembly met in Weimar for several reasons: the politicians wanted to avoid the ongoing fights in the capital Berlin, and SPD leader Friedrich Ebert
Friedrich Ebert
Friedrich Ebert was a German politician of the Social Democratic Party of Germany .When Ebert was elected as the leader of the SPD after the death of August Bebel, the party members of the SPD were deeply divided because of the party's support for World War I. Ebert supported the Burgfrieden and...
wanted to remind the victorious World War I Allies
Allies of World War I
The Entente Powers were the countries at war with the Central Powers during World War I. The members of the Triple Entente were the United Kingdom, France, and the Russian Empire; Italy entered the war on their side in 1915...
, who were at the time negotiating a peace treaty
Paris Peace Conference, 1919
The Paris Peace Conference was the meeting of the Allied victors following the end of World War I to set the peace terms for the defeated Central Powers following the armistices of 1918. It took place in Paris in 1919 and involved diplomats from more than 32 countries and nationalities...
with a German delegation, of Weimar Classicism
Weimar Classicism
Weimar Classicism is a cultural and literary movement of Europe. Followers attempted to establish a new humanism by synthesizing Romantic, classical and Enlightenment ideas...
, which included the likes of Goethe
Johann Wolfgang von Goethe
Johann Wolfgang von Goethe was a German writer, pictorial artist, biologist, theoretical physicist, and polymath. He is considered the supreme genius of modern German literature. His works span the fields of poetry, drama, prose, philosophy, and science. His Faust has been called the greatest long...
and Schiller
Friedrich Schiller
Johann Christoph Friedrich von Schiller was a German poet, philosopher, historian, and playwright. During the last seventeen years of his life , Schiller struck up a productive, if complicated, friendship with already famous and influential Johann Wolfgang von Goethe...
. The assembly convened for the first time on February 6. On February 11, it elected Friedrich Ebert President of Germany
President of Germany
The President of the Federal Republic of Germany is the country's head of state. His official title in German is Bundespräsident . Germany has a parliamentary system of government and so the position of President is largely ceremonial...
. With Philipp Scheidemann
Philipp Scheidemann
Philipp Scheidemann was a German Social Democratic politician, who proclaimed the Republic on 9 November 1918, and who became the second Chancellor of the Weimar Republic....
(SPD) as Chancellor, the SPD, the DDP and the Center Party formed a coalition government
Coalition government
A coalition government is a cabinet of a parliamentary government in which several political parties cooperate. The usual reason given for this arrangement is that no party on its own can achieve a majority in the parliament...
which would go into history under the name Weimar Coalition
Weimar Coalition
The Weimar Coalition is the name given to the coalition of the Social Democratic Party of Germany , the German Democratic Party , and the Catholic Centre Party, who together had a large majority of the delegates to the Constituent Assembly that met at Weimar in 1919, and were the principal groups...
. On June 23, after long and arduous debates, the government ratified the Treaty of Versailles
Treaty of Versailles
The Treaty of Versailles was one of the peace treaties at the end of World War I. It ended the state of war between Germany and the Allied Powers. It was signed on 28 June 1919, exactly five years after the assassination of Archduke Franz Ferdinand. The other Central Powers on the German side of...
. On July 31 the Weimar Constitution
Weimar constitution
The Constitution of the German Reich , usually known as the Weimar Constitution was the constitution that governed Germany during the Weimar Republic...
, which was based on a draft by the DDP member Hugo Preuß, was passed by the assembly, and Ebert signed it into law on August 11.


Presidents of the Weimar National Assembly