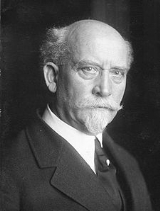 Encyclopedia
Philipp Scheidemann was a German
Germany
Germany , officially the Federal Republic of Germany , is a federal parliamentary republic in Europe. The country consists of 16 states while the capital and largest city is Berlin. Germany covers an area of 357,021 km2 and has a largely temperate seasonal climate...
Social Democratic
Social Democratic Party of Germany
The Social Democratic Party of Germany is a social-democratic political party in Germany...
politician, who proclaimed the Republic on 9 November 1918, and who became the second Chancellor of the Weimar Republic
Weimar Republic
The Weimar Republic is the name given by historians to the parliamentary republic established in 1919 in Germany to replace the imperial form of government...
.

He was by trade a printer, but in 1895 took to editing socialist newspapers, first at Giessen and afterwards successively at Nuremberg
Nuremberg
Nuremberg[p] is a city in the German state of Bavaria, in the administrative region of Middle Franconia. Situated on the Pegnitz river and the Rhine–Main–Danube Canal, it is located about north of Munich and is Franconia's largest city. The population is 505,664...
, Offenbach and Kassel
Kassel
Kassel is a town located on the Fulda River in northern Hesse, Germany. It is the administrative seat of the Kassel Regierungsbezirk and the Kreis of the same name and has approximately 195,000 inhabitants.- History :...
. Scheidemann became a Reichstag
Reichstag (Holy Roman Empire)
The Imperial Diet was the Diet, or general assembly, of the Imperial Estates of the Holy Roman Empire.During the period of the Empire, which lasted formally until 1806, the Diet was not a parliament in today's sense; instead, it was an assembly of the various estates of the realm...
delegate from Solingen
Solingen
Solingen is a city in North Rhine-Westphalia, Germany. It is located on the northern edge of the region called Bergisches Land, south of the Ruhr area, and with a 2009 population of 161,366 is the second largest city in the Bergisches Land...
for the Social Democrats in 1903, and soon rose to be one of the principal leaders of the party. During the First World War
World War I
World War I , which was predominantly called the World War or the Great War from its occurrence until 1939, and the First World War or World War I thereafter, was a major war centred in Europe that began on 28 July 1914 and lasted until 11 November 1918...
, Scheidemann, along with Friedrich Ebert
Friedrich Ebert
Friedrich Ebert was a German politician of the Social Democratic Party of Germany .When Ebert was elected as the leader of the SPD after the death of August Bebel, the party members of the SPD were deeply divided because of the party's support for World War I. Ebert supported the Burgfrieden and...
was leader of the majority faction of the party, which continued to vote for war credits, limiting his opposition to the war to urging the negotiation of a compromise peace. In June 1918, Scheidemann was elected vice-president of the Reichstag. When the Social Democrats were included in the cabinet for the first time in Prince Max of Baden's government in October 1918, Scheidemann entered the government as a minister without portfolio.

Following the Kaiser's abdication on November 9, Prince Max resigned in favour of Ebert. Although the new government intended to support a constitutional monarchy, probably in the person of one of the Kaiser's grandsons, Scheidemann, concerned in the face of a possible workers' revolution in Berlin
Berlin
Berlin is the capital city of Germany and is one of the 16 states of Germany. With a population of 3.45 million people, Berlin is Germany's largest city. It is the second most populous city proper and the seventh most populous urban area in the European Union...
, unilaterally proclaimed the Republic from a balcony in the Reichstag
Reichstag (building)
The Reichstag building is a historical edifice in Berlin, Germany, constructed to house the Reichstag, parliament of the German Empire. It was opened in 1894 and housed the Reichstag until 1933, when it was severely damaged in a fire. During the Nazi era, the few meetings of members of the...
building. The timing of this proclamation was probably due to the expectation of a similar proclamation of a "Workers' Republic" by the communists led by Karl Liebknecht, which indeed followed a couple hours later.

Scheidemann continued to serve as a leader in the Provisional Government
Provisional government
A provisional government is an emergency or interim government set up when a political void has been created by the collapse of a very large government. The early provisional governments were created to prepare for the return of royal rule...
which followed for the next several months, and following the meeting of the National Assembly
Weimar National Assembly
The Weimar National Assembly governed Germany from February 6, 1919 to June 6, 1920 and drew up the new constitution which governed Germany from 1919 to 1933, technically remaining in effect even until the end of Nazi rule in 1945...
in Weimar
Weimar
Weimar is a city in Germany famous for its cultural heritage. It is located in the federal state of Thuringia , north of the Thüringer Wald, east of Erfurt, and southwest of Halle and Leipzig. Its current population is approximately 65,000. The oldest record of the city dates from the year 899...
in February 1919, Ebert was appointed Reich President
Reichspräsident
The Reichspräsident was the German head of state under the Weimar constitution, which was officially in force from 1919 to 1945. In English he was usually simply referred to as the President of Germany...
, and Scheidemann became Chancellor, in the Weimar Coalition
Weimar Coalition
The Weimar Coalition is the name given to the coalition of the Social Democratic Party of Germany , the German Democratic Party , and the Catholic Centre Party, who together had a large majority of the delegates to the Constituent Assembly that met at Weimar in 1919, and were the principal groups...
with the German Democratic Party and the Catholic Center Party. Scheidemann resigned in June along with the DDP owing to disagreement with the Treaty of Versailles
Treaty of Versailles
The Treaty of Versailles was one of the peace treaties at the end of World War I. It ended the state of war between Germany and the Allied Powers. It was signed on 28 June 1919, exactly five years after the assassination of Archduke Franz Ferdinand. The other Central Powers on the German side of...
, and never again served in the government, although he remained active in politics, serving as Mayor of Kassel
Kassel
Kassel is a town located on the Fulda River in northern Hesse, Germany. It is the administrative seat of the Kassel Regierungsbezirk and the Kreis of the same name and has approximately 195,000 inhabitants.- History :...
(1920-1925), and then again as a Reichstag
Reichstag (Weimar Republic)
The Reichstag was the parliament of Weimar Republic .German constitution commentators consider only the Reichstag and now the Bundestag the German parliament. Another organ deals with legislation too: in 1867-1918 the Bundesrat, in 1919–1933 the Reichsrat and from 1949 on the Bundesrat...
delegate, where he exposed military opposition to the Republic. Scheidemann went into exile following the Nazi
Nazism
Nazism, the common short form name of National Socialism was the ideology and practice of the Nazi Party and of Nazi Germany...
takeover in 1933, and died in Denmark shortly after the outbreak of the Second World War.