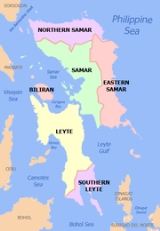 The Waray-Waray language spoken by the Waray people of Samar island and in most parts of Leyte and in some parts of Biliran island shows dialectal variations. Dialects are spoken in some parts of Masbate
Masbate
Masbate is an island province of the Philippines located in the Bicol Region. Its capital is Masbate City and consists of three major islands: Masbate, Ticao and Burias.-History:...
, particularly on the island of Ticao which is adjacent to Samar island.

Waray-waray, like other Philippine languages, does not have any exact equivalent to the English linking verb be. In Tagalog
Tagalog language
Tagalog is an Austronesian language spoken as a first language by a third of the population of the Philippines and as a second language by most of the rest. It is the first language of the Philippine region IV and of Metro Manila...
, for example, the phrase "Siya ay maganda" (She is beautiful) contains the word ay which, contrary to popular belief, does not function as an attributive copula predicating maganda (beautiful) to its subject and topic Siya (he or she). The function of Tagalog's ay is rather a marker of sentence inversion, which is regarded as a literary form but somewhat less common in spoken Tagalog. The same phrase may be spoken as Maganda siya, which has the same meaning.

The Waray-waray language in comparison would express "She is beautiful" only as "Mahosay hiya" or sometimes "Mahosay iton hiya" (iton functioning as a definite article of hiya, she), since Waray doesn't have a present-tense copula or even an inversion marker. As in other Philippine languages, attributive statements are usually represented in predicate-initial form and have no copula at all. Take for example the ordinary English sentence "This is a dog" as translated to Waray:

The predicate Ayam (dog) is placed before the subject ini (this); no copula is present. Another example:

In English: "This is the Waray/Leyte-Samar Visayan Wikipedia". The predicate Amo ini is roughly translated as "This here" but the rest of the sentence then jumps to its subject, marked by the particle an. It is grammatically impossible to invert a sentence like this into a subject-head form without importing the actual Tagalog inversion marker ay, a growing trend among younger people in Leyte. The word amo is used only in Leyte Waray-Waray. In Samar, asya (this) is used.

Despite the debate regarding the Waray copula, it would be safe to treat structures like magin (to be), an magin/an magigin (will be or will become), and an nagin (became) as the English treat linking verbs:

While the now-defunct Sanghiran San Binisaya ha Samar ug Leyte (Academy of the Visayan Language of Samar and Leyte) formulated and recommended a standard orthography, this was never widely disseminated and therefore as of present there is still no commonly accepted official orthography. In effect, there may exist two spellings of the same word (usually limited to differences in vowels only), such as

Waray-Waray is one of the ten officially recognized regional languages in the Philippines and used in local government. It is spoken throughout its islands, especially in the Eastern Visayas region. But it is also spoken in some parts of Mindanao, Masbate, Sorsogon and Metro Manila where Warays have migrated. There is also a small number of Filipinos abroad, especially in the United States, who speak this language. Waray-Waray is widely used in media, especially in radio and television. One good example of this is the regional version of the Philippine news program TV Patrol for Eastern Visayas, TV Patrol Tacloban
TV Patrol Tacloban
TV Patrol Tacloban is the local news rogram of the ABS-CBN Regional Network Group in Tacloban City and in Eastern Visayas.It is aired live daily from the ABS-CBN Broadcasting Center-Tacloban at 5:25 PM, from Monday to Friday and ends at 5:55 PM....
, which broadcasts in Waray-Waray. There is also a regional cable channel that broadcasts its programs in Waray-Waray, the An Aton Channel operated by DYVL. However print media in this language are rare because most regional newspapers are published in English. The language is also used in the eucharistic celebrations or Holy Masses in the Roman Catholic Church
Roman Catholic Church
The Catholic Church, also known as the Roman Catholic Church, is the world's largest Christian church, with over a billion members. Led by the Pope, it defines its mission as spreading the gospel of Jesus Christ, administering the sacraments and exercising charity...
in the region. Bibles published in Waray-Waray are also available. Waray-Waray songs are widely appreciated and can be heard in the radio. In 1993, the LDS Church or Mormonism published a selected Waray-Waray edition of the Book of Mormon entitled "An Libro ni Mormon". Today, many Waray aficionados advocate wider use of this language.

Native numbers are used for numbers one through ten. From eleven onwards, Spanish
Spanish language
Spanish , also known as Castilian , is a Romance language in the Ibero-Romance group that evolved from several languages and dialects in central-northern Iberia around the 9th century and gradually spread with the expansion of the Kingdom of Castile into central and southern Iberia during the...
numbers are exclusively used in Waray-Waray today, their native counterparts being obsolete for the majority of native speakers (except for gatus for hundred and yukot for thousand). Some, especially among the elderly, are spoken alongside the Spanish counterparts.

Some common words and phrases

Below are examples of the Waray spoken in Metropolitan Tacloban and the nearby areas:


Parts of the house


Members of the family