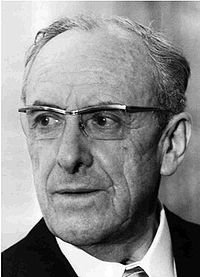 Walter Felsenstein was an Austrian theater and opera
Opera
Opera is an art form in which singers and musicians perform a dramatic work combining text and musical score, usually in a theatrical setting. Opera incorporates many of the elements of spoken theatre, such as acting, scenery, and costumes and sometimes includes dance...
director.

He was one of the most important exponents of textual accuracy, productions in which dramatic and musical values were exquisitely researched and balanced. His most famous students were Götz Friedrich
Götz Friedrich
Götz Friedrich was a German opera and theatre director.He was a student and assistant of Walter Felsenstein at the Komische Oper Berlin in Berlin, where he went on to direct his early productions...
and Harry Kupfer
Harry Kupfer
Harry Kupfer is a German opera director. He studied theatre in Leipzig and directed his first opera, Antonín Dvořák's Rusalka, in 1958....
both of whom went on to have important careers developing Felsenstein's work. Opera director Siegfried Schoenbohm
Siegfried Schoenbohm
Siegfried Schoenbohm was an opera stage director. He was assistant of Walter Felsenstein.He worked at:Komische Oper Berlin ,...
was one of his assistants.

Felsenstein was born in Vienna
Vienna
Vienna is the capital and largest city of the Republic of Austria and one of the nine states of Austria. Vienna is Austria's primary city, with a population of about 1.723 million , and is by far the largest city in Austria, as well as its cultural, economic, and political centre...
and began his career at the Burgtheater
Burgtheater
The Burgtheater , originally known as K.K. Theater an der Burg, then until 1918 as the K.K. Hofburgtheater, is the Austrian National Theatre in Vienna and one of the most important German language theatres in the world.The Burgtheater was created in 1741 and has become known as "die Burg" by the...
in his birthcity and from 1923 to 1932 was a theater actor in Lübeck
Lübeck
The Hanseatic City of Lübeck is the second-largest city in Schleswig-Holstein, in northern Germany, and one of the major ports of Germany. It was for several centuries the "capital" of the Hanseatic League and, because of its Brick Gothic architectural heritage, is listed by UNESCO as a World...
, Mannheim
Mannheim
Mannheim is a city in southwestern Germany. With about 315,000 inhabitants, Mannheim is the second-largest city in the Bundesland of Baden-Württemberg, following the capital city of Stuttgart....
, and Bytom
Bytom
Bytom is a city in Silesia in southern Poland, near Katowice. The central-western district of the Upper Silesian Metropolitan Union - metropolis with the population of 2 millions. Bytom is located in the Silesian Highlands, on the Bytomka river .The city belongs to the Silesian Voivodeship since...
, where he first worked as a director. In Basel
Basel
Basel or Basle In the national languages of Switzerland the city is also known as Bâle , Basilea and Basilea is Switzerland's third most populous city with about 166,000 inhabitants. Located where the Swiss, French and German borders meet, Basel also has suburbs in France and Germany...
and Freiburg im Breisgau, he became closely acquainted with the contemporary concert hall.

From 1932 to 1934 he worked as an opera director in Cologne
Cologne
Cologne is Germany's fourth-largest city , and is the largest city both in the Germany Federal State of North Rhine-Westphalia and within the Rhine-Ruhr Metropolitan Area, one of the major European metropolitan areas with more than ten million inhabitants.Cologne is located on both sides of the...
, and from 1934 to 1936 at Frankfurt
Frankfurt
Frankfurt am Main , commonly known simply as Frankfurt, is the largest city in the German state of Hesse and the fifth-largest city in Germany, with a 2010 population of 688,249. The urban area had an estimated population of 2,300,000 in 2010...
. He worked in Zurich
Zürich
Zurich is the largest city in Switzerland and the capital of the canton of Zurich. It is located in central Switzerland at the northwestern tip of Lake Zurich...
from 1938 to 1940 and returned in 1940 to Germany
Germany
Germany , officially the Federal Republic of Germany , is a federal parliamentary republic in Europe. The country consists of 16 states while the capital and largest city is Berlin. Germany covers an area of 357,021 km2 and has a largely temperate seasonal climate...
, where he was active at the Berlin Schillertheater until 1944. Additionally, he worked as a guest director in Aachen
Theater Aachen
Theater Aachen is a theatre in Aachen, Germany. It is the principal venue in that city for operas, musical theatre, plays, and concerts. It is the home of the Aachen Symphony Orchestra. Construction on the original theatre began in 1822 and it opened on 15 May 1825...
, Düsseldorf
Düsseldorf
Düsseldorf is the capital city of the German state of North Rhine-Westphalia and centre of the Rhine-Ruhr metropolitan region.Düsseldorf is an important international business and financial centre and renowned for its fashion and trade fairs. Located centrally within the European Megalopolis, the...
, Metz
Metz
Metz is a city in the northeast of France located at the confluence of the Moselle and the Seille rivers.Metz is the capital of the Lorraine region and prefecture of the Moselle department. Located near the tripoint along the junction of France, Germany, and Luxembourg, Metz forms a central place...
and Strasbourg
Strasbourg
Strasbourg is the capital and principal city of the Alsace region in eastern France and is the official seat of the European Parliament. Located close to the border with Germany, it is the capital of the Bas-Rhin département. The city and the region of Alsace are historically German-speaking,...
. In 1942 he produced Le nozze di Figaro (Clemens Krauss
Clemens Krauss
Clemens Heinrich Krauss was an Austrian conductor and opera impresario, particularly associated with the music of Richard Strauss.-Biography:...
conducting, sets and costumes by Stefan Hlawa) at the Salzburg
Salzburg
-Population development:In 1935, the population significantly increased when Salzburg absorbed adjacent municipalities. After World War II, numerous refugees found a new home in the city. New residential space was created for American soldiers of the postwar Occupation, and could be used for...
Mozart
Wolfgang Amadeus Mozart
Wolfgang Amadeus Mozart , baptismal name Johannes Chrysostomus Wolfgangus Theophilus Mozart , was a prolific and influential composer of the Classical era. He composed over 600 works, many acknowledged as pinnacles of symphonic, concertante, chamber, piano, operatic, and choral music...
festival.

Together with the "Komische Oper" troupe he visited the USSR a few times. In 1969 he directed the Russian language
Russian language
Russian is a Slavic language used primarily in Russia, Belarus, Uzbekistan, Kazakhstan, Tajikistan and Kyrgyzstan. It is an unofficial but widely spoken language in Ukraine, Moldova, Latvia, Turkmenistan and Estonia and, to a lesser extent, the other countries that were once constituent republics...
production of Carmen
Carmen
Carmen is a French opéra comique by Georges Bizet. The libretto is by Henri Meilhac and Ludovic Halévy, based on the novella of the same title by Prosper Mérimée, first published in 1845, itself possibly influenced by the narrative poem The Gypsies by Alexander Pushkin...
by Bizet at the "Stanislavsky and Nemirovich-Danchenko Moscow Academic Music Theater" in Moscow
Moscow
Moscow is the capital, the most populous city, and the most populous federal subject of Russia. The city is a major political, economic, cultural, scientific, religious, financial, educational, and transportation centre of Russia and the continent...
. In Moscow it was stated that his way of the opera staging was similar to the principles of Konstantin Stanislavsky.

Felsenstein died at age 74 in East Berlin
East Berlin
East Berlin was the name given to the eastern part of Berlin between 1949 and 1990. It consisted of the Soviet sector of Berlin that was established in 1945. The American, British and French sectors became West Berlin, a part strongly associated with West Germany but a free city...
. He is buried in Kloster on Hiddensee
Hiddensee
Hiddensee is a carfree island in the Baltic Sea, located west of Rügen on the German coast.The island, located 54°33' north longitude 13°07' east, has about 1,300 inhabitants. It was a popular vacation destination for East German tourists during German Democratic Republic times and continues to...
, an island in the Baltic Sea
Baltic Sea
The Baltic Sea is a brackish mediterranean sea located in Northern Europe, from 53°N to 66°N latitude and from 20°E to 26°E longitude. It is bounded by the Scandinavian Peninsula, the mainland of Europe, and the Danish islands. It drains into the Kattegat by way of the Øresund, the Great Belt and...
.

He translated and edited numerous operatic works into German, including Carmen
Carmen
Carmen is a French opéra comique by Georges Bizet. The libretto is by Henri Meilhac and Ludovic Halévy, based on the novella of the same title by Prosper Mérimée, first published in 1845, itself possibly influenced by the narrative poem The Gypsies by Alexander Pushkin...
(Georges Bizet
Georges Bizet
Georges Bizet formally Alexandre César Léopold Bizet, was a French composer, mainly of operas. In a career cut short by his early death, he achieved few successes before his final work, Carmen, became one of the most popular and frequently performed works in the entire opera repertory.During a...
, 1949) and La traviata
La traviata
La traviata is an opera in three acts by Giuseppe Verdi set to an Italian libretto by Francesco Maria Piave. It is based on La dame aux Camélias , a play adapted from the novel by Alexandre Dumas, fils. The title La traviata means literally The Fallen Woman, or perhaps more figuratively, The Woman...
(Giuseppe Verdi
Giuseppe Verdi
Giuseppe Fortunino Francesco Verdi was an Italian Romantic composer, mainly of opera. He was one of the most influential composers of the 19th century...
, 1955). Famous productions include Die Zauberflöte (Mozart
Wolfgang Amadeus Mozart
Wolfgang Amadeus Mozart , baptismal name Johannes Chrysostomus Wolfgangus Theophilus Mozart , was a prolific and influential composer of the Classical era. He composed over 600 works, many acknowledged as pinnacles of symphonic, concertante, chamber, piano, operatic, and choral music...
, 1954), Les contes d'Hoffman (Jacques Offenbach
Jacques Offenbach
Jacques Offenbach was a Prussian-born French composer, cellist and impresario. He is remembered for his nearly 100 operettas of the 1850s–1870s and his uncompleted opera The Tales of Hoffmann. He was a powerful influence on later composers of the operetta genre, particularly Johann Strauss, Jr....
, 1958), Otello
Otello
Otello is an opera in four acts by Giuseppe Verdi to an Italian libretto by Arrigo Boito, based on Shakespeare's play Othello. It was Verdi's penultimate opera, and was first performed at the Teatro alla Scala, Milan, on February 5, 1887....
(Verdi, 1959), Barbe-bleue (Offenbach, 1961), The Cunning Little Vixen
The Cunning Little Vixen
The Cunning Little Vixen is an opera by Leoš Janáček, with a libretto adapted by the composer from a serialized novella by Rudolf Těsnohlídek and Stanislav Lolek, which was first published in the newspaper Lidové noviny.-Composition history:When Janáček discovered Těsnohlídek's...
(Leoš Janáček
Leoš Janácek
Leoš Janáček was a Czech composer, musical theorist, folklorist, publicist and teacher. He was inspired by Moravian and all Slavic folk music to create an original, modern musical style. Until 1895 he devoted himself mainly to folkloristic research and his early musical output was influenced by...
, 1956), and A Midsummer Night's Dream
A Midsummer Night's Dream (opera)
A Midsummer Night's Dream is an opera with music by Benjamin Britten and set to a libretto adapted by the composer and Peter Pears from William Shakespeare's play, A Midsummer Night's Dream...
(Benjamin Britten
Benjamin Britten
Edward Benjamin Britten, Baron Britten, OM CH was an English composer, conductor, and pianist. He showed talent from an early age, and first came to public attention with the a cappella choral work A Boy Was Born in 1934. With the premiere of his opera Peter Grimes in 1945, he leapt to...
). The foreign-language operas Felsenstein produced were not usually set in their original tongue, but in a German translation.