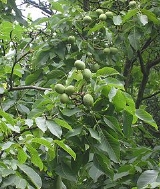 Encyclopedia
The Juglandaceae, also known as the Walnut Family, is a family of tree
Tree
A tree is a perennial woody plant. It is most often defined as a woody plant that has many secondary branches supported clear of the ground on a single main stem or trunk with clear apical dominance. A minimum height specification at maturity is cited by some authors, varying from 3 m to...
s, or sometimes shrubs, in the order Fagales
Fagales
The Fagales are an order of flowering plants, including some of the best known trees. The order name is derived from genus Fagus, Beeches. They belong among the rosid group of dicotyledons...
. Various members of this family are native to the Americas
Americas
The Americas, or America , are lands in the Western hemisphere, also known as the New World. In English, the plural form the Americas is often used to refer to the landmasses of North America and South America with their associated islands and regions, while the singular form America is primarily...
, Eurasia
Eurasia
Eurasia is a continent or supercontinent comprising the traditional continents of Europe and Asia ; covering about 52,990,000 km2 or about 10.6% of the Earth's surface located primarily in the eastern and northern hemispheres...
, and Southeast Asia
Southeast Asia
Southeast Asia, South-East Asia, South East Asia or Southeastern Asia is a subregion of Asia, consisting of the countries that are geographically south of China, east of India, west of New Guinea and north of Australia. The region lies on the intersection of geological plates, with heavy seismic...
.
Members of the walnut family have large aromatic leaves, that are usually alternate, but opposite in Alfaroa
Alfaroa
Alfaroa is a genus of evergreen trees in the Juglandaceae family of the Fagales, growing in montaine and submontaine tropical rain forests in Central America. The wood is characterized by solid pith, pink heartwood, and vessels with scalariform perforations, as well as simple...
and Oreomunnia. The leaves
Leaf
A leaf is an organ of a vascular plant, as defined in botanical terms, and in particular in plant morphology. Foliage is a mass noun that refers to leaves as a feature of plants....
are pinnately compound, or ternate, and usually 20–100 cm long.

The trees are wind-pollinated
Anemophily
Anemophily or wind pollination is a form of pollination whereby pollen is distributed by wind. Anemophilous plants may be either gymnosperms or angiosperms ....
, and the flowers usually arranged in catkin
Catkin
A catkin or ament is a slim, cylindrical flower cluster, with inconspicuous or no petals, usually wind-pollinated but sometimes insect pollinated . They contain many, usually unisexual flowers, arranged closely along a central stem which is often drooping...
s.

There are eight genera in the family, including the commercially important nut
Nut (fruit)
A nut is a hard-shelled fruit of some plants having an indehiscent seed. While a wide variety of dried seeds and fruits are called nuts in English, only a certain number of them are considered by biologists to be true nuts...
-producing trees walnut
Walnut
Juglans is a plant genus of the family Juglandaceae, the seeds of which are known as walnuts. They are deciduous trees, 10–40 meters tall , with pinnate leaves 200–900 millimetres long , with 5–25 leaflets; the shoots have chambered pith, a character shared with the wingnuts , but not the hickories...
(Juglans), pecan
Pecan
The pecan , Carya illinoinensis, is a species of hickory, native to south-central North America, in Mexico from Coahuila south to Jalisco and Veracruz, in the United States from southern Iowa, Illinois, Missouri, and Indiana east to western Kentucky, southwestern Ohio, North Carolina, South...
(Carya illinoinensis), and hickory
Hickory
Trees in the genus Carya are commonly known as hickory, derived from the Powhatan language of Virginia. The genus includes 17–19 species of deciduous trees with pinnately compound leaves and big nuts...
(Carya). The Persian walnut, Juglans regia, is one of the major nut crops of the world. Walnut, hickory, and gaulin are also valuable timber trees.

The known living genera are grouped into subfamilies, tribes, and subtribes as follows: 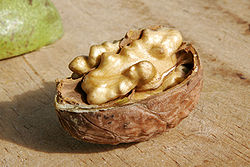 Some fruits are borderline and difficult to categorize. Hickory nuts (Carya) and Walnuts (Juglans) grow within an outer husk; these fruits are technically drupe
Drupe
In botany, a drupe is a fruit in which an outer fleshy part surrounds a shell of hardened endocarp with a seed inside. These fruits develop from a single carpel, and mostly from flowers with superior ovaries...
s or drupaceous nuts, and thus not true botanical nuts. Tryma is a specialized term for such nut-like drupes.
The source of this article is wikipedia, the free encyclopedia.  The text of this article is licensed under the GFDL.