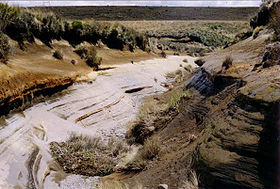 A volcanic plateau is a plateau
Plateau
In geology and earth science, a plateau , also called a high plain or tableland, is an area of highland, usually consisting of relatively flat terrain. A highly eroded plateau is called a dissected plateau...
produced by volcanic activity. There are two main types: lava plateaus and pyroclastic plateaus.

Perhaps the most extensive of all the subaerial
Subaerial
The term subaerial is mainly used in geology to describe events or structures that are located at the Earth's surface...
basaltic plateaus existed during the Paleogene
Paleogene
The Paleogene is a geologic period and system that began 65.5 ± 0.3 and ended 23.03 ± 0.05 million years ago and comprises the first part of the Cenozoic Era...
and possibly extended over 1800000 km² (694,983.9 sq mi) of the northern Atlantic Ocean
Atlantic Ocean
The Atlantic Ocean is the second-largest of the world's oceanic divisions. With a total area of about , it covers approximately 20% of the Earth's surface and about 26% of its water surface area...
region. This region, known as the Thulean Plateau
Thulean Plateau
The Thulean Plateau also known as the Thulean Province, was a great basaltic lava plain that existed during the Paleogene Period, which possibly extended over 1,800,000 km2 in the northern Atlantic Ocean region...
, is generally believed to have been broken up by foundering of the Earth's crust to form the present ocean basin
Oceanic basin
Hydrologically, an oceanic basin may be anywhere on Earth that is covered by seawater, but geologically ocean basins are large geologic basins that are below sea level...
.

The Earth features numerous subaerial and submarine
Submarine volcano
Submarine volcanoes are underwater fissures in the Earth's surface from which magma can erupt. They are estimated to account for 75% of annual magma output. The vast majority are located near areas of tectonic plate movement, known as ocean ridges...
volcanic plateaus such as the Columbia River Plateau
Columbia River Plateau
The Columbia Plateau is a geologic and geographic region that lies across parts of the U.S. states of Washington, Oregon, and Idaho. It is a wide flood basalt plateau between the Cascade Range and the Rocky Mountains, cut through by the Columbia River...
(subaerial) and the vast Ontong Java Plateau
Ontong Java Plateau
The Ontong Java Plateau is a huge oceanic plateau located in the Pacific Ocean, lying north of the Solomon Islands. The plateau covers an area of approximately , or roughly the size of Alaska, and reaches a thickness of up to . The plateau is of volcanic origin, composed mostly of flood basalts...
(submarine).

Pyroclastic volcanic plateaus are produced by massive pyroclastic flows and they are underlain by pyroclastic rock
Pyroclastic rock
Pyroclastic rocks or pyroclastics are clastic rocks composed solely or primarily of volcanic materials. Where the volcanic material has been transported and reworked through mechanical action, such as by wind or water, these rocks are termed volcaniclastic...
s: agglomerate
Agglomerate
Agglomerates are coarse accumulations of large blocks of volcanic material that contain at least 75% bombs...
s, tephra
Tephra
200px|thumb|right|Tephra horizons in south-central [[Iceland]]. The thick and light coloured layer at center of the photo is [[rhyolitic]] tephra from [[Hekla]]....
, volcanic ash
Volcanic ash
Volcanic ash consists of small tephra, which are bits of pulverized rock and glass created by volcanic eruptions, less than in diameter. There are three mechanisms of volcanic ash formation: gas release under decompression causing magmatic eruptions; thermal contraction from chilling on contact...
es cemented into tuff
Tuff
Tuff is a type of rock consisting of consolidated volcanic ash ejected from vents during a volcanic eruption. Tuff is sometimes called tufa, particularly when used as construction material, although tufa also refers to a quite different rock. Rock that contains greater than 50% tuff is considered...
s, mafic or felsic
Felsic
The word "felsic" is a term used in geology to refer to silicate minerals, magma, and rocks which are enriched in the lighter elements such as silicon, oxygen, aluminium, sodium, and potassium....
.

Examples include Shirasu-Daichi
Shirasu-Daichi
is a broad pyroclastic plateau in southern Japan. It covers almost all of southern Kyūshū, which was formed by pyroclastic flows....
, which covers almost all of Southern Kyūshū
Kyushu
is the third largest island of Japan and most southwesterly of its four main islands. Its alternate ancient names include , , and . The historical regional name is referred to Kyushu and its surrounding islands....
, Japan
Japan
Japan is an island nation in East Asia. Located in the Pacific Ocean, it lies to the east of the Sea of Japan, China, North Korea, South Korea and Russia, stretching from the Sea of Okhotsk in the north to the East China Sea and Taiwan in the south...
,, and the North Island Volcanic Plateau
North Island Volcanic Plateau
The North Island Volcanic Plateau is a volcanic plateau covering much of central North Island of New Zealand with volcanoes, lava plateaus, and crater lakes....
in New Zealand
New Zealand
New Zealand is an island country in the south-western Pacific Ocean comprising two main landmasses and numerous smaller islands. The country is situated some east of Australia across the Tasman Sea, and roughly south of the Pacific island nations of New Caledonia, Fiji, and Tonga...
.
The source of this article is wikipedia, the free encyclopedia.  The text of this article is licensed under the GFDL.