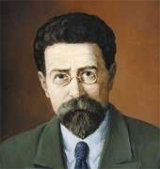 Encyclopedia
Viktor Pavlovich Nogin was a prominent Bolshevik
Bolshevik
The Bolsheviks, originally also Bolshevists , derived from bol'shinstvo, "majority") were a faction of the Marxist Russian Social Democratic Labour Party which split apart from the Menshevik faction at the Second Party Congress in 1903....
in Moscow
Moscow
Moscow is the capital, the most populous city, and the most populous federal subject of Russia. The city is a major political, economic, cultural, scientific, religious, financial, educational, and transportation centre of Russia and the continent...
, holding many high positions in the party and in government, including Chairman of the Moscow Military-Revolutionary Committee and Chairman of the Presidium of the Executive Committee of Moscow Council of Workers' Deputies.

Nogin was considered a "conciliator" Bolshevik. In 1910, following the split between the Bolsheviks and the Menshevik
Menshevik
The Mensheviks were a faction of the Russian revolutionary movement that emerged in 1904 after a dispute between Vladimir Lenin and Julius Martov, both members of the Russian Social-Democratic Labour Party. The dispute originated at the Second Congress of that party, ostensibly over minor issues...
s, he convinced the leadership to try to re-unite the party, despite strong opposition from Lenin
Vladimir Lenin
Vladimir Ilyich Lenin was a Russian Marxist revolutionary and communist politician who led the October Revolution of 1917. As leader of the Bolsheviks, he headed the Soviet state during its initial years , as it fought to establish control of Russia in the Russian Civil War and worked to create a...
. This ultimately failed.

By 1917 Nogin was one of the leaders of the Moscow branch of Bolsheviks. He was a member of the Provisional Committee during the struggle against General Lavr Kornilov
Lavr Kornilov
Lavr Georgiyevich Kornilov was a military intelligence officer, explorer, and general in the Imperial Russian Army during World War I and the ensuing Russian Civil War...
's failed coup
Kornilov Affair
The Kornilov Affair, or the Kornilov Putsch as it is sometimes referred to, was an attempted coup d'état by the then Commander-in-Chief of the Russian Army, General Lavr Kornilov, in August 1917 against the Russian Provisional Government headed by Alexander Kerensky.-Background:Following the...
in Petrograd. As Chairman of the Moscow Military-Revolutionary Committee, Nogin tried to lead a peaceful and bloodless transfer of power to the Bolsheviks, hoping to avoid more bloodshed in Moscow. Before a session of the RSDLP Central Committee on November 1, 1917, he advocated the creation of a coalition government involving all of the socialist parties, claiming that a Bolshevik-only government could only be sustained through terror. He left government on November 4, 1917.

After he formally admitted his mistakes on November 29, 1917, Nogin was appointed to a national post, where he helped restore the nation's textile industry which had been damaged in the revolution. He enjoyed great authority in foreign trade and industry circles.. He accompanied Leonid Krasin
Leonid Krasin
Leonid Borisovich Krasin July 1870, Kurgan – November 24, 1926) was a Russian and Soviet Bolshevik politician and diplomat.-Early years:Krasin was born in Kurgan, near Tobol'sk in Siberia. His father, Boris Ivanovich Krasin was the local chief of police...
to London
London
London is the capital city of :England and the :United Kingdom, the largest metropolitan area in the United Kingdom, and the largest urban zone in the European Union by most measures. Located on the River Thames, London has been a major settlement for two millennia, its history going back to its...
for the negotiations over the Anglo-Soviet Trade Agreement
Anglo-Soviet Trade Agreement
The Anglo-Soviet Trade Agreement was an agreement signed on 16 March 1921 to facilitate trade between the United Kingdom and the Russian Socialist Federal Soviet Republic...
. In 1923, Nogin traveled to the United States to arrange a major cotton purchase. While there, he helped the Coolidge
Calvin Coolidge
John Calvin Coolidge, Jr. was the 30th President of the United States . A Republican lawyer from Vermont, Coolidge worked his way up the ladder of Massachusetts state politics, eventually becoming governor of that state...
administration communicate with Moscow using the code of the Russian government, in an attempt to establish friendly relations between the two countries.

Viktor Nogin is buried in the Kremlin
Kremlin
A kremlin , same root as in kremen is a major fortified central complex found in historic Russian cities. This word is often used to refer to the best-known one, the Moscow Kremlin, or metonymically to the government that is based there...
wall in Red Square
Red Square
Red Square is a city square in Moscow, Russia. The square separates the Kremlin, the former royal citadel and currently the official residence of the President of Russia, from a historic merchant quarter known as Kitai-gorod...
, Moscow.

Some of the Bolshevik party and government positions held by Viktor Nogin are listed below:

The town of Bogorodsk was renamed Noginsk
Noginsk
Noginsk is a town and the administrative center of Noginsky District of Moscow Oblast, Russia, located east of the MKAD ring road on the Klyazma River. Population:...
in his honor in 1930. In 1934, the USSR Post Office produced a 15 Kopeck stamp honoring Viktor Nogin. A station in the Moscow Metro is Kitay-Gorod
Kitay-Gorod (Metro)
Kitay-gorod is a Moscow Metro station on the Kaluzhsko-Rizhskaya and Tagansko-Krasnopresnenskaya lines. It is one of four stations within the Moscow Metro network providing cross-platform interchange ....
, originally called Ploshchad Nogina, after a square in central Moscow that once carried the name of Viktor Nogin (now Slavyanskaya Square
Slavyanskaya Square
Slavyanskaya Square is the square in the center of Moscow, also known in 1924-1991 as northern side of Nogina Square ; the southern side of former Nogina Square is now called Varvarka Gates Square . These two square separates central Kitai-gorod from eastward Tagansky District...
). Streets named after Nogin still exist in St.Petersburg, Nizhniy Novgorod, Volgograd
Volgograd
Volgograd , formerly called Tsaritsyn and Stalingrad is an important industrial city and the administrative center of Volgograd Oblast, Russia. It is long, north to south, situated on the western bank of the Volga River...
, Novosibirsk
Novosibirsk
Novosibirsk is the third-largest city in Russia, after Moscow and Saint Petersburg, and the largest city of Siberia, with a population of 1,473,737 . It is the administrative center of Novosibirsk Oblast as well as of the Siberian Federal District...
, Pavlovskiy Posad, Samara
Samara, Russia
Samara , is the sixth largest city in Russia. It is situated in the southeastern part of European Russia at the confluence of the Volga and Samara Rivers. Samara is the administrative center of Samara Oblast. Population: . The metropolitan area of Samara-Tolyatti-Syzran within Samara Oblast...
, Serpukhov
Serpukhov
Serpukhov is a city in Moscow Oblast, Russia, which is situated at the confluence of the Oka and the Nara Rivers. It is located south from Moscow on the Moscow—Simferopol highway. The Moscow—Tula railway passes through the town. Population: -History:...
and Ramenskoe.
The source of this article is wikipedia, the free encyclopedia.  The text of this article is licensed under the GFDL.