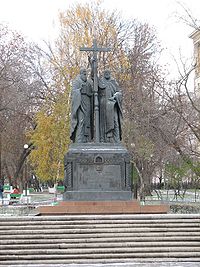 Slavyanskaya Square and southbound Varvarka Gates Square form a contiguous city square, but are officially different locations, a fact that may confuse even Muscovites. To add to this confusion, Staraya Square is not a square per se but a city street (closed to regular traffic) that discharges into Varvarka Gates Square. In the past, Staraya (Old) and Novaya (New) Squares frequently interchanged their names, too. 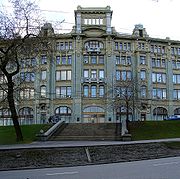 The area was urbanized within 15th century; Kitai-gorod wall was erected in 1530s, on the raised hill. Existing Church of All Saints
Church of All Saints, Moscow
Church of All Saints na Kulichkakh is one of oldest churches in Moscow located at 2, Slavyanskaya Square.First wooden church on this place was built by Dmitry Donskoy most likely in 1380 after the Battle of Kulikovo...
was built in 1480s and subsequently rebuilt in the 17th century.

Until 1934, territories inside the wall developed separately from the rest of the city, retaining medieval congestion until 1890s despite numerous plans to redevelop Kitai-gorod. In the 1890s, Moscow Merchant Society consolidated the blocks within the wall, and built a string of majestic office buildings, notably Boyarsky Dvor facing Varvarka Gates and Staraya Square (by Fyodor Schechtel
Fyodor Schechtel
Fyodor Osipovich Schechtel was a Russian architect, graphic artist and stage designer, the most influential and prolific master of Russian Art Nouveau and late Russian Revival....
), 4 Staraya Square, former Communist Party Headquarters (by Vladimir Sherwood
Vladimir Vladimirovich Sherwood
Vladimir Vladimirovich Sherwood , was a Russian architect who worked in Moscow in 1895-1914 in Art Nouveau style and modernized classics variant of Russian neoclassical revival that predated modernist architecture of 1920s.-Biography:...
Jr.), and Delovoy Dvor (by Ivan Kuznetsov). The square and Solyanka Street acquired the finest examples of late Art Nouveau
Art Nouveau
Art Nouveau is an international philosophy and style of art, architecture and applied art—especially the decorative arts—that were most popular during 1890–1910. The name "Art Nouveau" is French for "new art"...
and Russian neoclassical revival
Russian neoclassical revival
Russian neoclassical revival was a trend in Russian culture, mostly pronounced in architecture, that briefly replaced eclecticism and Art Nouveau as the leading architectural style between the Revolution of 1905 and the outbreak of World War I, coexisting with the Silver Age of Russian Poetry...
, however, developers failed to obtain the permits for demolition of the wall. 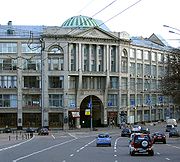 The boulevard north from the square was formed in two stages; first, the old Apple Market near Novaya Square was replaced with a boulevard across Polytechnical Museum
Polytechnical Museum
Polytechnical Museum is a science museum in Moscow that emphasizes the progress of Russian and Soviet technology and science, as well as modern inventions and developments. It was founded in 1872 after the first All-Russian Technical Exhibition on the bicentennial anniversary of the birth of Peter...
(1880s, with the 1887 Plevna Monument). Next, the southern part of the boulevard was cleaned up with the demolition of Varvarka Gated market.

The two squares acquired their present shape in 1934, when the State demolished Kitai-gorod tower blocking the exit from Varvarka Street and the fortress wall between Staraya Square and Kitaisky Lane. Remains of the tower are visible in an underground vestibule of Kitay-Gorod
Kitay-Gorod (Metro)
Kitay-gorod is a Moscow Metro station on the Kaluzhsko-Rizhskaya and Tagansko-Krasnopresnenskaya lines. It is one of four stations within the Moscow Metro network providing cross-platform interchange ....
subway station.

Monument to Saints Cyril and Methodius
Saints Cyril and Methodius
Saints Cyril and Methodius were two Byzantine Greek brothers born in Thessaloniki in the 9th century. They became missionaries of Christianity among the Slavic peoples of Bulgaria, Great Moravia and Pannonia. Through their work they influenced the cultural development of all Slavs, for which they...
by Vyacheslav Klykov
Vyacheslav Klykov
Vyacheslav Mikhailovich Klykov was a Russian sculptor who specialized in public monuments to key figures of national history and culture....
was opened on the northbound boulevard in 1992. The Square is a common starting point for public rallies; in particular, the 2006 Russian March
2006 Russian March
The 2006 Russian March was an extensive enterprise on organizing the wide-ranging nationalist public mass demonstration, one of annual Russian marches in several major Russian cities under the slogan "it's our country", attached to November 4, 2006, the Day of National Unity...
of 4 November 2006.