Encyclopedia
The Anglo-Soviet Trade Agreement was an agreement signed on 16 March 1921 to facilitate trade between the United Kingdom
United Kingdom
The United Kingdom of Great Britain and Northern IrelandIn the United Kingdom and Dependencies, other languages have been officially recognised as legitimate autochthonous languages under the European Charter for Regional or Minority Languages...
and the Russian Socialist Federal Soviet Republic. It was signed by Robert Horne
Robert Horne, 1st Viscount Horne of Slamannan
Robert Stevenson Horne, 1st Viscount Horne of Slamannan GBE, PC, KC was a Scottish businessman, advocate and Unionist politician. He served under David Lloyd George as Minister of Labour between 1919 and 1920, as President of the Board of Trade between 1920 and 1921 and as Chancellor of the...
, Chancellor of the Exchequer
Chancellor of the Exchequer
The Chancellor of the Exchequer is the title held by the British Cabinet minister who is responsible for all economic and financial matters. Often simply called the Chancellor, the office-holder controls HM Treasury and plays a role akin to the posts of Minister of Finance or Secretary of the...
and Leonid Krasin
Leonid Krasin
Leonid Borisovich Krasin July 1870, Kurgan – November 24, 1926) was a Russian and Soviet Bolshevik politician and diplomat.-Early years:Krasin was born in Kurgan, near Tobol'sk in Siberia. His father, Boris Ivanovich Krasin was the local chief of police...
, People's Commissar of Foreign Trade.

Lloyd George first raised the proposal to drop the blockade on Russia
Russia
Russia or , officially known as both Russia and the Russian Federation , is a country in northern Eurasia. It is a federal semi-presidential republic, comprising 83 federal subjects...
, following the October Revolution
October Revolution
The October Revolution , also known as the Great October Socialist Revolution , Red October, the October Uprising or the Bolshevik Revolution, was a political revolution and a part of the Russian Revolution of 1917...
at a meeting of the Allied Supreme Council, held on 14 January 1920, four days after the Treaty of Versailles
Treaty of Versailles
The Treaty of Versailles was one of the peace treaties at the end of World War I. It ended the state of war between Germany and the Allied Powers. It was signed on 28 June 1919, exactly five years after the assassination of Archduke Franz Ferdinand. The other Central Powers on the German side of...
had been ratified. Originally trade was to be restricted to being with the "Russian people", through Centrosoyuz
All Russian Co-operative Society
The All-Russian Co-operative Society was the principal body responsible for the orchestration of Anglo-Russian trade in the early days of Soviet Russia, following the development of Lenin's New Economic Policy...
, the All-Russian Union of Consumer Co-operative Societies. However by the end of May 1920,Leonid Krasin had arrived in London and the terms of the agreement had shifted. Also, although originally an allied proposal, the French declined Lord Curzon's invitation to participate, and the Italians sent a chargé d'affaires
Chargé d'affaires
In diplomacy, chargé d’affaires , often shortened to simply chargé, is the title of two classes of diplomatic agents who head a diplomatic mission, either on a temporary basis or when no more senior diplomat has been accredited.-Chargés d’affaires:Chargés d’affaires , who were...
who only participated in one session. Meanwhile the Bolshevik
Bolshevik
The Bolsheviks, originally also Bolshevists , derived from bol'shinstvo, "majority") were a faction of the Marxist Russian Social Democratic Labour Party which split apart from the Menshevik faction at the Second Party Congress in 1903....
s, upon hearing of the Supreme Council's intention of lifting of the blockade and developing trade
trade with the Co-operatives, responded by taking Centrosoyuz over. Lenin wrote the executive decree promulgated by the Council of People's Commissars on 27 January which put this into effect. Krasin and his fellow delegates were nominally co-opted on to the board of Centrosoyuz,
maintaining the fiction that negotiations were being carried out with the Co-operatives Union.

Krasin was accompanied by Viktor Nogin
Viktor Nogin
Viktor Pavlovich Nogin was a prominent Bolshevik in Moscow, holding many high positions in the party and in government, including Chairman of the Moscow Military-Revolutionary Committee and Chairman of the Presidium of the Executive Committee of Moscow Council of Workers'...
to London to engage in the negotiations. The British Cabinet discussed the proposed agreement at 10 Downing Street
10 Downing Street
10 Downing Street, colloquially known in the United Kingdom as "Number 10", is the headquarters of Her Majesty's Government and the official residence and office of the First Lord of the Treasury, who is now always the Prime Minister....
on 28 May 1920. Lord Curzon had previously briefed the meeting:

'We know from a great variety of sources that the Russian Government is threatened with complete economic disaster, and that it is ready to pay almost any price for the assistance which we - more than anyone else - are in a position to give. We can hardly contemplate coming to its rescue without exacting our price for it, and it seems to me that price can far better be paid in a cessation of Bolshevik hostility in parts of the world important to us, than the ostensible exchange of commodities, the existence of which on any considerable scale in Russia there is grave reason to doubt.'

Faced with an impending meeting with Britain's allies, Lloyd George drew up a four point plan:
Krasin was given 7 days in which to reply and provided passage on board HMS Vimiera
HMS Vimiera (1917)
HMS Vimiera was V-Class destroyer ordered as part of the 1917-18 Program.-Early activity:One of her early missions was a trip to Reval, conveying Leonid Krasin and Viktor Nogin back to the Russian Socialist Federal Soviet Republic, following the first stage of negotiations in the Anglo-Soviet Trade...
to Reval. Georgy Chicherin
Georgy Chicherin
Georgy Vasilyevich Chicherin was a Marxist revolutionary and a Soviet politician. He served as People's Commissar for Foreign Affairs in the Soviet government from March 1918 to 1930.-Childhood and early career:...
responded on 7 July agreeing to these terms in principle. 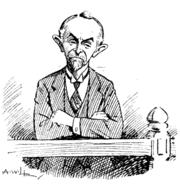 .
Lev Kamenev
Lev Kamenev
Lev Borisovich Kamenev , born Rozenfeld , was a Bolshevik revolutionary and a prominent Soviet politician. He was briefly head of state of the new republic in 1917, and from 1923-24 the acting Premier in the last year of Lenin's life....
was appointed the head of the new negotiating team at Chicherin's insistence over Lenin's objections.

Negotiations were long and protracted. Lenin remarked at the 8th All Russian Congress of Soviets on 21 December 1920:

The treaty, the trade agreement with Britain is not signed yet. At this very moment Krasin is conducting urgent talks on it in London. The British government has handed us its draft, we have given our counterdraft, but it is still obvious that the British government is dragging its feet over the agreement because the reactionary war party is still hard at work there; it has had the upper hand so far and is hindering the conclusion of a trade agreement. It is in our direct interest, and it is our direct duty to give all our support to whatever can help to fortify those parties and groupings who are striving for the signature of this treaty with us.

Ivan Maisky was to underline the importance of the agreement thus:

This diplomatic document, though modest in scope, is of truly historic significance. The Anglo-Soviet Trade Agreement was not an ordinary trade treaty with the mere object of regulating commercial operations between two countries; it was an agreement of politico-commercial character: it gave the RSFSR defacto recognition by the most powerful capitalist power in Europe, a power which in those days still successfully contended with the USA for the role of the foremost capitalist country in the world.