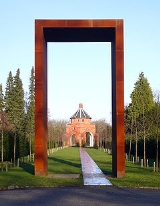 Encyclopedia
Vestre Cemetery is located in a large park setting in the Kongens Enghave
Kongens Enghave
Kongens Enghave , also known as Sydhavnen , is a district in southern Copenhagen. The area has historically been one of the poorest neighbourhoods in Copenhagen, dissected by major transport corridors and characterized by social problems as well as industry along the harbour-front.Since the turn...
district of Copenhagen
Copenhagen
Copenhagen is the capital and largest city of Denmark, with an urban population of 1,199,224 and a metropolitan population of 1,930,260 . With the completion of the transnational Øresund Bridge in 2000, Copenhagen has become the centre of the increasingly integrating Øresund Region...
, Denmark
Denmark
Denmark is a Scandinavian country in Northern Europe. The countries of Denmark and Greenland, as well as the Faroe Islands, constitute the Kingdom of Denmark . It is the southernmost of the Nordic countries, southwest of Sweden and south of Norway, and bordered to the south by Germany. Denmark...
. With its 54 hectare
Hectare
The hectare is a metric unit of area defined as 10,000 square metres , and primarily used in the measurement of land. In 1795, when the metric system was introduced, the are was defined as being 100 square metres and the hectare was thus 100 ares or 1/100 km2...
s it is the largest cemetery
Cemetery
A cemetery is a place in which dead bodies and cremated remains are buried. The term "cemetery" implies that the land is specifically designated as a burying ground. Cemeteries in the Western world are where the final ceremonies of death are observed...
in Denmark.

Beautifully landscaped, it also serves as an important open space
Urban open space
In land use planning, urban open space is open space areas for “parks”, “green spaces”, and other open areas. The landscape of urban open spaces can range from playing fields to highly maintained environments to relatively natural landscapes. They are commonly open to public access, however, urban...
,
popular for people to take a stroll, and look at the old graves and monuments.

The cemetery is one of five run by Copenhagen municipality. The other cemeteries are Assistens Cemetery, Brønshøj Cemetery, Sundby Cemetery, and Bispebjerg Cemetery.

Vestre Kirkegård was opened in 1870 to accommodate an urgent need for adequate burial places for the growing population of Copenhagen. Assistens Cemetery, till then the main cemetery of the city, had long been unable to cope with the increasing number of burials. First a burial place for the poor, Vestre Kirkegaard became the principal burial place during the 1990s.

The cemetery is noted for its beautiful scenery, offers a maze of dense groves, open lawns, winding paths, hedges, overgrown tomb
Tomb
A tomb is a repository for the remains of the dead. It is generally any structurally enclosed interment space or burial chamber, of varying sizes...
s, monuments, tree-lined avenues, ponds and other garden feature
Garden feature
Garden features are physical elements, both natural and manmade, used in garden design.*Avenue*Cascade*Belvedere*Deck*Duck Island, Duck house, or Duck Canopy*Duck pond*Feengrotten*Folly*Fountain*Gazebo*Grotto*Hedge*Herbaceous border*Lawn...
s. Many graves have distinctive gravestones, sculptures or large mausoleum
Mausoleum
A mausoleum is an external free-standing building constructed as a monument enclosing the interment space or burial chamber of a deceased person or persons. A monument without the interment is a cenotaph. A mausoleum may be considered a type of tomb or the tomb may be considered to be within the...
s and are eclectically placed. The cemetery's grounds boast a huge variety of trees with many rare species and is a heaven to birds and small mammals.

The Crossroads Project (Danish: Stjernevejsprojektet) is a garden complex with a pavilion
Pavilion (structure)
In architecture a pavilion has two main meanings.-Free-standing structure:Pavilion may refer to a free-standing structure sited a short distance from a main residence, whose architecture makes it an object of pleasure. Large or small, there is usually a connection with relaxation and pleasure in...
at its centre, designed by Schønher Landskab. It was created in 2003 after Copenhagen Municipality arranged a competition for the regeneration of an area characterized by the abandoned Southern Chapel of the cemetery and elm tree
Elm
Elms are deciduous and semi-deciduous trees comprising the genus Ulmus in the plant family Ulmaceae. The dozens of species are found in temperate and tropical-montane regions of North America and Eurasia, ranging southward into Indonesia. Elms are components of many kinds of natural forests...
s dead from Dutch elm disease
Dutch elm disease
Dutch elm disease is a disease caused by a member of the sac fungi category, affecting elm trees which is spread by the elm bark beetle. Although believed to be originally native to Asia, the disease has been accidentally introduced into America and Europe, where it has devastated native...
. The complex is intended to serve a dual purpose both relating to the locations function as a burial place and as an open space and meeting place in the city, for those seeking piece and silence.

The complex consists of two intersecting axes
Reflection symmetry
Reflection symmetry, reflectional symmetry, line symmetry, mirror symmetry, mirror-image symmetry, or bilateral symmetry is symmetry with respect to reflection. That is, a figure which does not change upon undergoing a reflection has reflectional symmetry.In 2D there is a line of symmetry, in 3D a...
with the former Southern Chapel in its centre. The chapel was partly demolished, leaving only the central part as an open pavilion-like dome
Dome
A dome is a structural element of architecture that resembles the hollow upper half of a sphere. Dome structures made of various materials have a long architectural lineage extending into prehistory....
d structure. The building is partly over-grown by ivy
Ivy
Ivy, plural ivies is a genus of 12–15 species of evergreen climbing or ground-creeping woody plants in the family Araliaceae, native to western, central and southern Europe, Macaronesia, northwestern Africa and across central-southern Asia east to Japan and Taiwan.-Description:On level ground they...
. The surrounding garden spaces of the two axes, creating a Greek cross
Cross
A cross is a geometrical figure consisting of two lines or bars perpendicular to each other, dividing one or two of the lines in half. The lines usually run vertically and horizontally; if they run obliquely, the design is technically termed a saltire, although the arms of a saltire need not meet...
, are confined by tall yew hedges
Taxus baccata
Taxus baccata is a conifer native to western, central and southern Europe, northwest Africa, northern Iran and southwest Asia. It is the tree originally known as yew, though with other related trees becoming known, it may be now known as the English yew, or European yew.-Description:It is a small-...
and have a grass surface. Embedded in the lawns of the cross arms are narrow, rust coloured
Rust (color)
Rust is a red-brown-orange color resembling iron oxide. It is a commonly used color in stage lighting, and appears roughly the same color as photographic safelights when used over a standard tungsten light source. The color is number 777 in the swatch book....
paths made of oxidized iron
Iron oxide
Iron oxides are chemical compounds composed of iron and oxygen. All together, there are sixteen known iron oxides and oxyhydroxides.Iron oxides and oxide-hydroxides are widespread in nature, play an important role in many geological and biological processes, and are widely utilized by humans, e.g.,...
plates, flanked by rows by cherry tree
Cherry
The cherry is the fruit of many plants of the genus Prunus, and is a fleshy stone fruit. The cherry fruits of commerce are usually obtained from a limited number of species, including especially cultivars of the wild cherry, Prunus avium....
s. At the end of each cross arm is a 9 metre tall rust coloured iron arch.

The design of the project is inspired by Bramante
Donato Bramante
Donato Bramante was an Italian architect, who introduced the Early Renaissance style to Milan and the High Renaissance style to Rome, where his most famous design was St...
's Tempietto in Rome
Rome
Rome is the capital of Italy and the country's largest and most populated city and comune, with over 2.7 million residents in . The city is located in the central-western portion of the Italian Peninsula, on the Tiber River within the Lazio region of Italy.Rome's history spans two and a half...
and the baroque
Baroque architecture
Baroque architecture is a term used to describe the building style of the Baroque era, begun in late sixteenth century Italy, that took the Roman vocabulary of Renaissance architecture and used it in a new rhetorical and theatrical fashion, often to express the triumph of the Catholic Church and...
gardens of Villa Gori in Siena
Siena
Siena is a city in Tuscany, Italy. It is the capital of the province of Siena.The historic centre of Siena has been declared by UNESCO a World Heritage Site. It is one of the nation's most visited tourist attractions, with over 163,000 international arrivals in 2008...
. The latter is characterized by the garden being contained in the two axes of the garden, instead of the axes being the connecting feature of the surrounding gardens as is normally the case.

Among the notables interred at the cemetery are political and business leaders, philosophers, artists, and musicians: