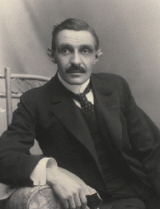 Encyclopedia
Herman Joachim Bang was a Danish author
Author
An author is broadly defined as "the person who originates or gives existence to anything" and that authorship determines responsibility for what is created. Narrowly defined, an author is the originator of any written work.-Legal significance:...
, one of the men of the Modern Breakthrough
Modern Breakthrough
The Modern Breakthrough is the normal name of the strong movement of naturalism and debating literature of Scandinavia near the end of the 19th century which replaced romanticism....
.

Bang was born into a noble family of Asserballe, on the small Danish island of Als, the son of a South Jutlandic vicar (a relative of N. F. S. Grundtvig). His family history was marked by insanity and disease.

When he was twenty he published two volumes of critical essays on the realistic movement. In 1880 he published his novel Haabløse Slægter (Families Without Hope), which aroused immediate attention. The main character was a young man who had a relationship with an older woman. The book was considered obscene at the time and was banned. After some time spent in travel and a successful lecture tour of Norway
Norway
Norway , officially the Kingdom of Norway, is a Nordic unitary constitutional monarchy whose territory comprises the western portion of the Scandinavian Peninsula, Jan Mayen, and the Arctic archipelago of Svalbard and Bouvet Island. Norway has a total area of and a population of about 4.9 million...
and Sweden
Sweden
Sweden , officially the Kingdom of Sweden , is a Nordic country on the Scandinavian Peninsula in Northern Europe. Sweden borders with Norway and Finland and is connected to Denmark by a bridge-tunnel across the Öresund....
, he settled in Copenhagen
Copenhagen
Copenhagen is the capital and largest city of Denmark, with an urban population of 1,199,224 and a metropolitan population of 1,930,260 . With the completion of the transnational Øresund Bridge in 2000, Copenhagen has become the centre of the increasingly integrating Øresund Region...
and produced a series of novels and collections of short stories which placed him in the front rank of Scandinavia
Scandinavia
Scandinavia is a cultural, historical and ethno-linguistic region in northern Europe that includes the three kingdoms of Denmark, Norway and Sweden, characterized by their common ethno-cultural heritage and language. Modern Norway and Sweden proper are situated on the Scandinavian Peninsula,...
n novelists. Among his more famous stories are Fædra (1883) and Tine (Tina, 1889).

The latter won for its author the friendship of Henrik Ibsen
Henrik Ibsen
Henrik Ibsen was a major 19th-century Norwegian playwright, theatre director, and poet. He is often referred to as "the father of prose drama" and is one of the founders of Modernism in the theatre...
and the enthusiastic admiration of Jonas Lie
Jonas Lie
Jonas Lauritz Idemil Lie was a Norwegian novelist, poet, and playwright who is considered to have been one of the Four Greats of 19th century Norwegian literature, together with Henrik Ibsen, Bjørnstjerne Bjørnson and Alexander Kielland.-Background:Jonas Lie was born at Hokksund in Øvre Eiker, in...
. Among his other works are Det hvide Hus (The White House, 1898), Excentriske Noveller (Eccentric Stories, 1885), Stille Eksistenser (Quiet Existences, 1886), Liv og Død (Life and Death, 1899), Englen Michael (The Angel Michael, 1902), a volume of poems (1889), and recollections, Ti Aar (Ten Years, 1891).

Bang was a homosexual, a fact which contributed to his isolation in the cultural life of Denmark and made him the victim of smear campaigns. He lived most of his life with his sister but found happiness for a few years with the German actor Max Eisfeld (1863–1935), with whom he lived in Prague
Prague
Prague is the capital and largest city of the Czech Republic. Situated in the north-west of the country on the Vltava river, the city is home to about 1.3 million people, while its metropolitan area is estimated to have a population of over 2.3 million...
in 1885-86. Uninterested in politics, he was distant from most of his colleagues in the naturalist movement.

Failed as an actor, Bang earned fame as a theatre producer in Paris
Paris
Paris is the capital and largest city in France, situated on the river Seine, in northern France, at the heart of the Île-de-France region...
and in Copenhagen
Copenhagen
Copenhagen is the capital and largest city of Denmark, with an urban population of 1,199,224 and a metropolitan population of 1,930,260 . With the completion of the transnational Øresund Bridge in 2000, Copenhagen has become the centre of the increasingly integrating Øresund Region...
. He was a very productive journalist, writing for Danish, Nordic and German newspapers, developing modern reporting. His article on the fire at Christiansborg Palace
Christiansborg Palace
Christiansborg Palace, , on the islet of Slotsholmen in central Copenhagen, is the seat of the Folketing , the Danish Prime Minister's Office and the Danish Supreme Court...
is a landmark in Danish journalism.

Bang is primarily concerned with the "quiet existences", the disregarded and ignored people living boring and apparently unimportant lives. He is especially interested in describing lonely or isolated women. Ved Vejen (Katinka 1886) describes the secret and never fulfilled passion of a young wife of a stationmaster, living in a barren marriage. Tine (1889), which has the war with Prussia in 1864 (the Second War of Schleswig
Second War of Schleswig
The Second Schleswig War was the second military conflict as a result of the Schleswig-Holstein Question. It began on 1 February 1864, when Prussian forces crossed the border into Schleswig.Denmark fought Prussia and Austria...
) as background, tells the tragic love story of a young girl on the island of Als. Stuk (Stucco, 1887) tells the story of a young man's love affair that is fading away without any real explanation, against the background of the "Gründerzeit" of Copenhagen and its superficial modernization and economic speculation. In Ludvigsbakke (1896) a young nurse squanders her love on a spineless childhood friend, who eventually deserts her in order to save his estate by marrying a rich heiress.

Bang's works earned him renown as a leading European impressionist writer. Bang's last years were embittered by persecutions and declining health. He traveled widely in Europe, and during a lecture tour of the United States he was taken ill on the train and died in Ogden, Utah
Ogden, Utah
Ogden is a city in Weber County, Utah, United States. Ogden serves as the county seat of Weber County. The population was 82,825 according to the 2010 Census. The city served as a major railway hub through much of its history, and still handles a great deal of freight rail traffic which makes it a...
.