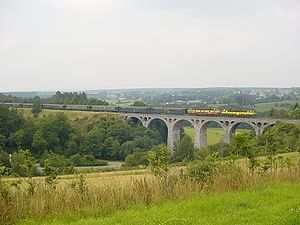 The Vennbahn is a former railway line
Rail transport
Rail transport is a means of conveyance of passengers and goods by way of wheeled vehicles running on rail tracks. In contrast to road transport, where vehicles merely run on a prepared surface, rail vehicles are also directionally guided by the tracks they run on...
that was built partly across German territory, but is now entirely in Belgium
Belgium
Belgium , officially the Kingdom of Belgium, is a federal state in Western Europe. It is a founding member of the European Union and hosts the EU's headquarters, and those of several other major international organisations such as NATO.Belgium is also a member of, or affiliated to, many...
, because the trackbed of the line, as well as the stations and other installations, were made Belgian territory in 1919 under a provision of the Treaty of Versailles
Treaty of Versailles
The Treaty of Versailles was one of the peace treaties at the end of World War I. It ended the state of war between Germany and the Allied Powers. It was signed on 28 June 1919, exactly five years after the assassination of Archduke Franz Ferdinand. The other Central Powers on the German side of...
. This had the effect of creating about five small exclaves of Germany on the line's western side (the exact number varies according to source). 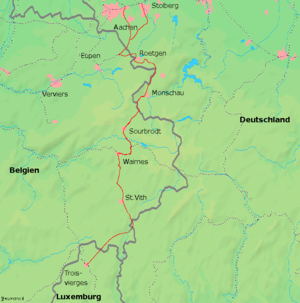 Until the end of 2001, the Vennbahn line operated tourist services, some of which were steam-hauled
Steam locomotive
A steam locomotive is a railway locomotive that produces its power through a steam engine. These locomotives are fueled by burning some combustible material, usually coal, wood or oil, to produce steam in a boiler, which drives the steam engine...
. These were withdrawn for want of funds to maintain the line. Part of the track between Kalterherberg and Sourbrodt is now used by railbikes
Draisine
A draisine primarily refers to a light auxiliary rail vehicle, driven by service personnel, equipped to transport crew and material necessary for the maintenance of railway infrastructure....
.

It was reported in 2008 that, with the Vennbahn no longer operational, Belgium might have to surrender the land where the line passes through Germany, so that the exclaves would no longer be exclaves. However, the foreign ministries of Germany and Belgium have since confirmed that the trackbed, even though disused, will continue to be Belgian territory and that the German exclaves will therefore remain.

By December 4, 2007, the dismantling of the now disused line had started; by September 2008, the track had been completely removed between Trois-Ponts and Sourbrodt.